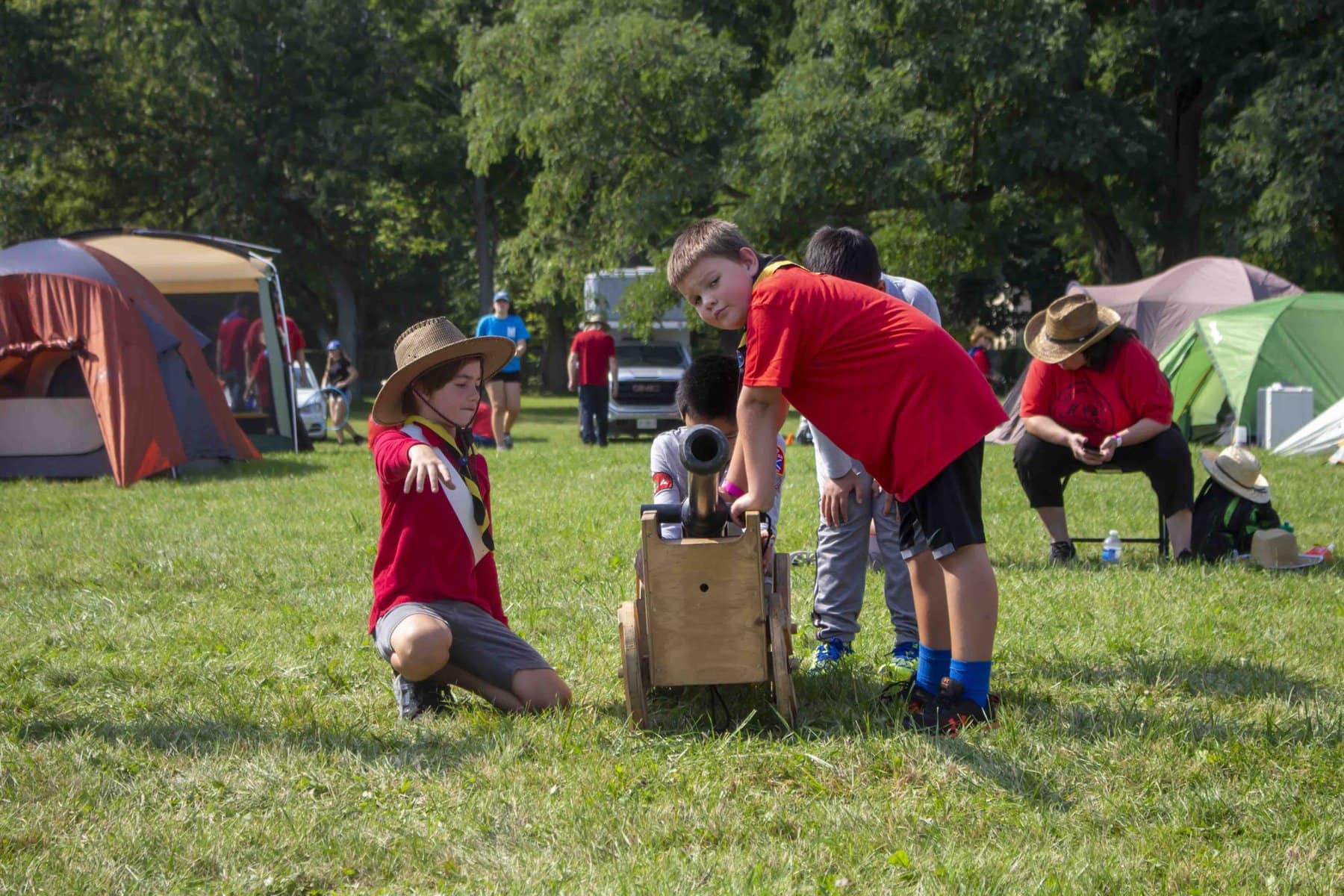 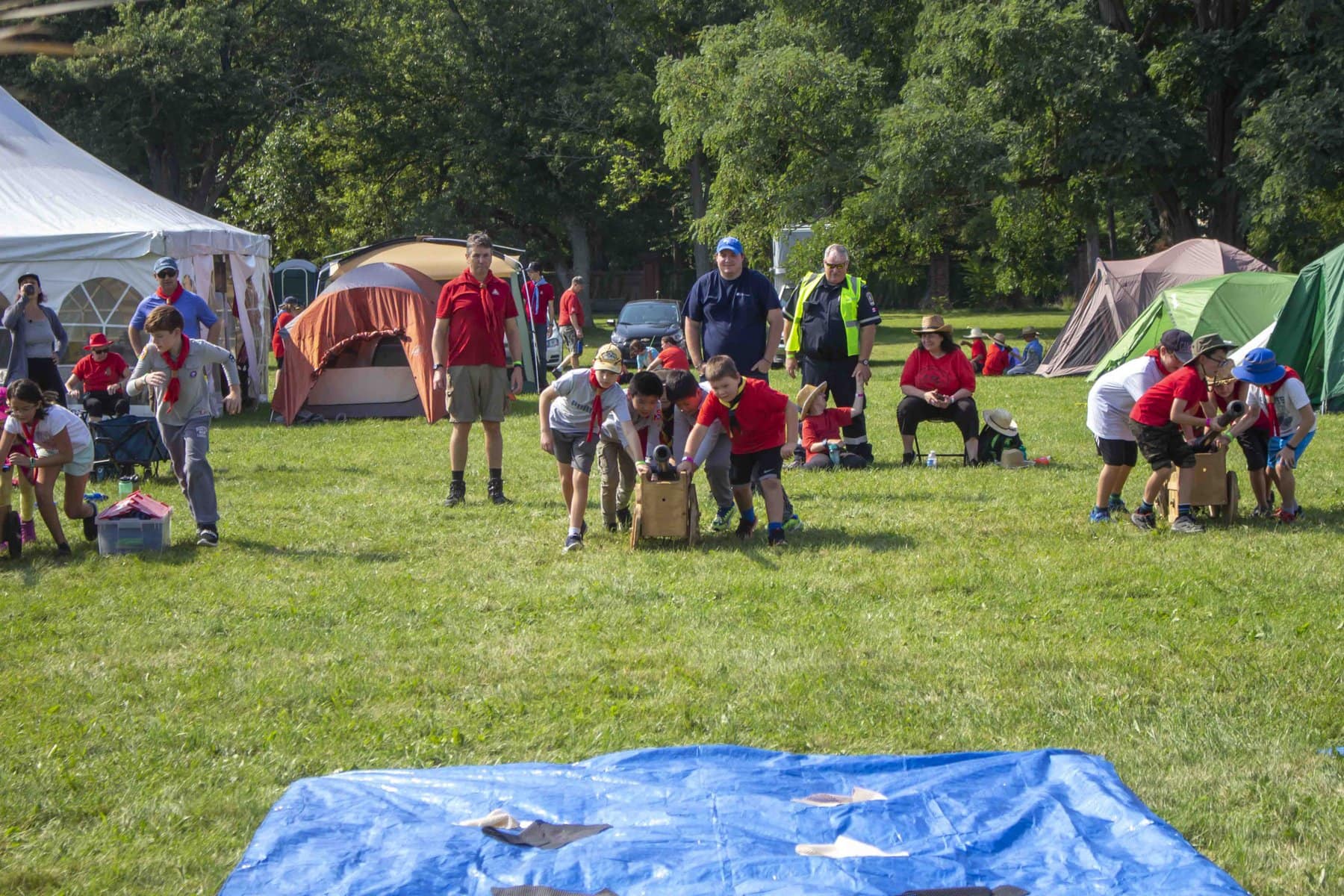 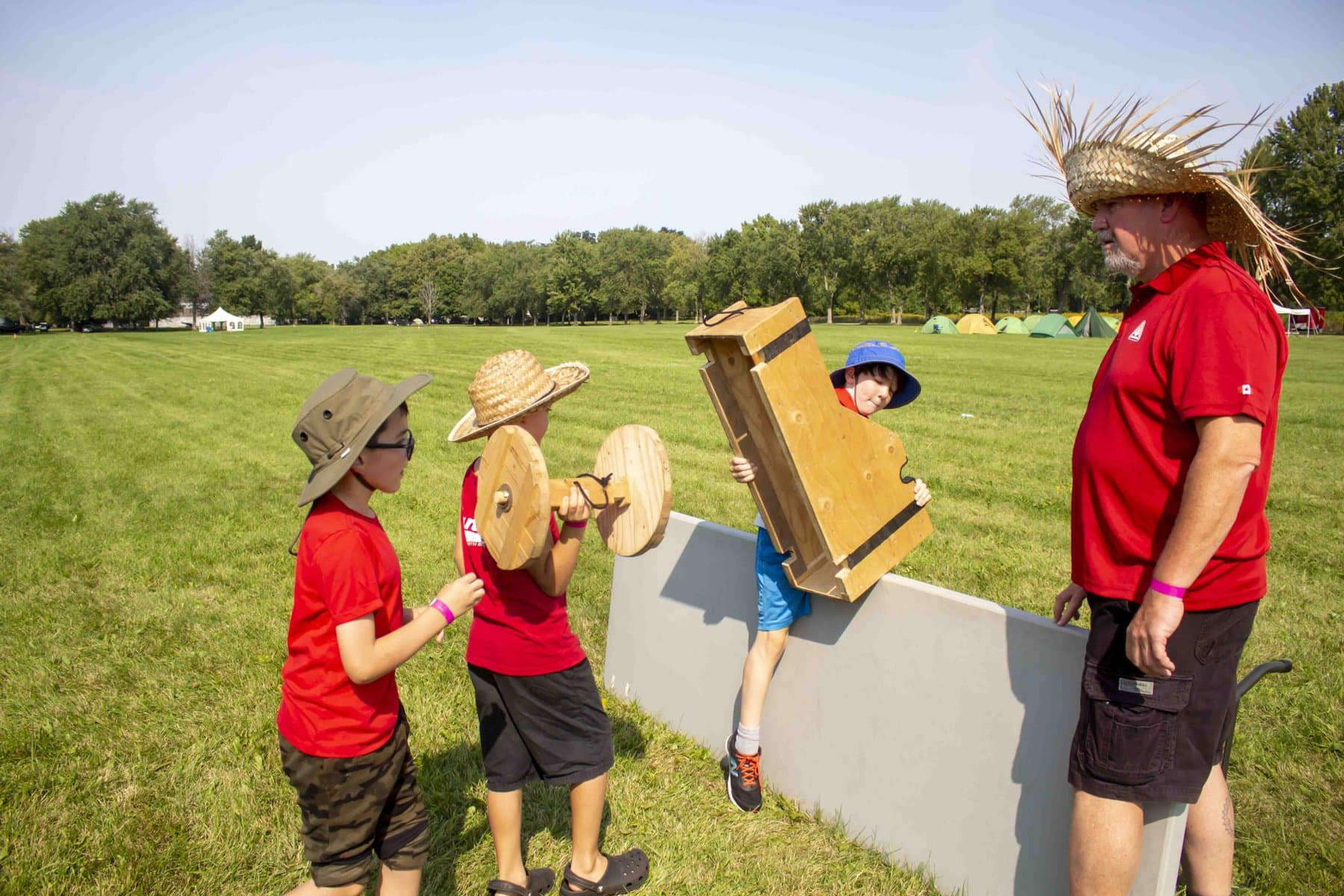 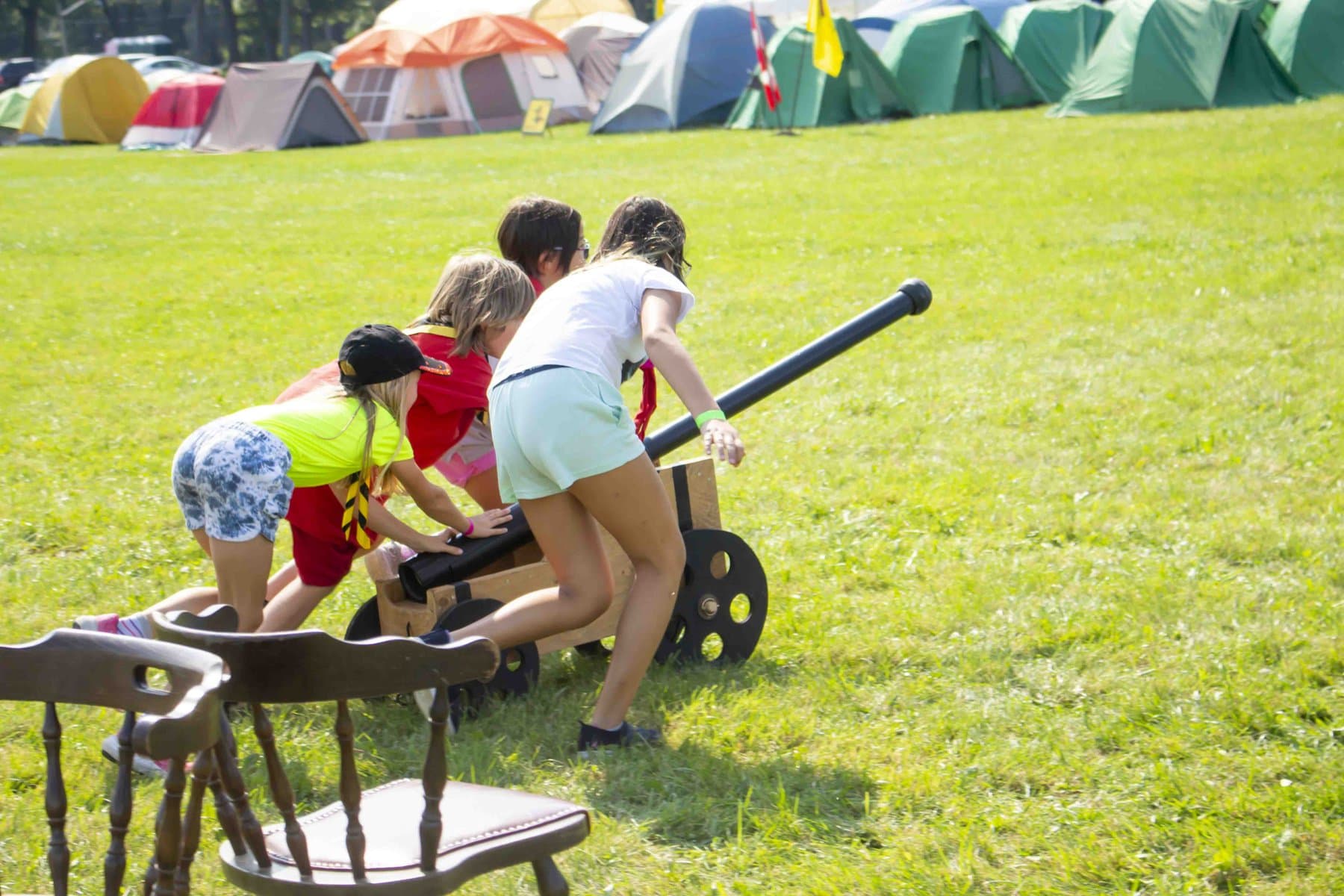 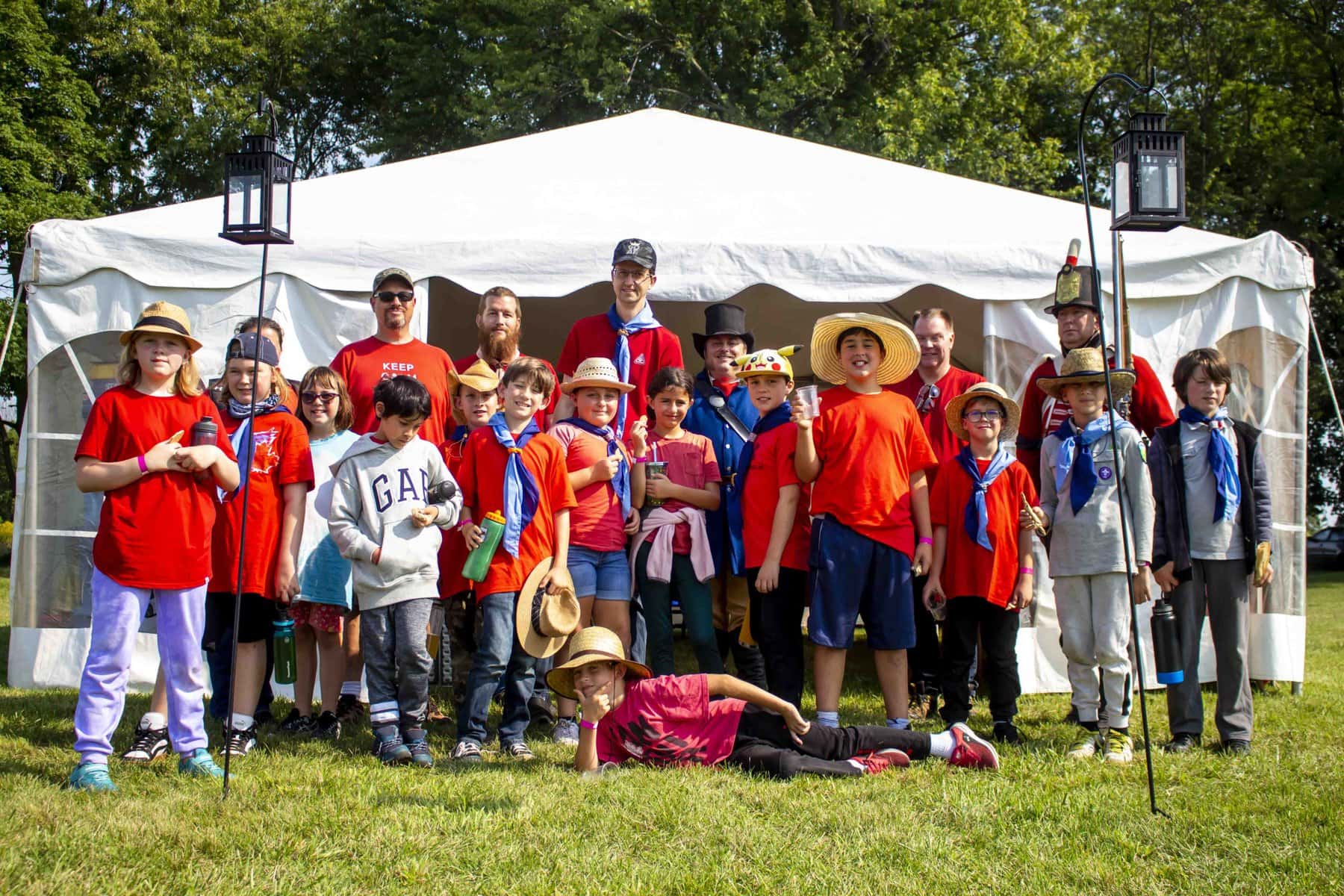 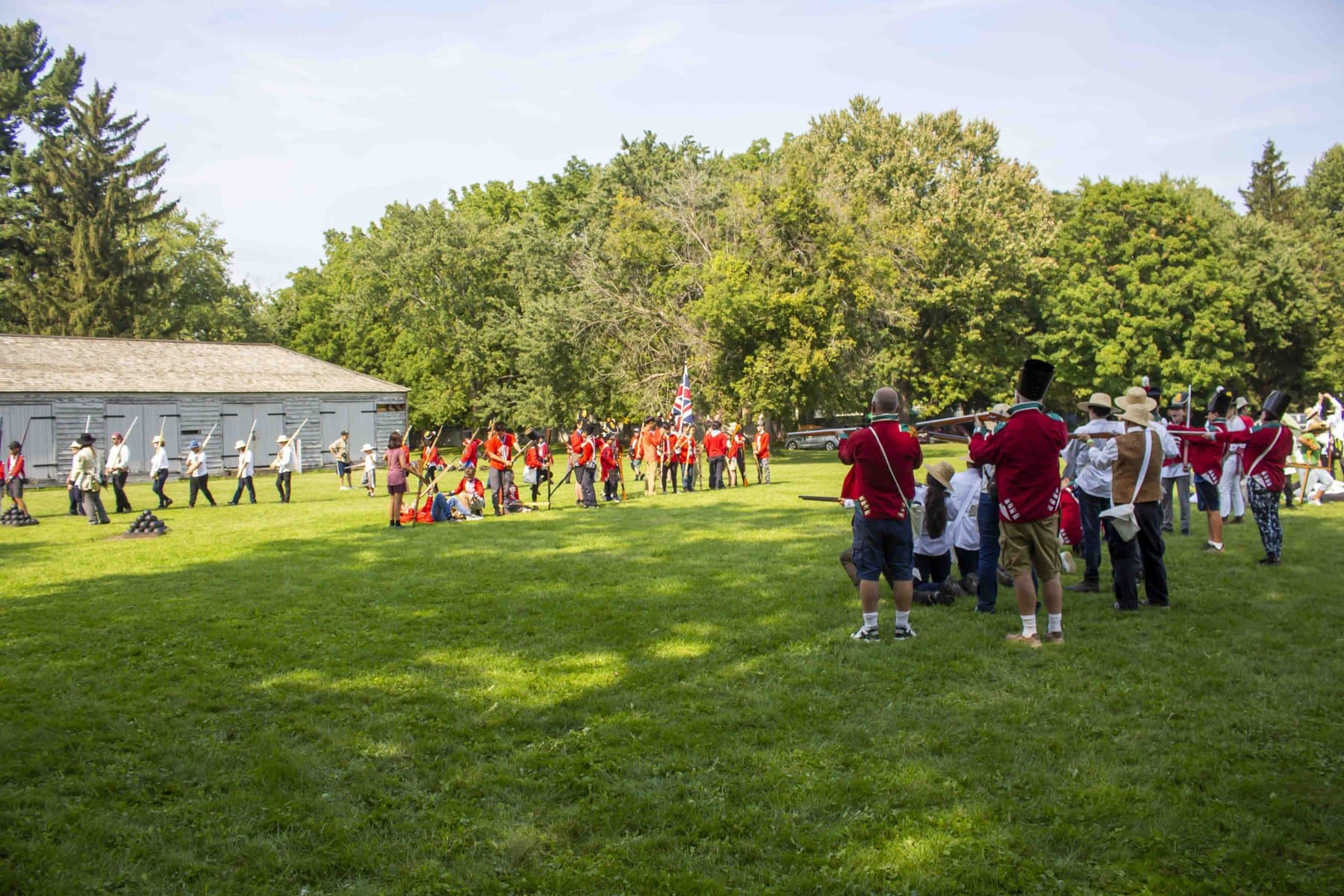 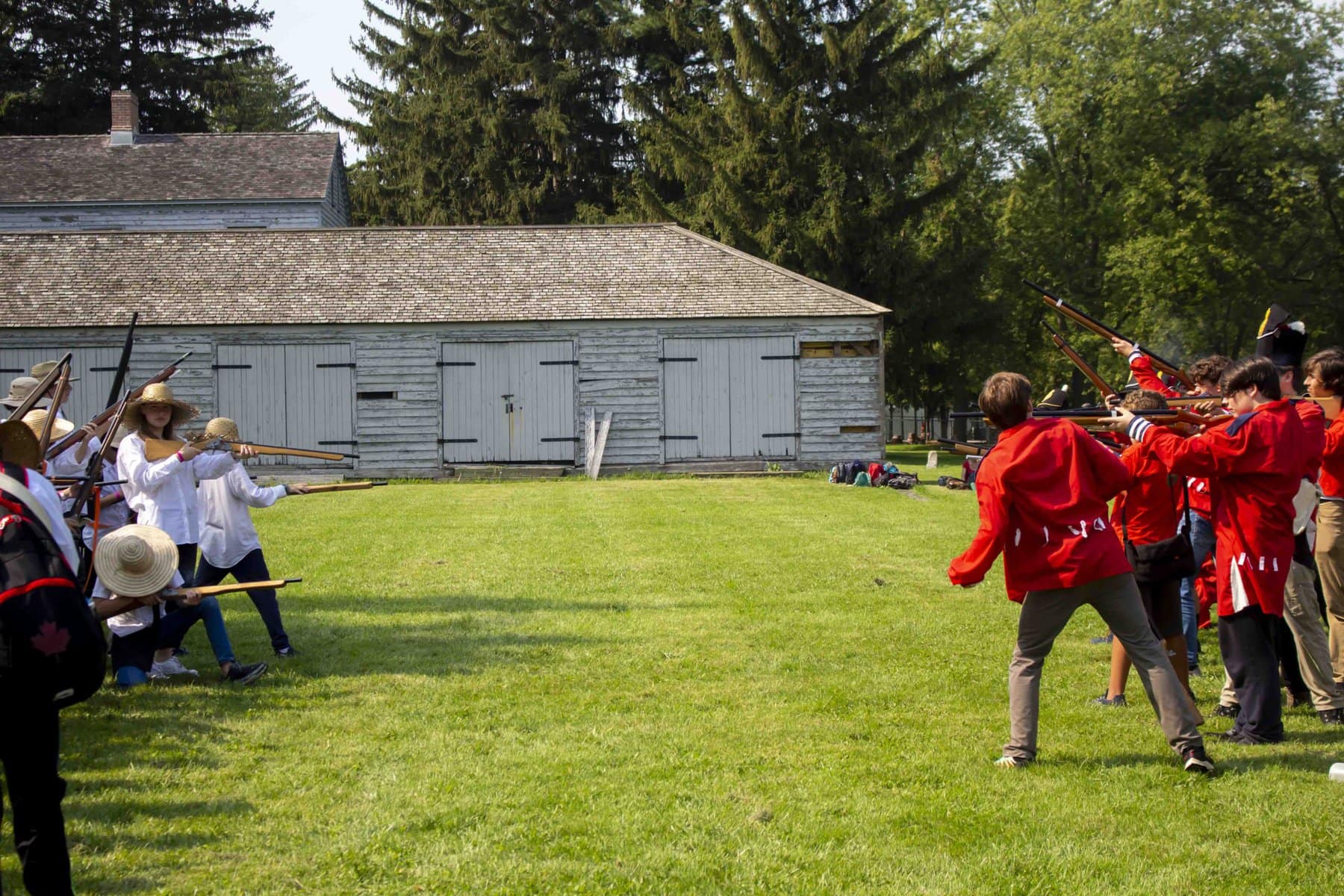 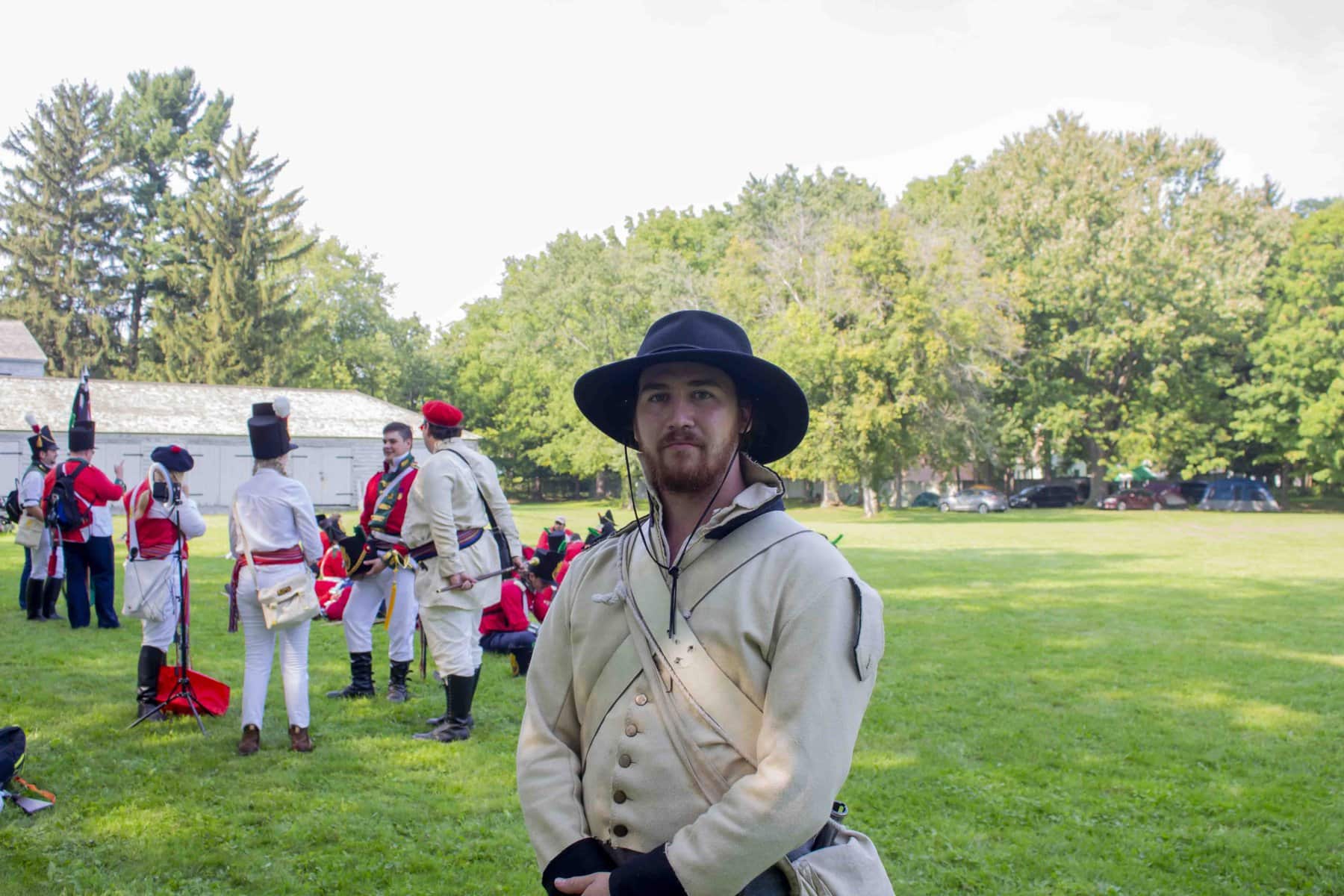 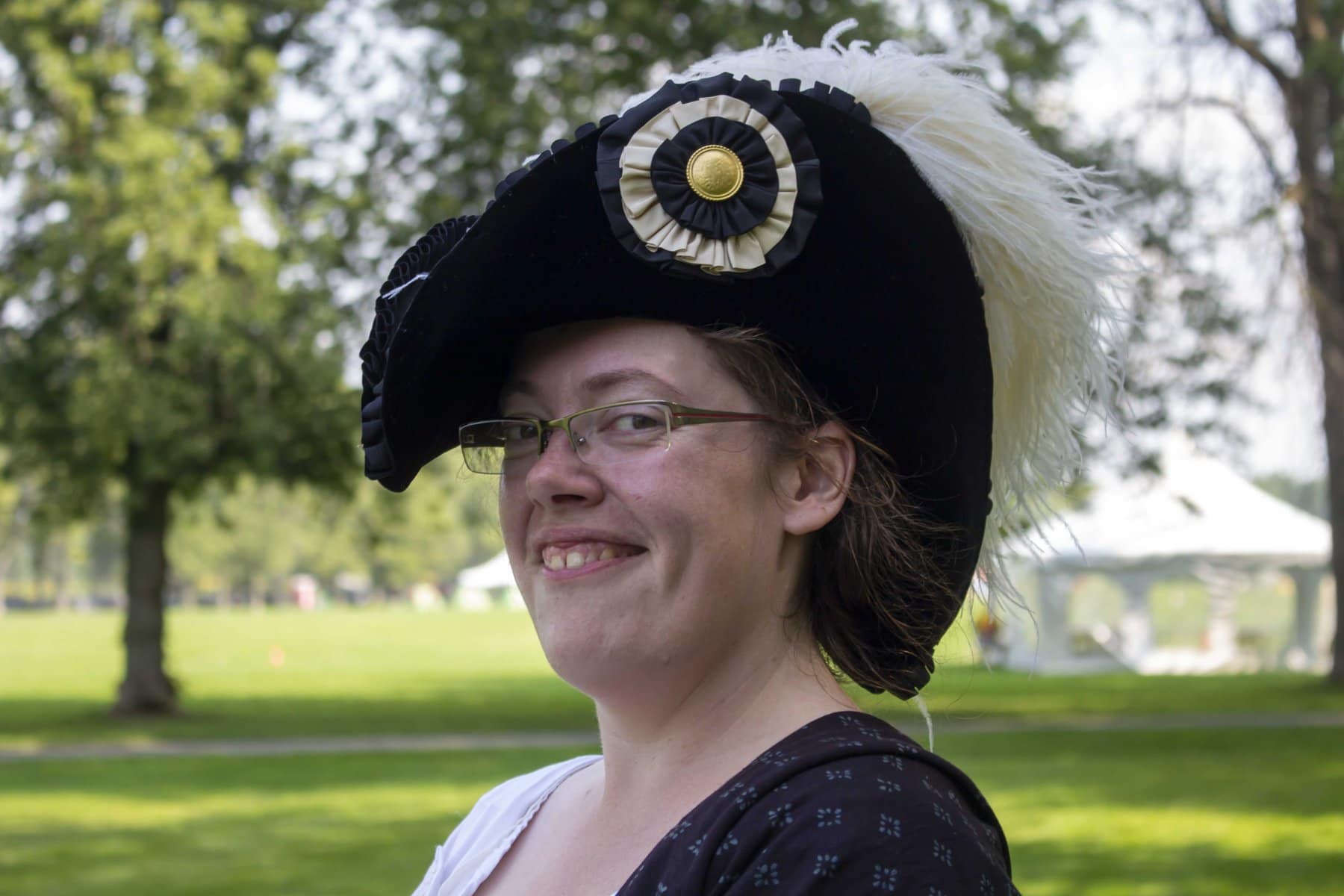 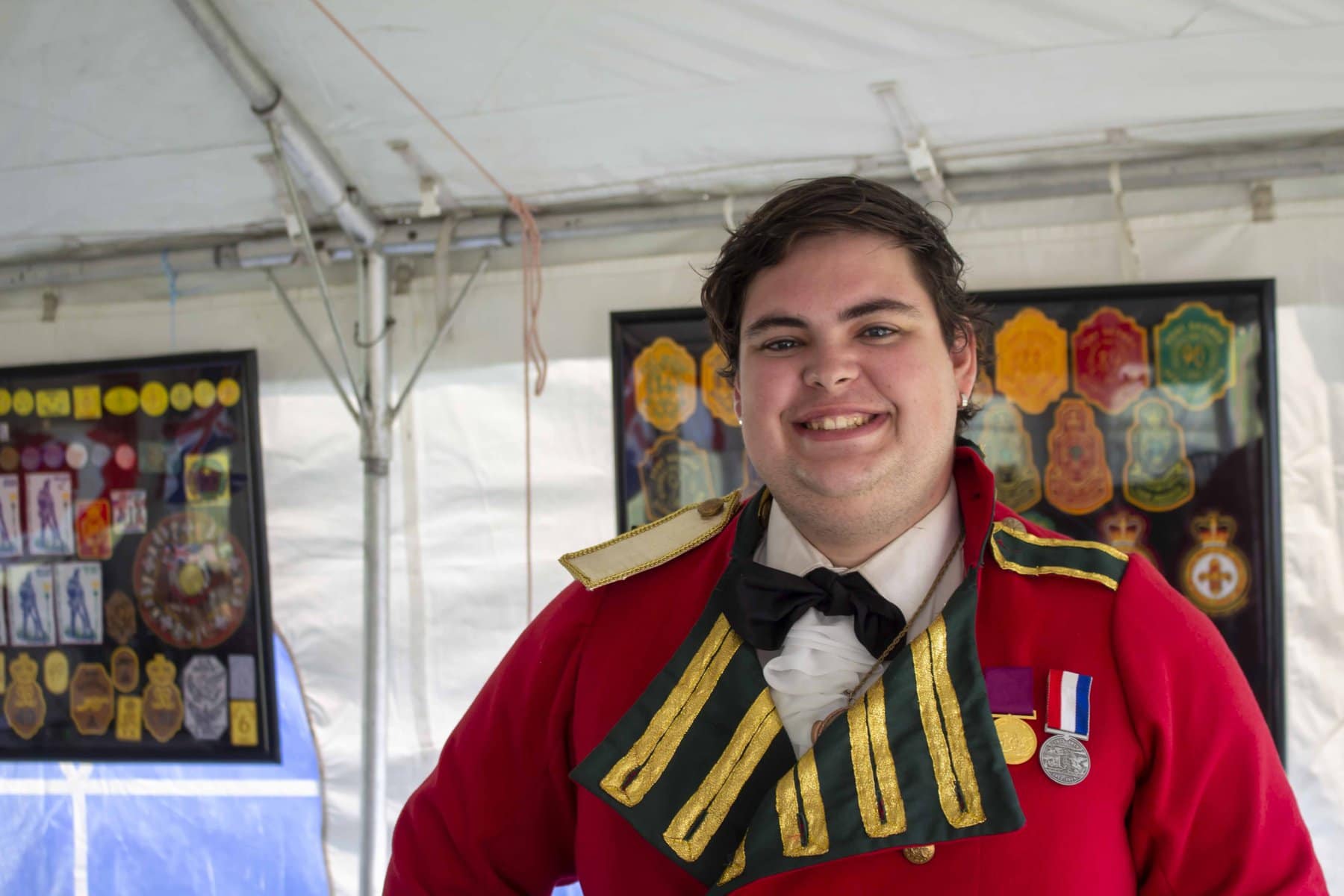 The Scouts Brigade was back in Niagara-on-the-Lake this past weekend for its 39th annual campaign at Fort George.

The three-day gathering is a historically themed camp run by Scouts Canada and hosted by Fort George.

This year, it brought together over 600 scouts and volunteers from all across Canada, as far away as British Columbia.

The campers got to participate in playful battle re-enactments and marches while also learning about the unique history of the War of 1812.

“We’ve had up to 3,000 (scouts) camp here on the site,” said former camp chief and field marshal Patricia Baker.

Previous campaigns have included scouts from the United States, but due to travelling restrictions, only Canadian scouts were on hand this year.

Still, 600 participants is greater than what the volunteers were expecting for this year’s campaign.

“We thought we would get 450,” said camp chief Dizzy Castle.

Instead they got about 550 campers and another 100 volunteers.

The camp is run entirely by volunteers, who commit about four hours a week to the program.

“We make our own uniforms. We build all the muskets from scratch. It’s a lot of time commitment,” she said.

Castle estimates that it took her 50 hours to make her white dress and another 170 to make her red officer’s coat.

On Saturday morning a few groups of Cubs (scouts aged eight to 10) from Aurora Bracebridge and Scarborough were competing in a cannon run.

They had to break down and carry a mock cannon over rocks, rivers and other obstacles.

Other Cubs were off learning about the lives of soldiers and first aid, and the older scouts were at Fort George watching real musket demonstrations.

After lunch, the scouts came back from their tour of Fort George and experienced a fun battle re-enactment on the fields of the Commons.

It was pure chaos, as higher-ranking officers barked orders at their troops, instructing them to load and fire their cap-gun muskets.

Christopher Rowan, a Rover (a scout aged 18 to 26) and camp volunteer from Guelph, was there to help lead and organize the event

“I love the act of mentoring. And I love teaching. And this camp is just one of the most beautiful things for that,” Rowan said.

He was concerned interest in scouting was declining in Canada since the start of COVID-19.

“A lot of groups, my group included back home actually, have folded because we don’t have any leaders any more,” he said.

But Rowan keeps coming back. He said he is endlessly impressed “seeing the youth step up” to assume positions of leadership.

Scouts Canada places a lot of emphasis on youth leadership.

Many of the volunteers at the camp rose to positions of leadership by participating in the program and rising up through the ranks.

One such youth is Matt Dunn, a camp lieutenant and Rover from Bolton, Ont., who has been coming for 11 years.

“There isn’t a single other camp that is anything like this,” Dunn said.

For Dunn the Scout Brigade is an opportunity for him to mentor youth and perform in costume.

He recalled the first time he led a shooting drill.

He’d been going to camp for three years, he had risen to the rank of sergeant and he was put in a position of authority.

“Something about running them through the firing sequence for the very first time. I felt like I had accomplished something incredible,” he said.

Sinking of The Foam, part 4: Almost 150 years on, the Foam is still part of RCYC sailing lore

NOTL, region express thanks to nurses and long-term care workers