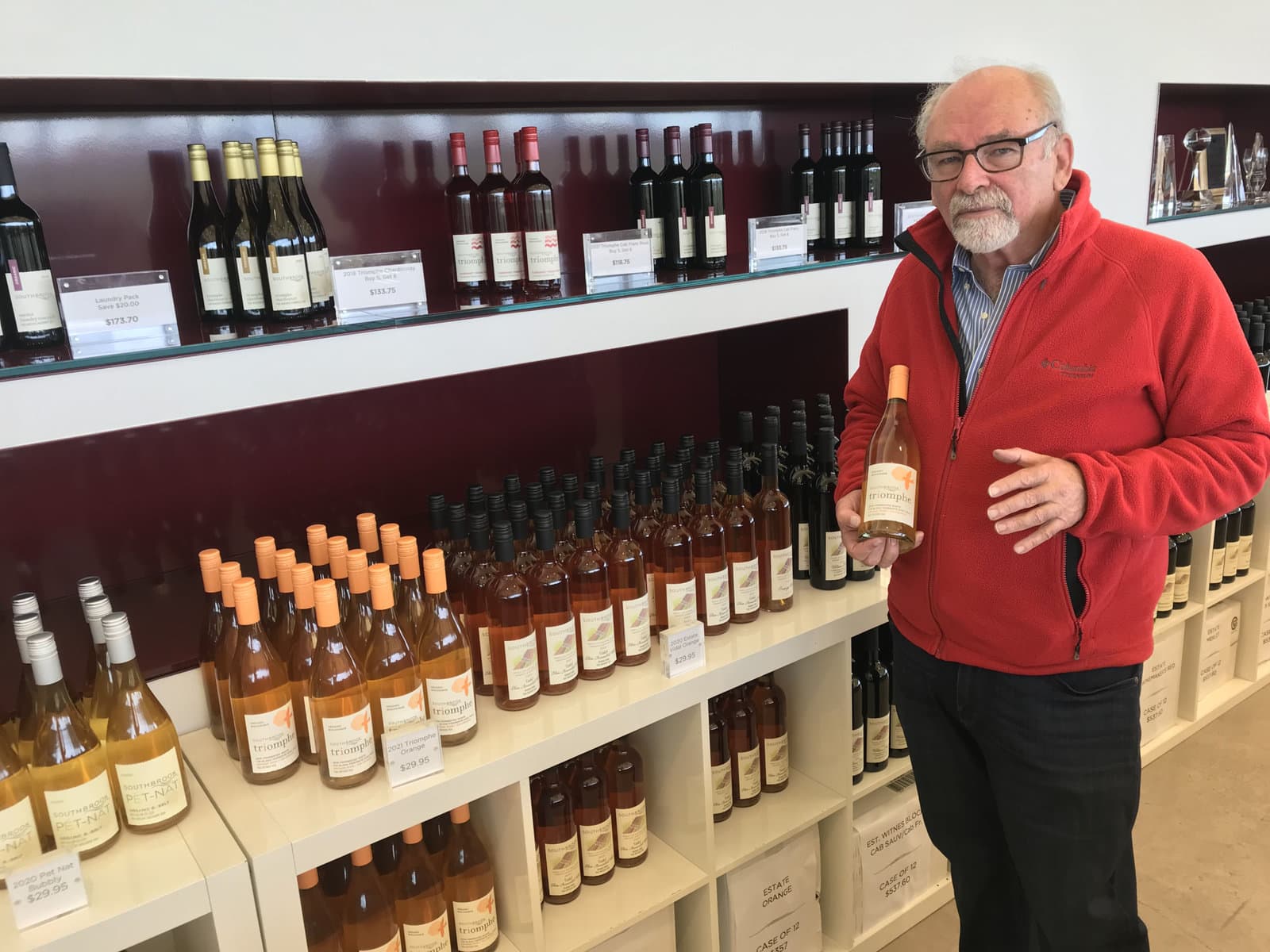 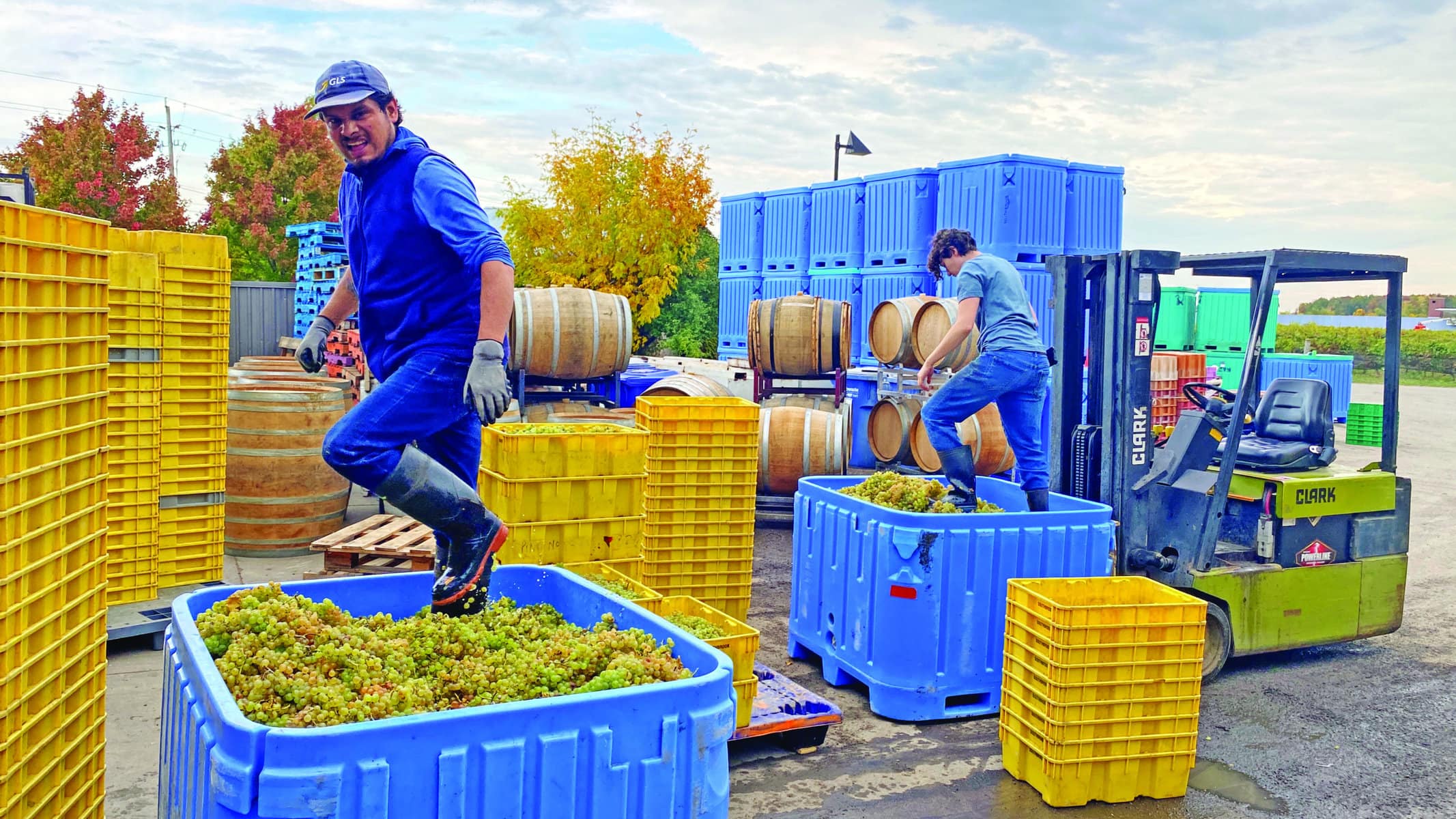 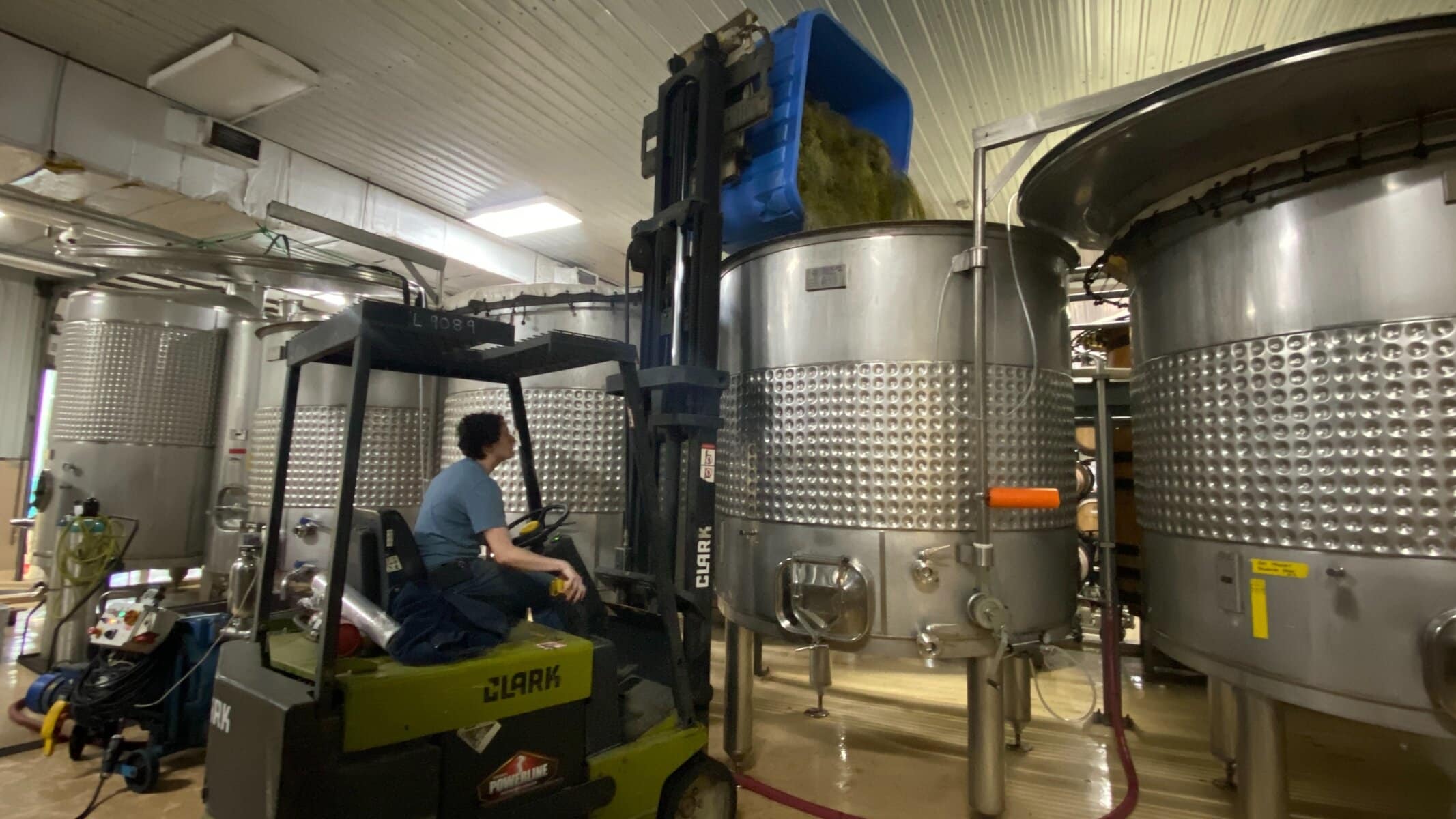 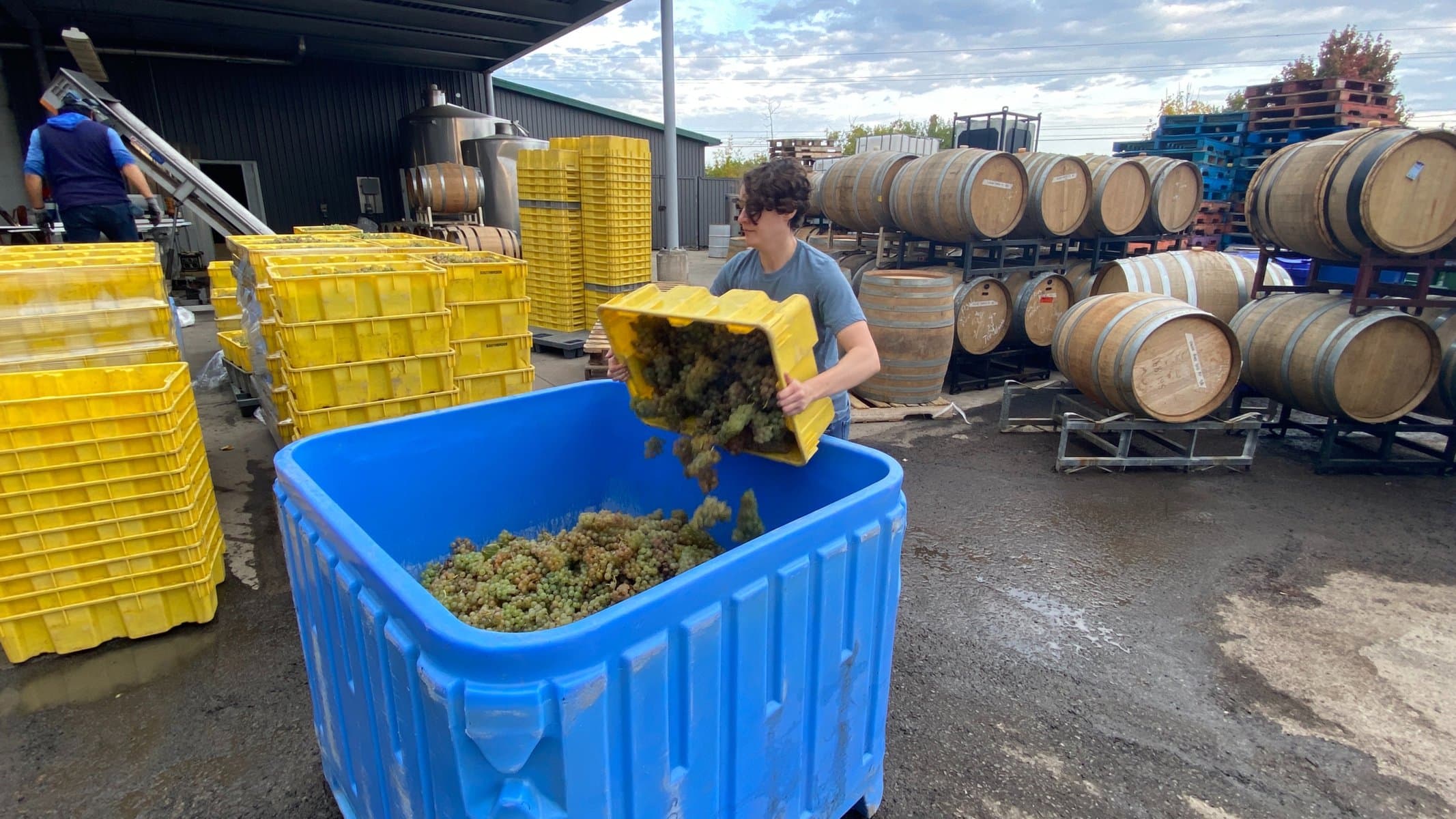 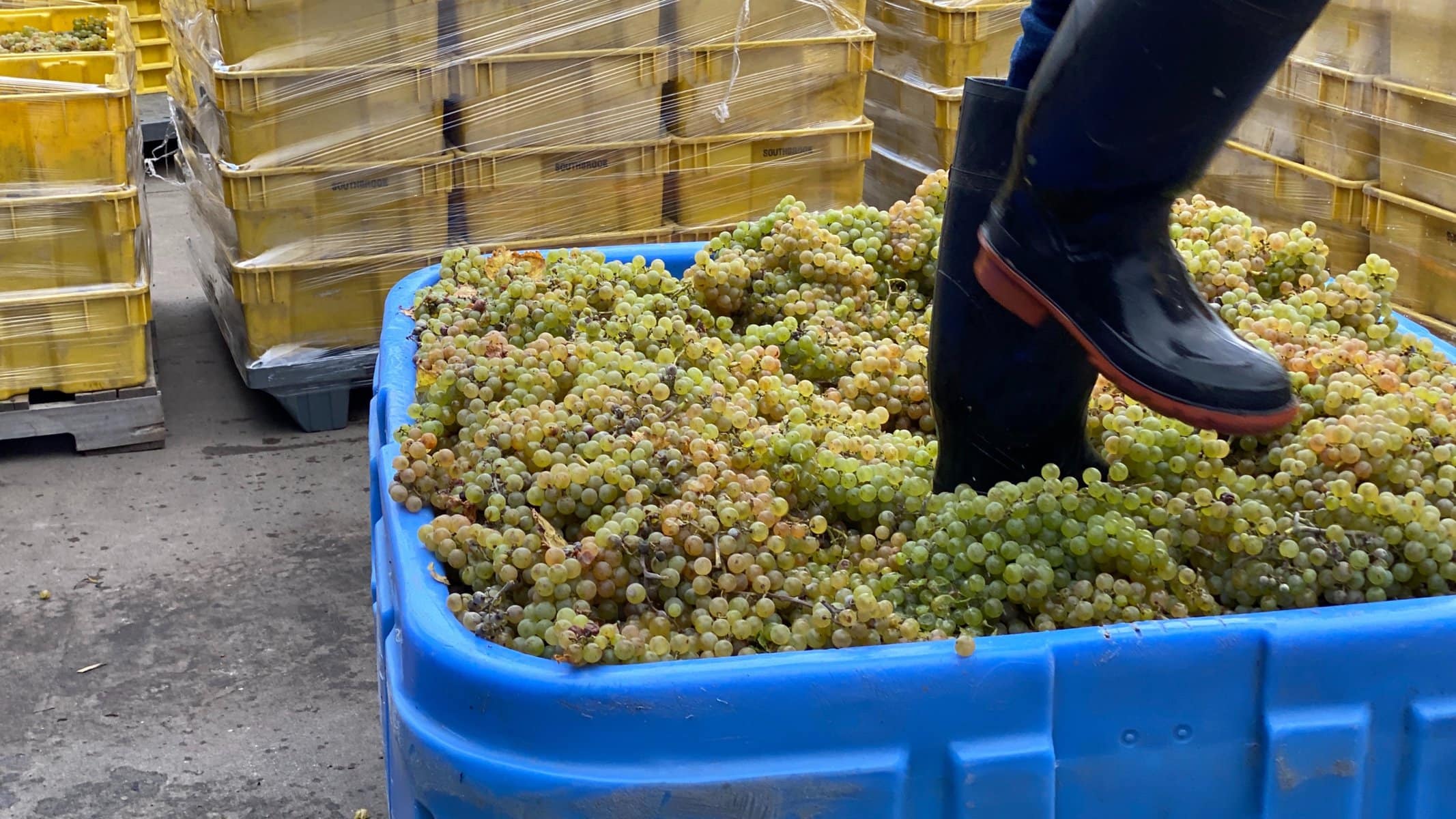 Everything old is new again when it comes to producing one of the most popular white wines at Southbrook Organic Vineyards.

The wine industry in Niagara is high-tech in many ways, but come harvest time at Southbrook, you’ll find cellar master Emily Lacey and farm worker Jorge Fragosa literally stepping back in time.

Once the handpicked Vidal grapes come in from the vineyard, Lacey and Fragosa dump the yellow picking boxes into big blue quarter-ton totes, don their rubber boots and clamber in.

Not for the fun of it, because it’s hard on the legs by all accounts. They stomp the grapes as part of the time-honoured process of making skin-fermented white wine.

Today, it’s known as orange wine. “Orange wine is new, but it is made in the oldest way,” explains Southbrook proprietor Bill Redelmeier.

After the grapes are stomped, to squeeze out just enough juice to allow fermentation to start, the grapes are dumped into enormous, seven-ton open tank fermenters, made of either neutral oak or stainless steel.

Spontaneous fermentation begins with just the wild yeast already present in the air and on the grapes.

No sulphites or preservatives are used and it’s bottled cloudy and unfiltered, so there is some sediment left in the finished wine.

“In 2012, we started experimenting with small batches of orange wine,” Redelmeier said.

Orange wine was unknown in Ontario when Southbrook became the first winery in the province to make it 10 years ago. Redelmeier had to travel to find others to learn from.

“My eyes were opened when I went to the Raw Wine Fair in London in 2015. It was all organic wine, made with natural skin contact,” he said.

There were 400 to 500 different wines, “so that helped give a sense of direction. In Ontario there were so few, it was hard to know what we were aiming for,” he added.

When the Niagara-on-the-Lake winery first launched its orange wine, “new VQA (Vintners Quality Alliance) regulations had to be written, to codify skin-fermented white wines. At the time, white wine had to be clear, with no sediment and classic flavours,” said Redelmeier.

“Those regulations were the first written for skin-fermented white wine in the world,” explained Redelmeier with pride.

For those unfamiliar with orange wine, he describes the flavour characteristics as “confusingly orange, citric, some tangerine or seville, tastes of Earl Grey tea, and it can be funky.”

“It’s a wonderful wine. Open it with half a dozen friends and try it together, slightly chilled.”

One of his favourite experiences pairing orange wine with food was at “a Spanish restaurant in Toronto, with foods that had lots of bright flavours, but they weren’t overpowering, or dominating, and the orange wine just fit in with everything.”

According to Redelmeier, “one-third of Southbrook’s customers come from Quebec and many of them are fans of our orange wine, having discovered it through the SAQ (the provincial liquor retailer in Quebec).”

Southbrook is so popular among Quebecois, “we were number 1 on Google last summer, in French,” exclaimed Redelmeier.

Orange wine is still unusual, but no longer rare. “It’s becoming more common now and people are jumping the bandwagon,” he said.

“Niagara is a hotbed for orange wine now,” he noted.

The Wine Marketing Association of Ontario reports the production of orange wine has grown significantly since the VQA regulations were adopted in 2017.

As of last year, 22 wineries in Ontario were producing 30 different orange wines.

It’s an important part of Southbrook’s wine portfolio, so expect to see staff there pulling on rubber boots and stomping the grapes the old-fashioned way when harvest time rolls around again and the yellow picking boxes come in from the vineyard.

History in the Vineyard cooks up another gourmet take-out dinner