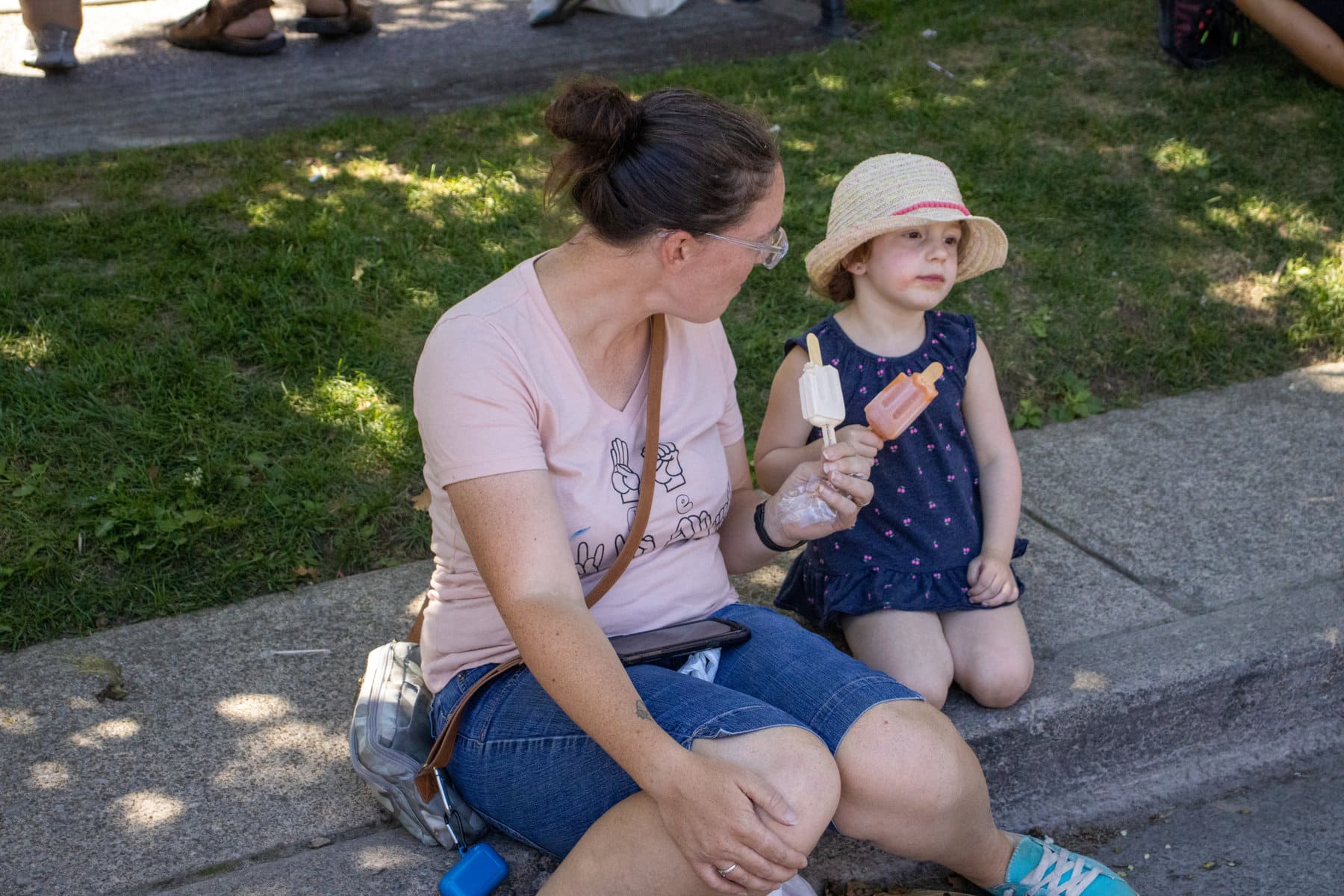 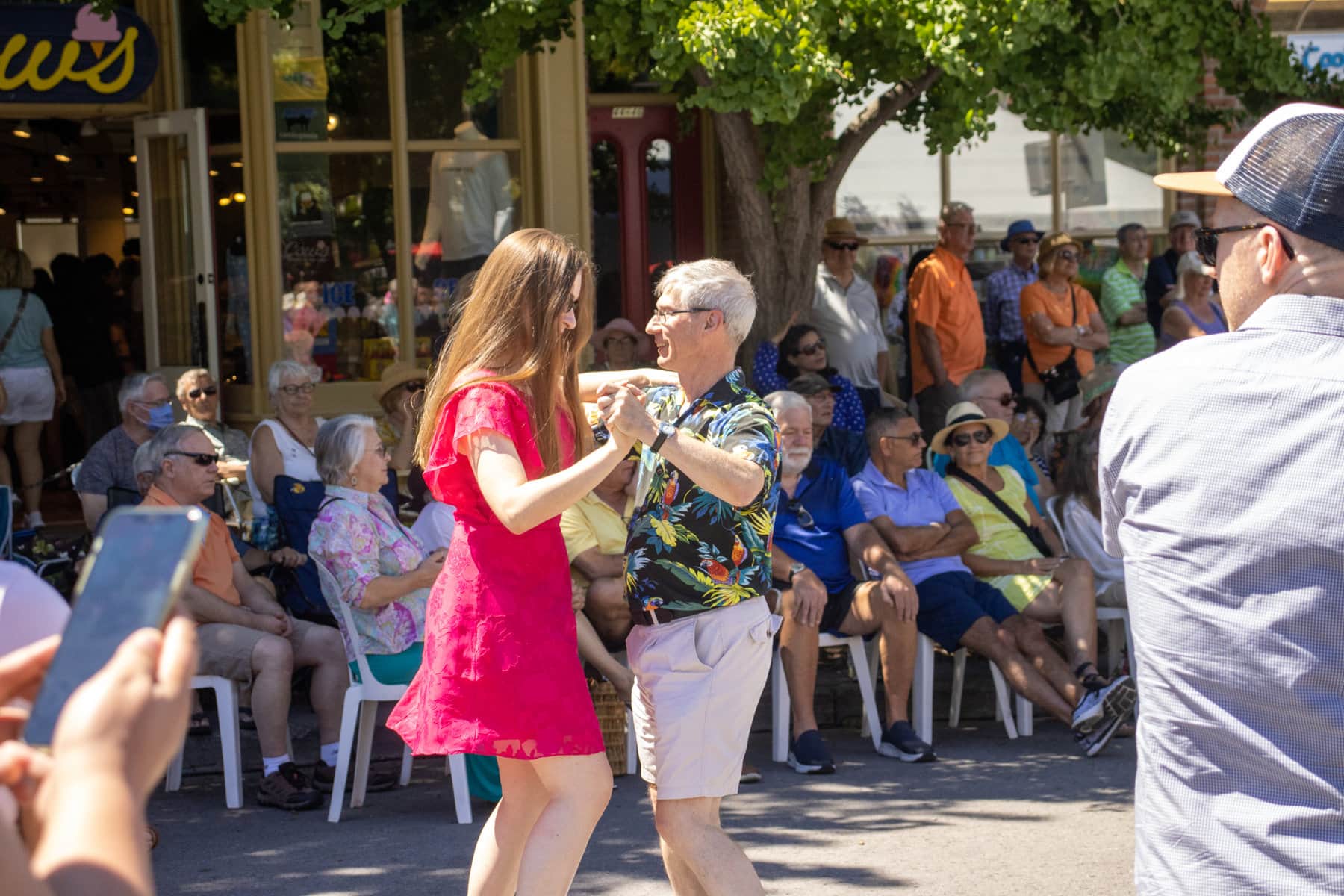 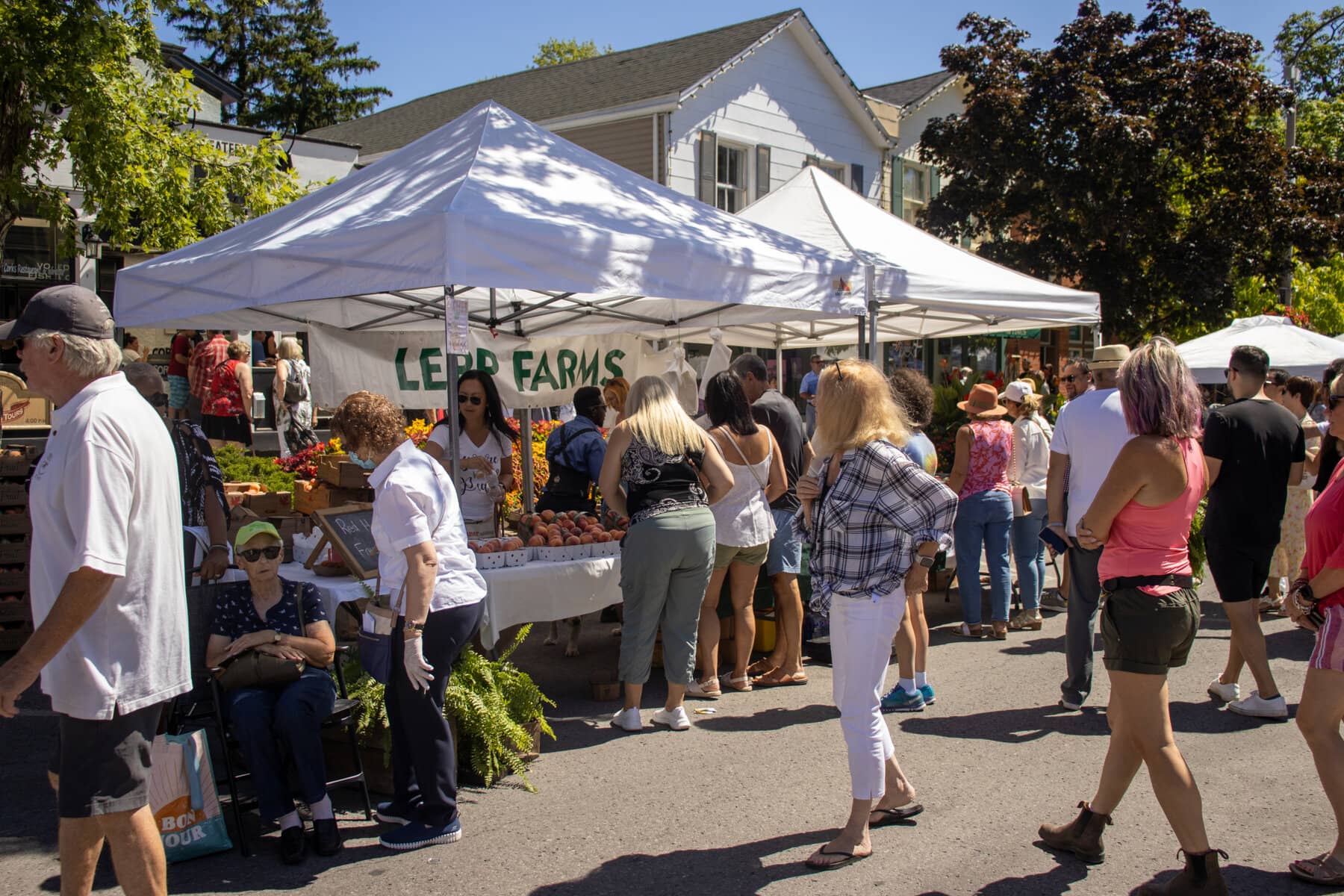 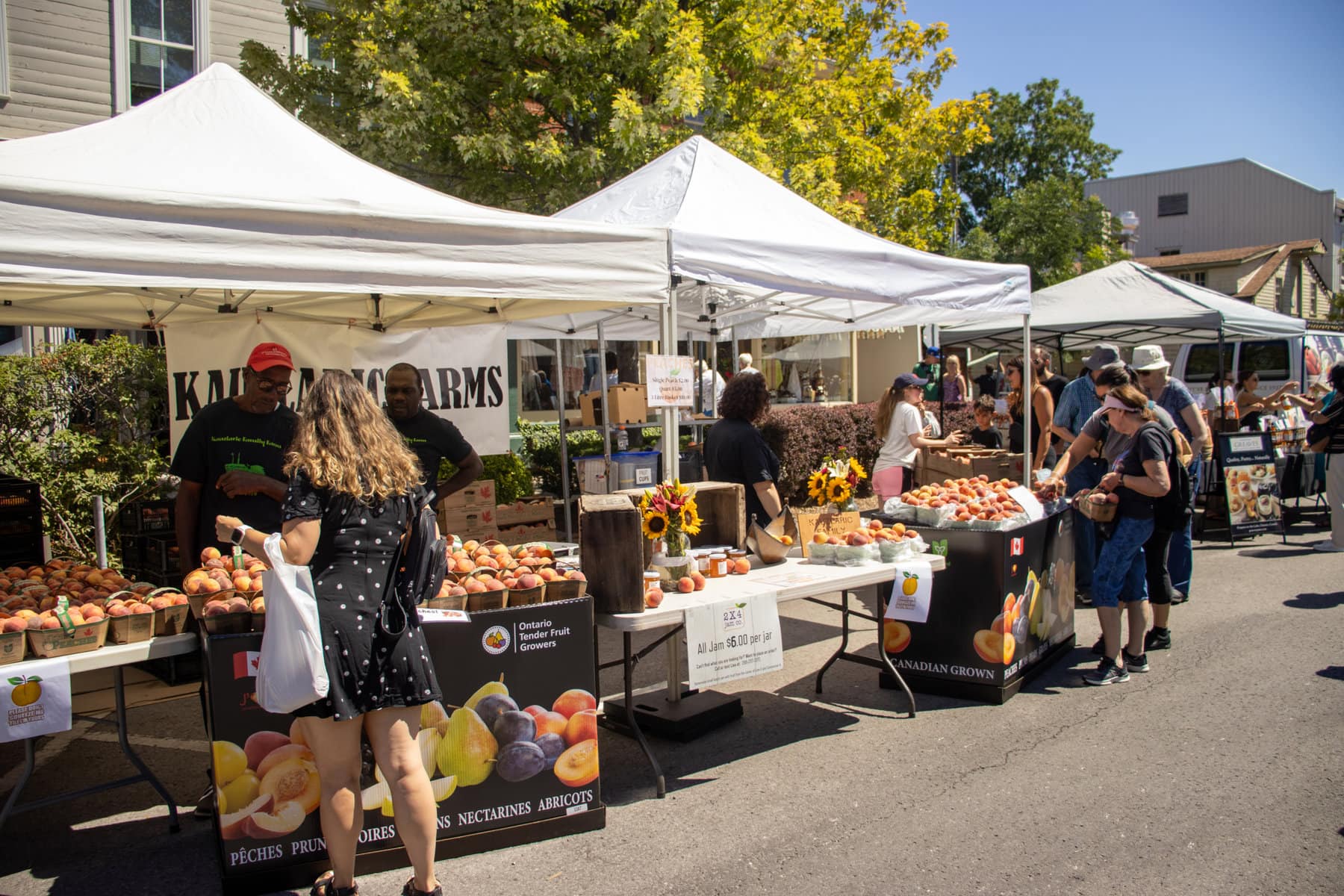 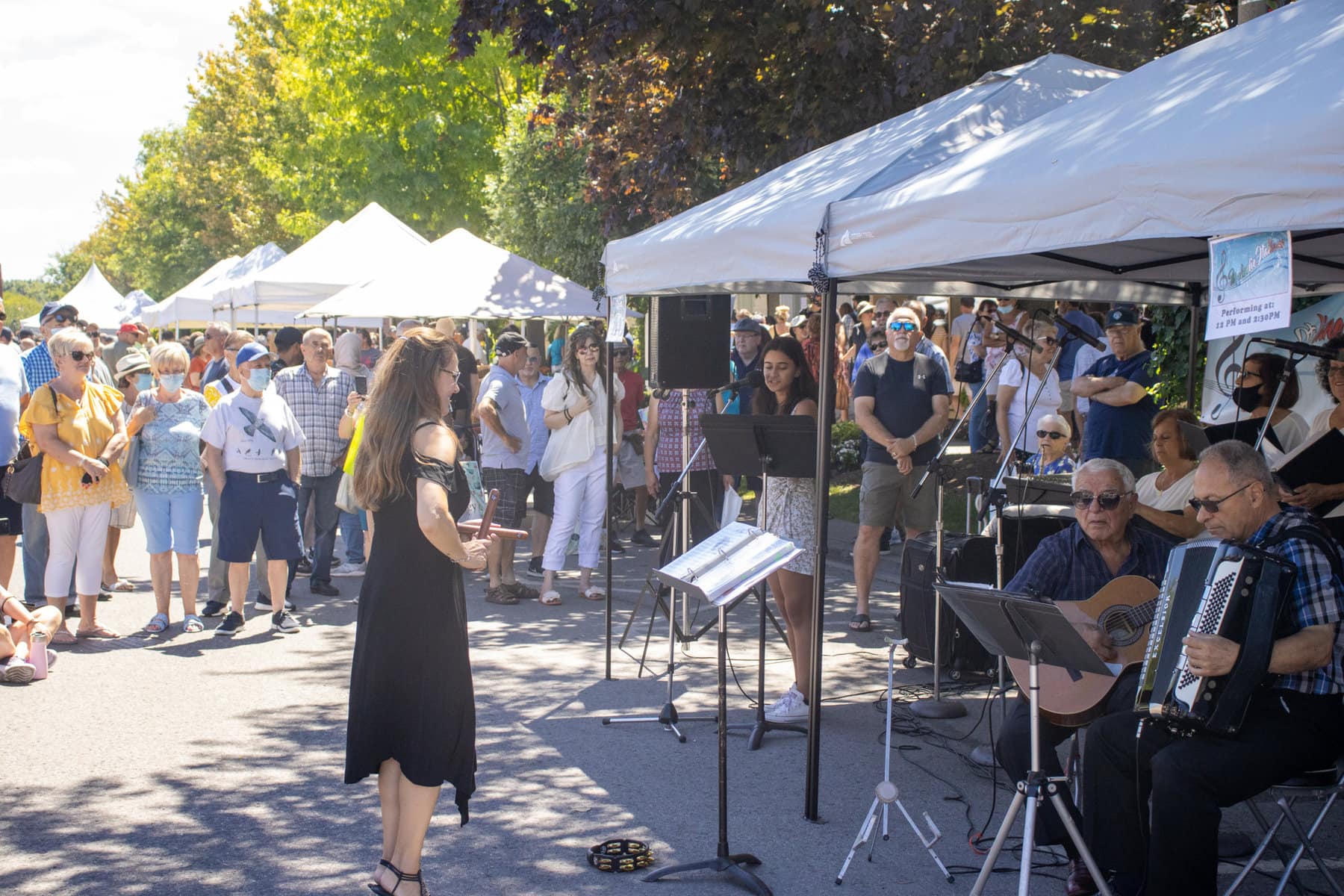 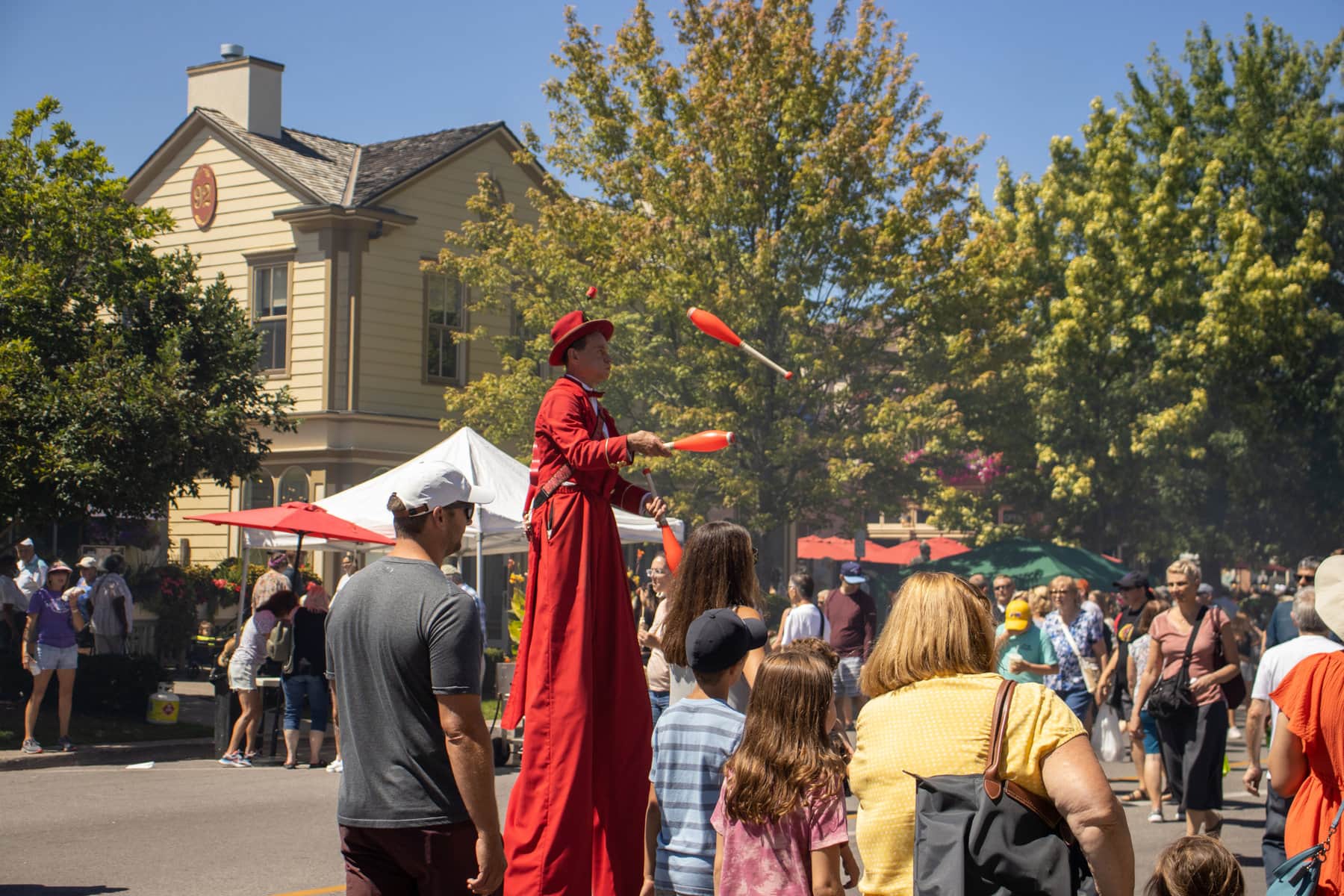 Everything was just peachy over the weekend at the annual Peach Celebration on Queen Street.

Teresa Cole and her daughter Cherrie, 4, sat on the curb in the shade Saturday eating their Popsicles while they enjoyed the hustle and bustle of the festival.

“It’s just as busy (as other years), if not busier,” Cole said with a laugh.

Originally from NOTL, but now living in St. Catharines, she’s  been to NOTL’s peach fest on many occasions, but it was her daughter’s first time.

As Cherrie licked her Popsicle and watched the crowds walk by, she said she was having lots of fun.

The NOTL Chamber of Commerce organized the annual Peach Celebration after a two-year hiatus due to the COVID-19 pandemic.

Part of Queen Street was closed off for the festivities, which was jam-packed with people of all ages.

About 60 vendors and merchants were on hand,  the Chamber’s the director of marketing and events, Nicole Cripps, said in an email.

On one end of Queen Street people danced to the beats of the Tropical Steel Drum Band, while at the other end people listened to a performance by the group Melodie Italiane.

And, in between, the Toronto All-Star Big Band had people dancing in the street.

As the music played, visitors waited patiently in front of booths for Lepp Farms and Kauzlaric Farms to get some delicious NOTL fruit.

Kauzlaric Farms has been a fixture at the festival for a decade. The last two years the family has been selling produce from their farm stands, but they’re happy to be back at the festival.

“(It’s a) good way to share our farm with the community,” said Michael Kauzlaric.

The operation on Concession 4 Road moved into town in 1978 and has been operating for 44 years.

“It’s been really good to participate in this and let people eat some fresh local fruit,” he said.

The annual Peach Celebration traditionally attracts huge throngs to downtown NOTL,  but Kauzlaric was a little uncertain at first, not knowing if the crowds would return.

No fear: Johnson and Queen streets, and other nearby roads, were bumper to bumper with hundreds of parked cars all day Saturday.

As the sun beat down on the crowd, many people beat the heat by eating ice cream in the shade or enjoying a fresh corn on the cob.

However, food wasn’t the only thing available. Vendors selling clothing, food and custom-made items were there, too.

Wellspring Niagara had a booth selling many handmade items, with all the proceeds going back to the agency.

The non-profit organization offers supportive cancer care to the community, including many programs and services for patients at no cost.

Sue Bernier has been with Wellspring Niagara since 2000 and said this was their second time at the festival. She was there selling her Necklaces of Hope.

There were smiles all around as people enjoyed the balmy weather, music and Niagara peaches.

Kids laughed as towering stilt walker Paul Babiak walked around in a red suit and oversized shoes, stopping every so often to demonstrate his juggling skills.

The Peach Celebration “brings together locals and visitors alike to spend the day not only enjoying our beautiful town and all that it has to offer but also celebrates our agricultural roots with our tender fruit farmers,” said Cripps.

After a two-year break, the festival had a mammoth turn out.

“It’s good to see the town alive like this,” said Mark Lepp from Lepp Farms.

Hummel sues town for $500,000 over development freeze in Old Town

Hirji says no plan yet for fourth vaccine shot, but he’s wary of potential variant-driven surge

St. Davids Porchetta in the Park is Sunday