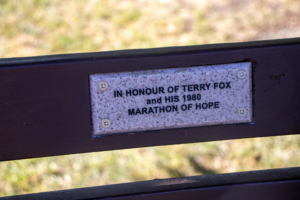 On a July day 42 years ago, Gloria Ghetti brought the inspirational Terry Fox to the quiet town of Niagara-on-the-Lake to be honoured at the Prince of Wales Hotel.

To kickstart the special day, the town unveiled a bench in his name. On the bench is a plaque that reads: “In Honour of Terry Fox and His 1980 Marathon of Hope.”

“My mother, Gloria Ghetti, brought Terry down to Niagara. She picked him up at the Hamilton airport and chartered the plane to bring him down,” said Donna Sattin, who still lives in NOTL.

She described how meaningful it is that her mother had the honour of meeting Fox and how proud she is to see that led to a day to recognize the Canadian hero.

Sattin was invited to the unveiling by Joan King, who has been organizing the NOTL Terry Fox Run for about 16 years.

Due to the pandemic, the town’s annual Terry Fox run has been virtual since 2020, so King wanted to do something special to honour Fox and the day Ghetti brought him to town.

“So I thought, what can we do to keep the spirit alive here now that we haven’t had anything for two years?” said King.

That set in motion plans to have a day dedicated to Fox. So, she contacted Lord Mayor Betty Disero to see if July 12 could be dedicated to him.

“When she called me and said, ‘Well, I’d like to do something to commemorate the visit that Terry made to Niagara-on-the-Lake,’ I just said great. What would you like to do?” said Disero.

She and King went down to Simcoe Park to see if there was a bench they could put a plaque on. Luckily, they found one that happened to be empty.

And, serendipity: The bench is located where runners line up for the Terry Fox Run in September.

“It couldn’t be any more perfect,” said Satin.

Disero said they sent in the request for the plaque to the town on April 15 and it was installed by June 8.

He covered a total of 5,373 kilometres until he had to stop just outside Thunder Bay.

The annual Terry Fox Run in Niagara-on-the-Lake will be back in person this year on Sept. 18.

Who let the dogs out? … Virgil Animal Clinic

PHOTOS: Tourists flock to NOTL in face of pandemic threat