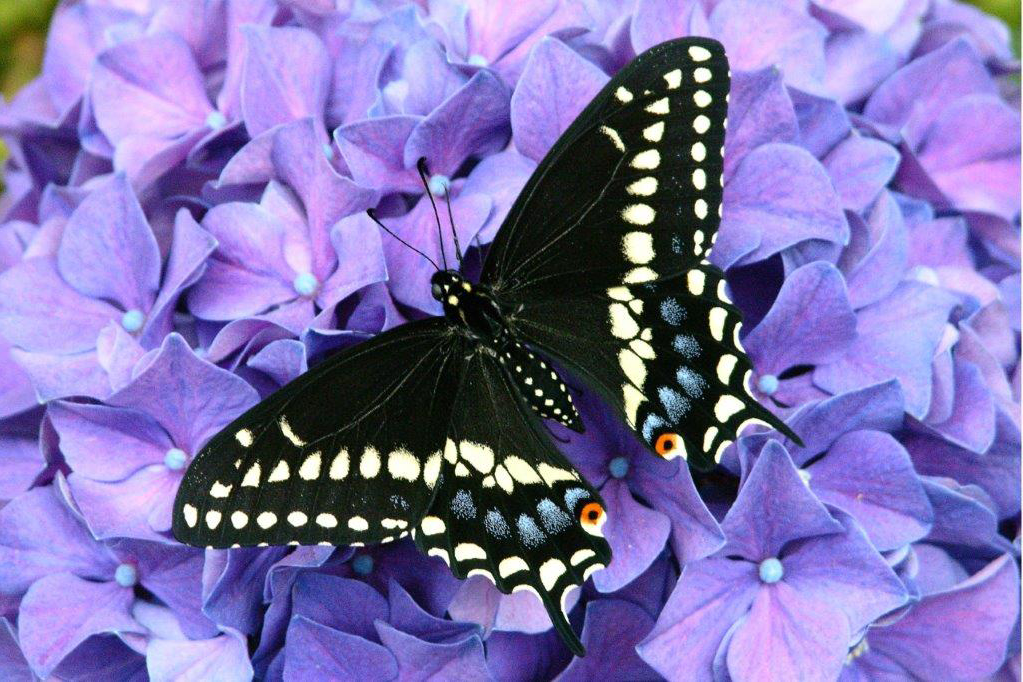 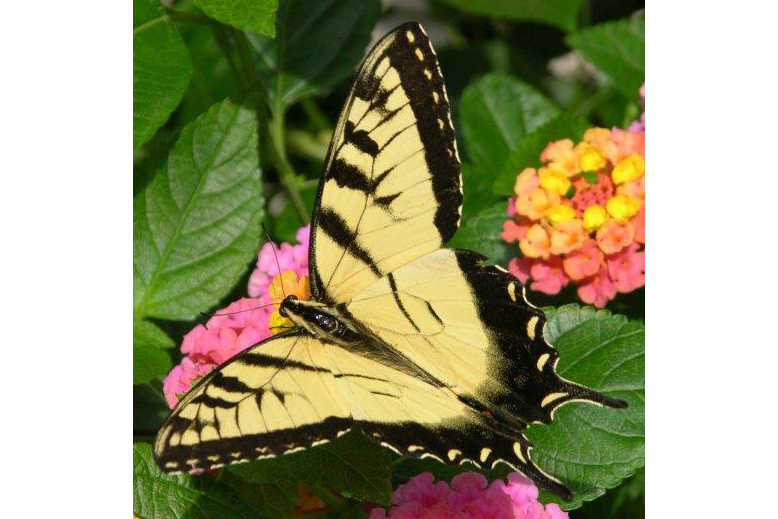 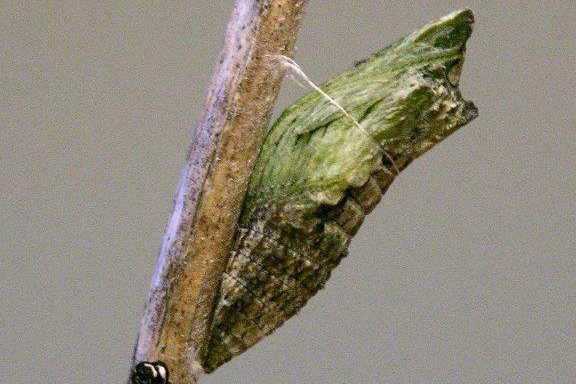 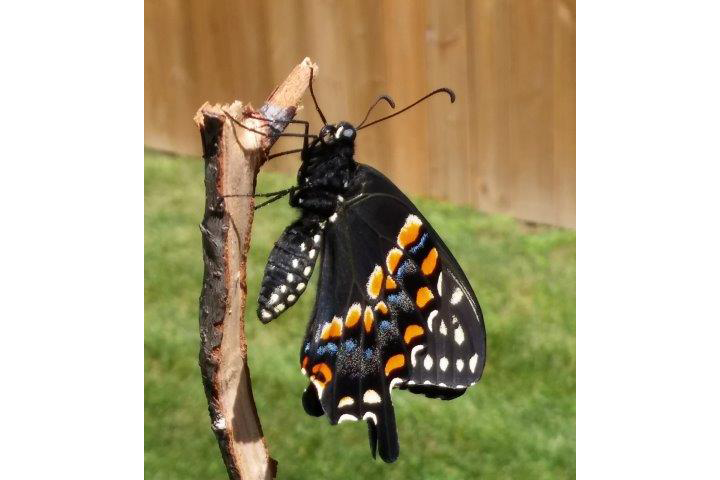 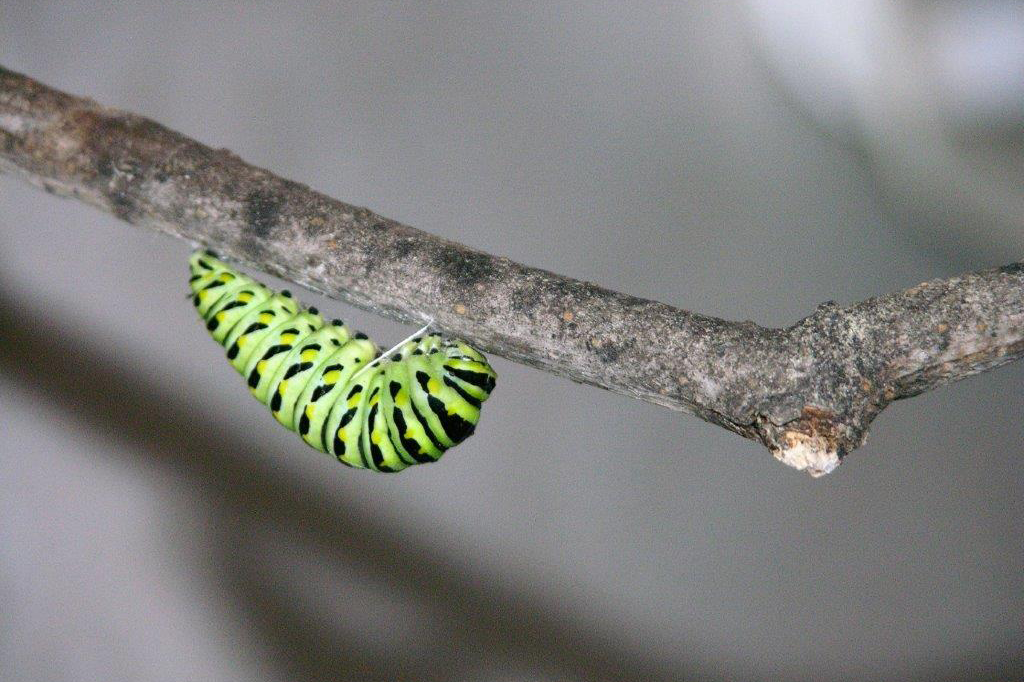 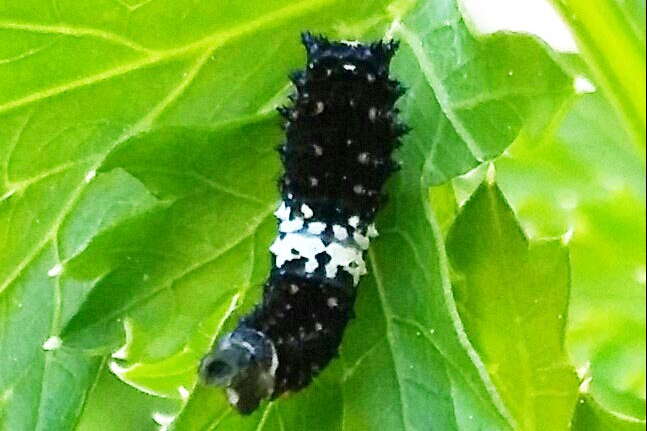 I saw my first yellow swallowtail on June 6 at a funeral at a Niagara Falls cemetery. During the prayers and readings, it flew down onto the flowers on the casket and then flew off.

It returned, landing on the other side of the arrangement and then flew away. “How symbolic,” I thought.

About a week later, I was called by a friend who had seen a black swallowtail laying eggs on her parsley. She had found one tiny caterpillar and offered it to me.

At a week old it was just two millimetres long. Now I carefully check the leaves of all the parsley I have planted – mostly to attract these beauties. Other host plants include celery, dill, sweet fennel and caraway.

Young eggs are tiny yellow “balls” and turn brownish as they mature. Within a few days, the eggshells turn clear, but look black to the naked eye. That’s the colour of the wee caterpillar about to emerge.

When first born, the caterpillar will eat the eggshell and then begin to munch on its host plant.

Because these caterpillars are not necessarily as toxic to predators as the monarch caterpillars, they have other defences. The younger stages (instars) disguise themselves by looking like bird droppings. They are knobby and black with a white ring around their middles.

Last year, while on a walk, I spotted a black swallowtail laying eggs on some Queen Anne’s Lace – wildflowers that neighbours had encouraged to grow on their boulevard (instead of grass like all their neighbours).

Trying to remember which flowers the butterfly had landed on was a challenge. However, I picked those I thought it had visited and brought the small bouquet home with me.

I placed it into a vase and hoped I’d chosen at least one with an egg on the bloom. About 10 days later, I finally noticed a little caterpillar and then found several more that had hatched. The eggs and the wee newborns were so tiny that I had not seen them.

Eventually, after one of the little caterpillars shed its skin, it developed its beautiful colouring underneath.

During its final stages, the caterpillar is smooth and beautiful. It can be black, green or yellow with striped, dotted segments.

Older caterpillars look nothing like the younger ones, but they still have a special defence to ward off predators.  When disturbed, they rear their heads and exude yellow horn-like protrusions called “osmeteria.” This is called a “startle defence” as it frightens predators into looking for a meal elsewhere.

At this stage, the caterpillars are absolutely voracious. I had to be sure to put lots of parsley in the large pickle jar where I was keeping these beauties. And, so they wouldn‘t escape, I covered the jar with nylon net.

After a couple of weeks, the caterpillars search for a place to pupate. They will move around until they attach themselves in a vertical or horizontal position somewhere to a branch or other appropriate spot.

Because I want to keep an eye on them, I place a small branch into the jar. They attach themselves to the branch by a “thread” that forms a “seatbelt” so it can lean back and begin to change shape. Fresh pupae can still startle predators by jerking around in their pupal case if disturbed.

One caterpillar attached itself to a thick parsley stem. Its pupa (chrysalis) was green while the others that attached themselves to the branch were the colour of the bark.

Note that the butterfly caterpillars do not spin cocoons like moth caterpillars do. That is why they are called a chrysalis, not a cocoon at this stage.

Last year I had taken two chrysalises along to a one-hour appointment – just in case they decided to come out while I was away.

Nothing happened while I was there, so I took the jar back to the car, stopped briefly to pick up something and when I got back into the car after less than 10 minutes, there were two beautiful butterflies on the twigs in the jar.

However, as they can’t fly at this stage, I was able to drive home. Our neighbours were quite surprised to see me come out of the car with the sticks from which the butterflies were hanging.

Not all butterflies will emerge during the summer. The ones that have hatched later in the season will overwinter here.

When I had some of the later ones, after they had gone into chrysalis form, I put my jar outside in a safe place and started checking them in May.

One day I noticed each of the chrysalises had opened and the butterflies were gone. I hope they found mates and made others as happy as I was when I saw them change from one stage to another.

Last year one caterpillar escaped and I couldn’t find it anywhere in the house. One day it hatched and came crawling out from behind the fridge in our kitchen.

Unfortunately, one of the wings had bent as it tried to leave its tight space.

However, I was able to lift it carefully when it crawled onto my finger, took it outside and placed it onto my butterfly bush to feed.  I don’t know what happened to that one as I didn’t see it fly away.