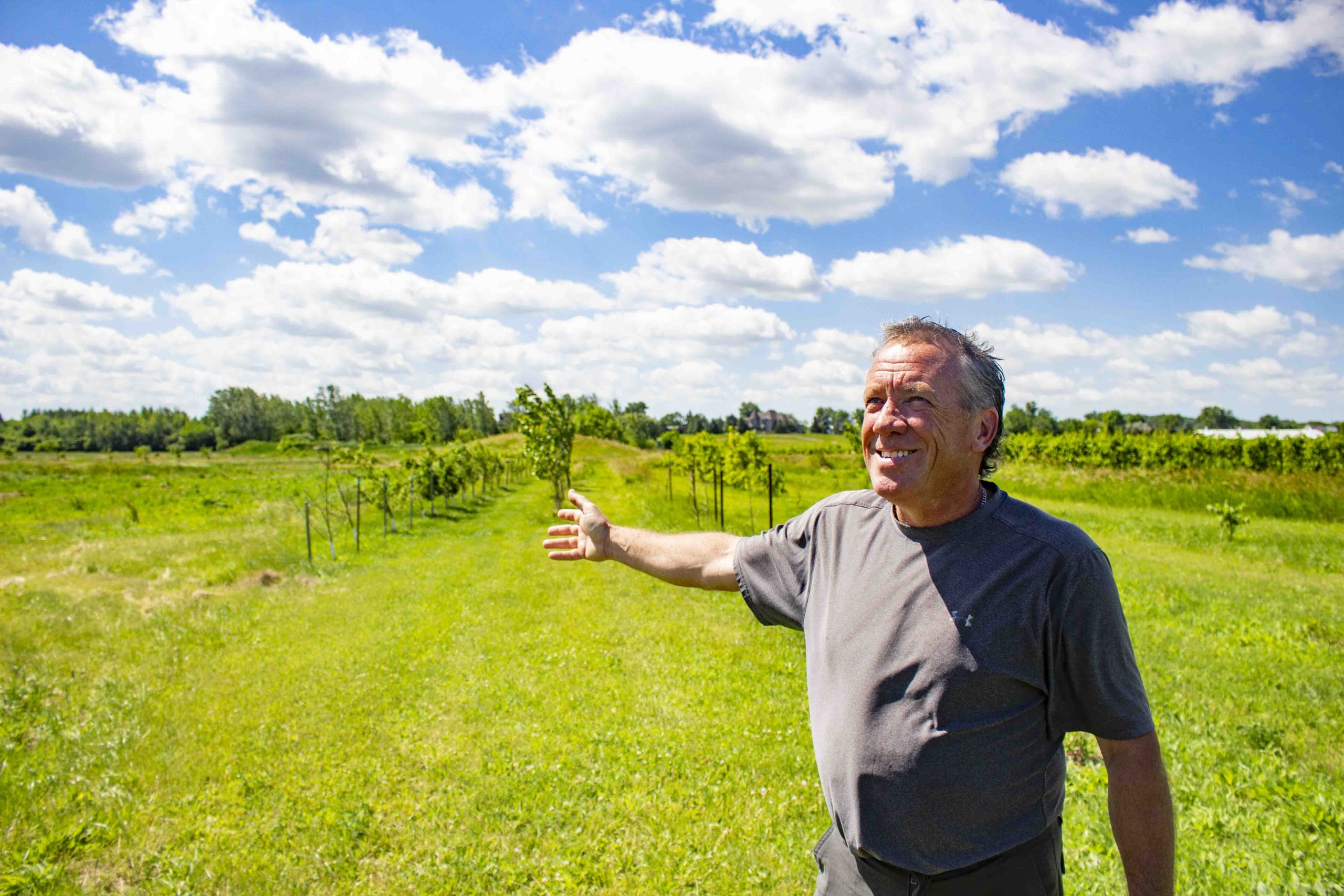 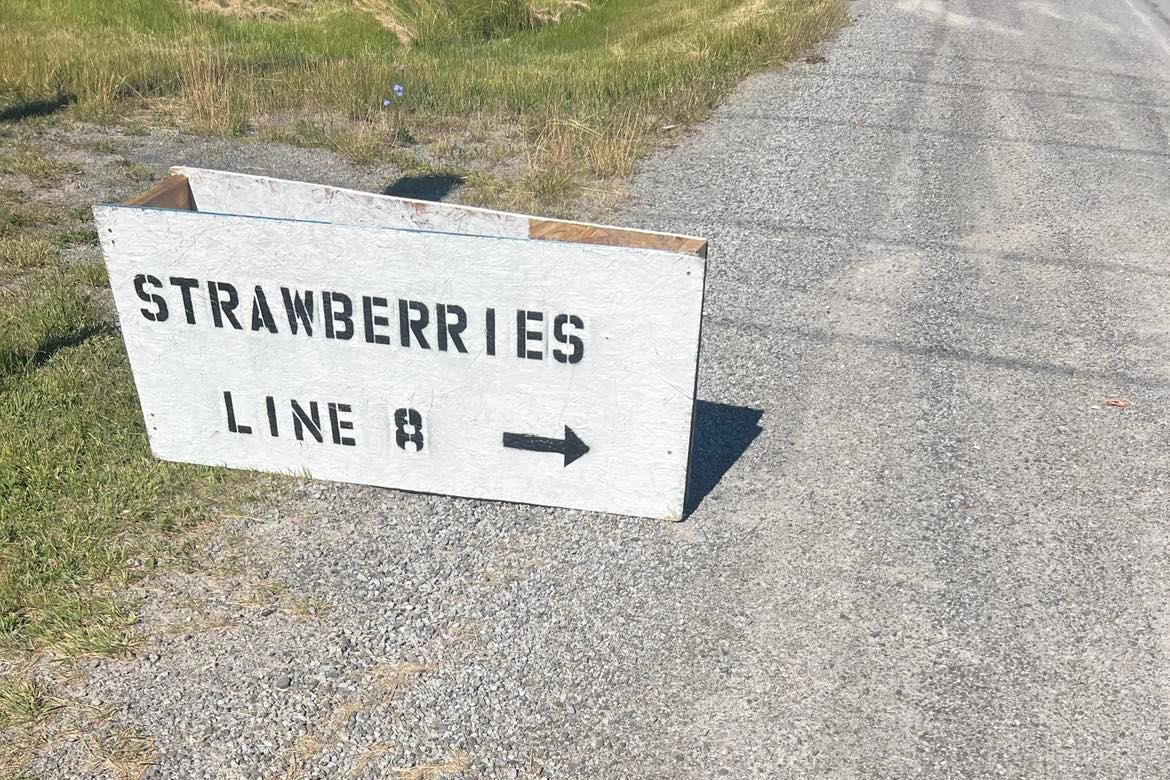 A small sign along an empty road shoulder can make a big difference.

For years, White Orchard Farms’ owner David White has seen a big impact from a little sign he puts out daily. All it says is “Strawberries” with a small arrow pointing in the direction of his farm.

One June 10, the Town of Niagara-on-the-Lake removed the sign, saying it was a safety hazard for motorists on York Road.

“We never complain. We’re paying our taxes, we’re paying everything else. Just help us promote with a sign. That sign means the world,” White said in an interview.

Every morning White grabs a small foldable sign and takes it out to York Road. He said  he puts it on the shoulder at 9 a.m. and takes it in at 5 p.m.

For an out-of-the-way farming operation like White’s, that roadside attraction is one of his few means of drawing in customers daily.

White Orchard sits at the very end of a dead-end on Line 8 Road. No one ever drives by unless they are already heading to White’s operation for his produce and other goods.

“We’re off the grid. We have no way to promote,” said White.

He said the difference in foot traffic at their farm is noticeable without the York Road sign.

“We went from selling (108 quarts) of strawberries every two or three days down to three quarts,” White said.

However, the bylaw also states that the town recognizes “the commercial communication requirements of all sectors of the business community.”

Wording like this may lead people to believe the town would be open to working with White to come to some form of compromise that lets the farmer advertise his honey, garlic, strawberries and other NOTL-grown produce.

But so far, White said, no one from the municipality has reached out about the York Road sign situation.

They just scooped it up and took it. And he says he will just keep putting one out until someone from the town takes the time to speak with him.

In an email, town staff said they took down the sign in response to a complaint.

“A concern was made to the town about a sign impeding traffic sightlines,” town spokesperson Marah Minor said in an email.

“After this inquiry was received, a town bylaw enforcement officer was dispatched to investigate the sign. The bylaw officer found that the strawberry sign was on town property and in violation of the town’s sign bylaw,” she said.

“There were also minor sightline issues which posed a risk to public safety. Therefore, the sign was removed.”

Minor said the sign was removed prior to consultation with White because it was considered a safety issue.

“Typically the town attempts to educate first. However, due to the safety concern in this circumstance, the sign was removed immediately.”

White learned from a neighbour that the town grabbed his sign on York Road. So, he trekked to the bylaw enforcement department at the town hall and dutifully paid a $75 fee to retrieve it.

This game of cat-and-mouse has been going on for several years with a sign White previously set up at the corner of Concession 7 and Line 8.

The first time it was taken, White assumed it was because the sign was not up to town standards.

After that, White says he spent about $3,000 getting the land surveyed and upgrading the sign to avoid any problems.

Adding to his frustrations, he even had the Concession 7 and Line 8 sign installed on private property with written permission from the landowner.

“Two weeks later my customers are calling me, ‘Dave, your sign has been taken by the town,’” he said.

Both times the sign was taken White says the town never reached out to him.

It was only after he went down to town hall himself that bylaw officers told him he isn’t allowed to erect a sign on third-party property, White said.

In response to issues about his Line 8 and Concession 7 sign, White has now installed it on his own property, something the bylaw permits.

But the only people who see it are those already driving all the way to White Orchard.

“It’s been there for six years. Never a problem and now they just start taking it down,” he said.

“And it’s not like it’s a sign stuck on a pole somewhere. It’s out in the morning and it’s back in at night.”

White said the sign has been left alone ever since The Lake Report inquired about the issue with the town.

As a farmer who only sells fresh NOTL-grown produce for cash, he said there should be a way for him to work with the town to try to attract customers.

But the lack of communication or willingness to have a conversation has led to feelings that the town does not care about small operations like the White family’s.

“Work with me. The town will not work with the small farmers,” he said.

“We have no water — we have a cistern — we have no sewage. We pay our taxes. We don’t complain.”

As of June 28, White said he has not received any communication from the town about the sign.

This isn’t a political issue for him and he doesn’t blame the current council or mayor for the sign bylaw, he said.

But he does hope he and the town can reach an amicable solution.

White said he strives to be a good community member in NOTL and only wants to be treated the same way by town officials.

He cited an incident from several weeks ago.

“Somebody was driving down Concession 7, they had just adopted a dog and the dog jumped out the window,” he said.

“We shut down the farm and the family took our ATVs and we all went out looking for the dog.”

“That’s the kind of family we are. We don’t want trouble. We just want (the town) to work with us.”

Minor said the town is always willing to work with residents “to come up with a solution that is agreeable to both parties.”

White, who has owned the farm for about eight years, said “People love (NOTL farms). It’s what makes this town Niagara-on-the-Lake.”

He said White Orchard is his and wife Tracey’s retirement plan.

“This is our future. The town looks at us as being just another person but we have nothing (without this farm).”

White was enthusiastic about all the natural products he produces at White Orchard. He also produces fresh honey and recently bought eight new beehives for his apiary.

He just wants people to be able to find his farm so he can sell his produce.

Letter to the editor: Federal money goes to research, not directly to grape growers

Fire aftermath: Burned-out NOTL facility wasn’t just a business, it was a ‘community’

Old Town car crash: Both drivers were locals, not tourists