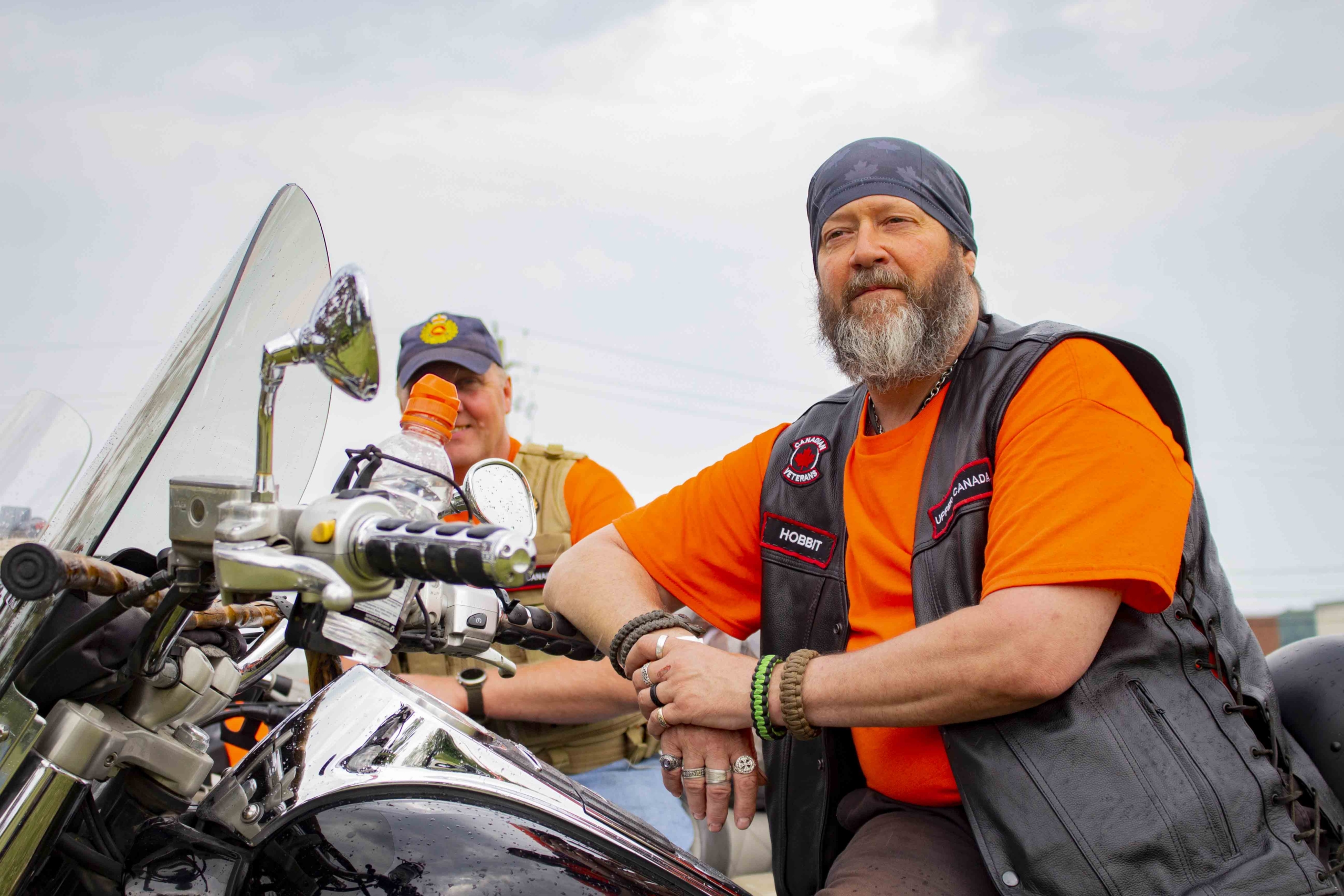 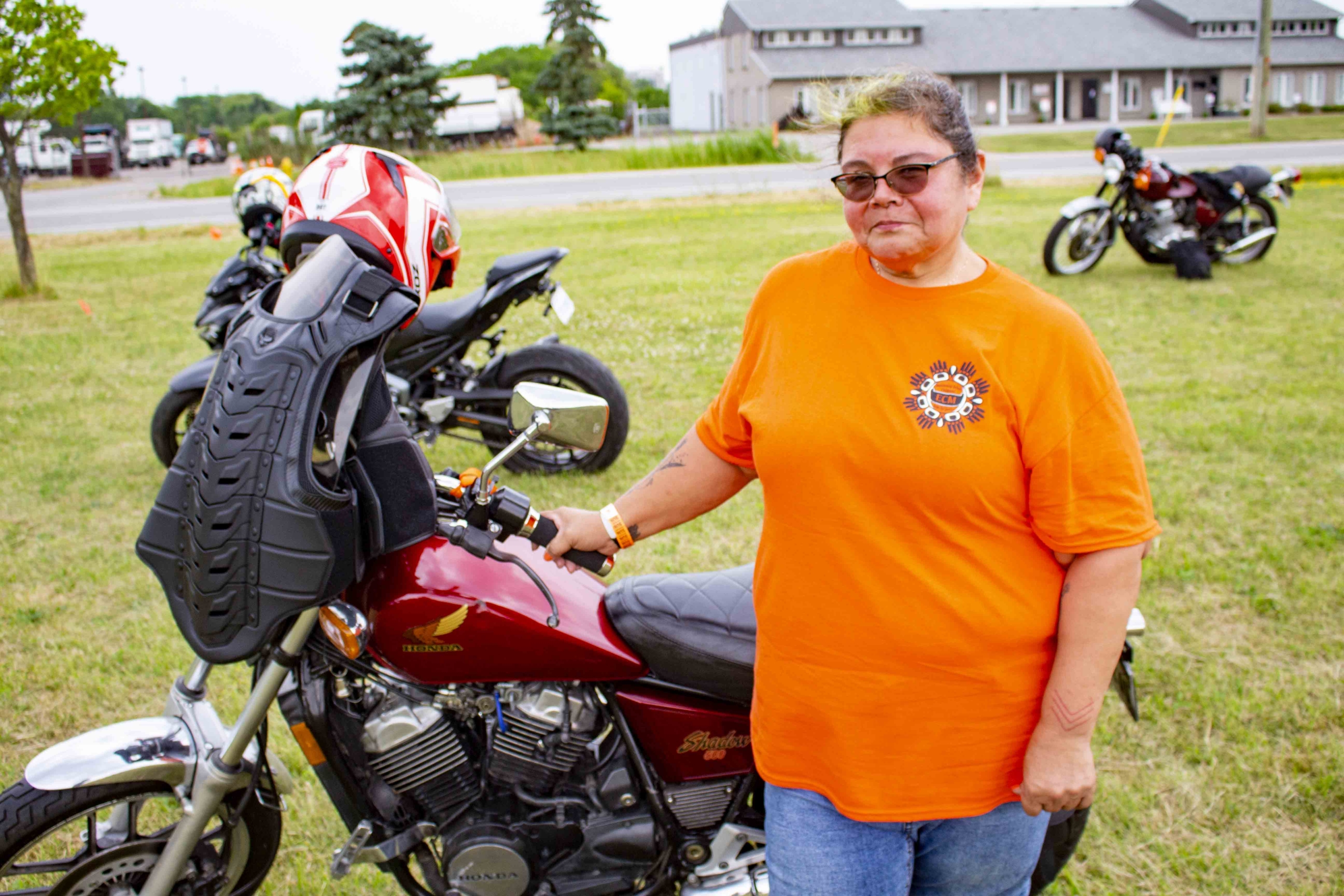 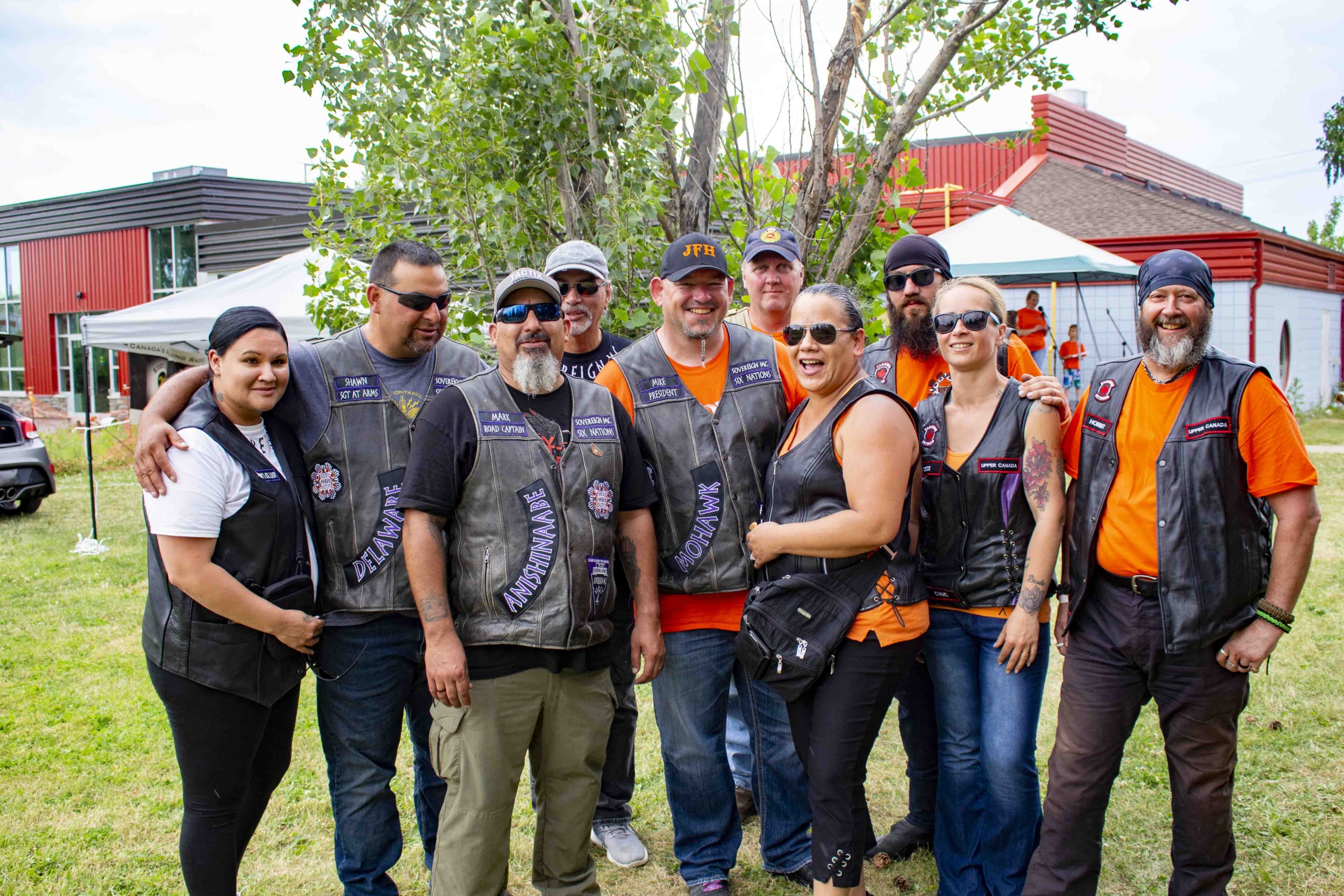 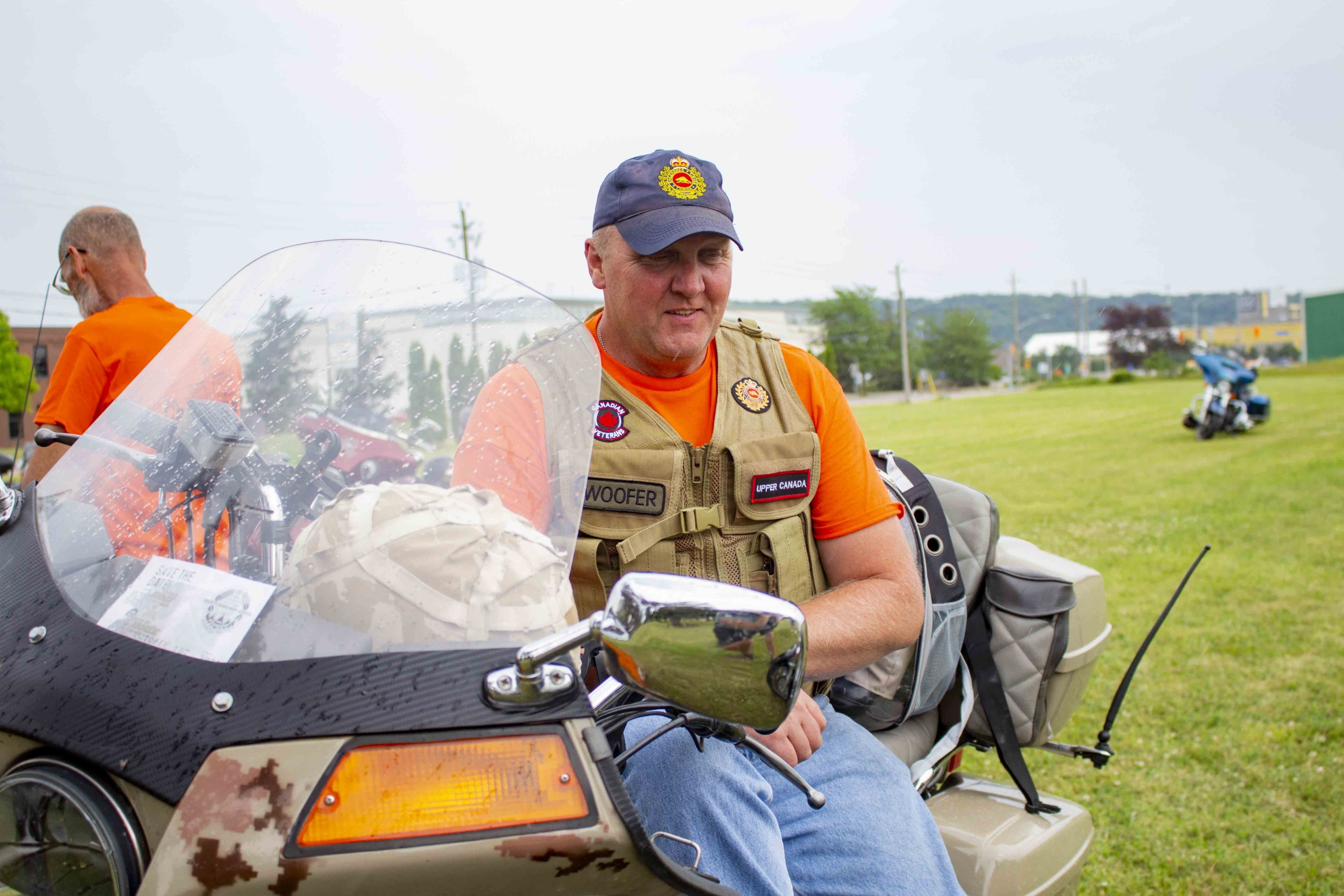 A long line of motorcycles descended on the Niagara Regional Native Centre on Sunday for the second annual Residential School Children’s Ride for Justice.

“It’s been a long day. But it’s been an amazing day,” Ride organizer and Haudenosaunee Wanda Griffin said during an interview at the centre.

Griffin said the goal of the ride is “to raise awareness of residential schools.”

The ride saw hundreds of motorcyclists from across the province ride in solidarity with Indigenous people in Canada to offer support and raise money.

Money raised from the ride will be donated to several organizations that work to help Indigenous people deal with residential school trauma. Some of it will go to the Niagara Regional Native Centre, which hosted the event and organizes a myriad of outreach and support programs for Indigenous people in the region.

Griffin said the trauma inflicted on Indigenous people in residential schools has travelled through generations, even if immediate relatives did not attend one of the schools.

“They usually say it’s seven generations so, hopefully, my children will never have to know what it was like to have that trauma.”

“But I know because of my mother. So, hopefully I’ve broken that chain. It can be very, very difficult to break. It’s just like an addiction.”

The Mohawk Institute was the oldest continually operated residential school in Canada. It began operations in 1831 and closed in 1970. The school grounds will soon be the subject of a ground search for children’s bodies.

For the ride last year, the institute was the final meeting place. Due to its impending ground search, organizers opted to have people meet at the Native Centre.

Combating the trauma of residential schools is essential for the longevity of Indigenous culture and also enables dialogue around the horrific legacy of Canada’s systemic discrimination to take place, Griffin said.

She said it was great to see such a big crowd of people there in solidarity.

“Seeing the bikes come in and seeing the support of Indigenous and non-Indigenous people is breathtaking and the fact that they feel the need to rally around,” Griffin said.

“Which is good because that’s how we’re going to make it so things like this never happen again, right? And that’s what we need to do and that’s why it’s so important to Indigenous people to let other people know.”

She said, despite the high profile discovery of 215 children’s bodies on a residential school property in British Columbia last year, the narrative and truth of residential schools in Canada needs to be continuously publicly addressed.

“Like, ‘Do you know what happened in your backyard?’ A lot of people don’t even know what’s sitting in Brantford.”

Griffin said Indigenous communities are preparing for horrific discoveries on the grounds of the Mohawk Institute.

“We know the numbers are going to be high. It’s going to be very, very traumatic for the community when those numbers come out,” she said.

“But at the same time this is something we need to do for those little bodies, those little people. Because they haven’t been laid to rest properly.”

She said that even if bodies are discovered, the tragedy remains that identification will be next to impossible.

“The families are never going to know. There’s no way we can tell who they are, the only thing we can tell is they were male or female between this and that age.”

“It is hard. It’s hard to hear about it. But at the same time specifically for the parents, it needs to come out.”

Last year around Canada Day, the Niagara Regional Native Centre’s executive director Karl Dockstader said one of the hardest things for Indigenous people has been trying to convince skeptical Canadians that the horrors they always knew took place at residential schools were real.

In the year since Canada began its public reckoning with the history of the schools, Griffin said that challenge still exists.

“The sad thing is we’re still coming into contact with people who don’t believe it happened. ‘It didn’t happen,’ or, ‘that was way before my time.’”

“Like with me, I’m just lucky that the Mohawk Institute closed in 1970. If I had been a couple years older, chances are I would have been sucked into it too.”

Griffin has taken the responsibility on herself to ensure her children do not grow up with any of the negativity residential schools tried to place on Indigenous children about their culture.

“As a mom, I’ve tried to teach my kids how to be empowered, how to have a voice. And that’s extremely important because, as Indigenous, we have to have that voice. We have to be able to speak for those who can’t speak.”

Griffin said she hopes the Ride for Justice is an even bigger event next year.

“Maybe we can have other Indigenous centres doing the same type of thing in other areas or other provinces.”

“That’s what I would love to see.”

Griffin is a motorcyclist herself and found the support from the community moving.

“The second and third round that came in, I was in tears. I was in absolute tears because it’s just so touching that there can be this many people that support something like this,” she said.

“We all know it’s a worthy cause and we’re about jumping in and helping out with good charitable causes,” said motorcyclist Paul Dacruz

Dacruz is a member of the Canadian Veterans Military Club.

“We were asked to join in and we thought it was a good cause,” said armed forces veteran and club member Steve Mann.

The veteran club got involved in the ride through another club, Sovereign M.C. out of the Six Nations reserve near Brantford.

“It’s something that we support anyway being from Six Nations ourselves. It’s close to our heart so we decided to make it an official ride that we would participate in this year,” said Sovereign M.C. president Mike Player.

“Every member of our club is of aboriginal descent so it’s all really close to us, with relatives that have survived the residential schools. It’s a personal connection. It’s our culture, it’s who we are as a people.

“The fact that we’ve endured so much suffering over the last two hundred years, it’s important to us as a club to always maintain our cultural values. We make it a point to support those things that are close to our community, that benefit our community.”

“One of the most important things for us is to always give back to our home communities.”

The Sovereign M.C.’s will be holding their own ride to raise awareness about residential schools on Sept. 24, called the Unity Ride for the Children.

The ride’s starting location has yet to be determined but the final destination is set in stone — Queenston Heights Park and the Landscape of Nations monument.

Although the ride is done for now, individuals can still make donations at resschoolrideforjustice.ca.

Letter: The kind of neighbour Lukas Smith was

Talk of the Town: No water testing? ‘Why not?’

RATG gets things geeky in Welland

Petition against noise bylaw garners hundreds of signatures in hours