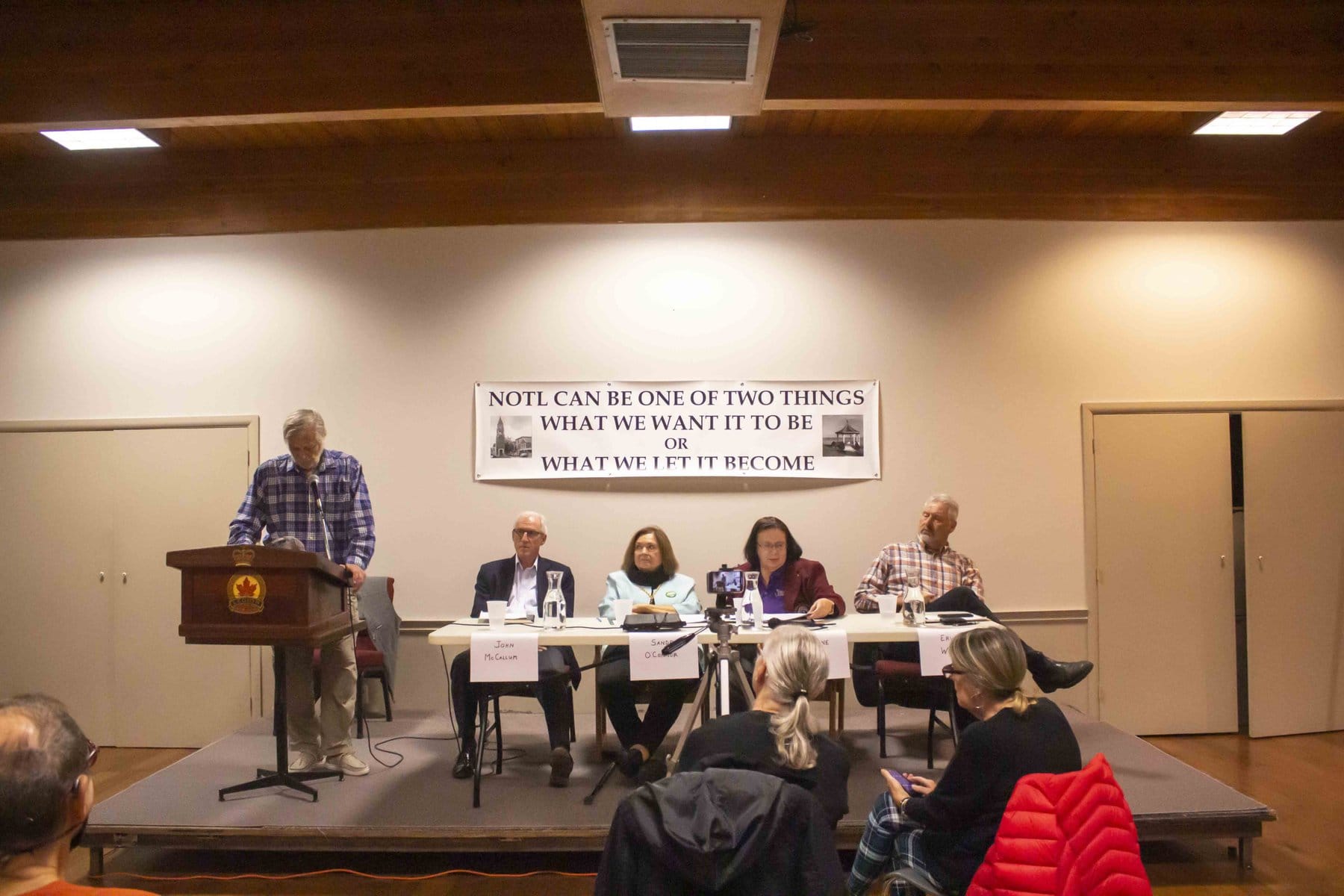 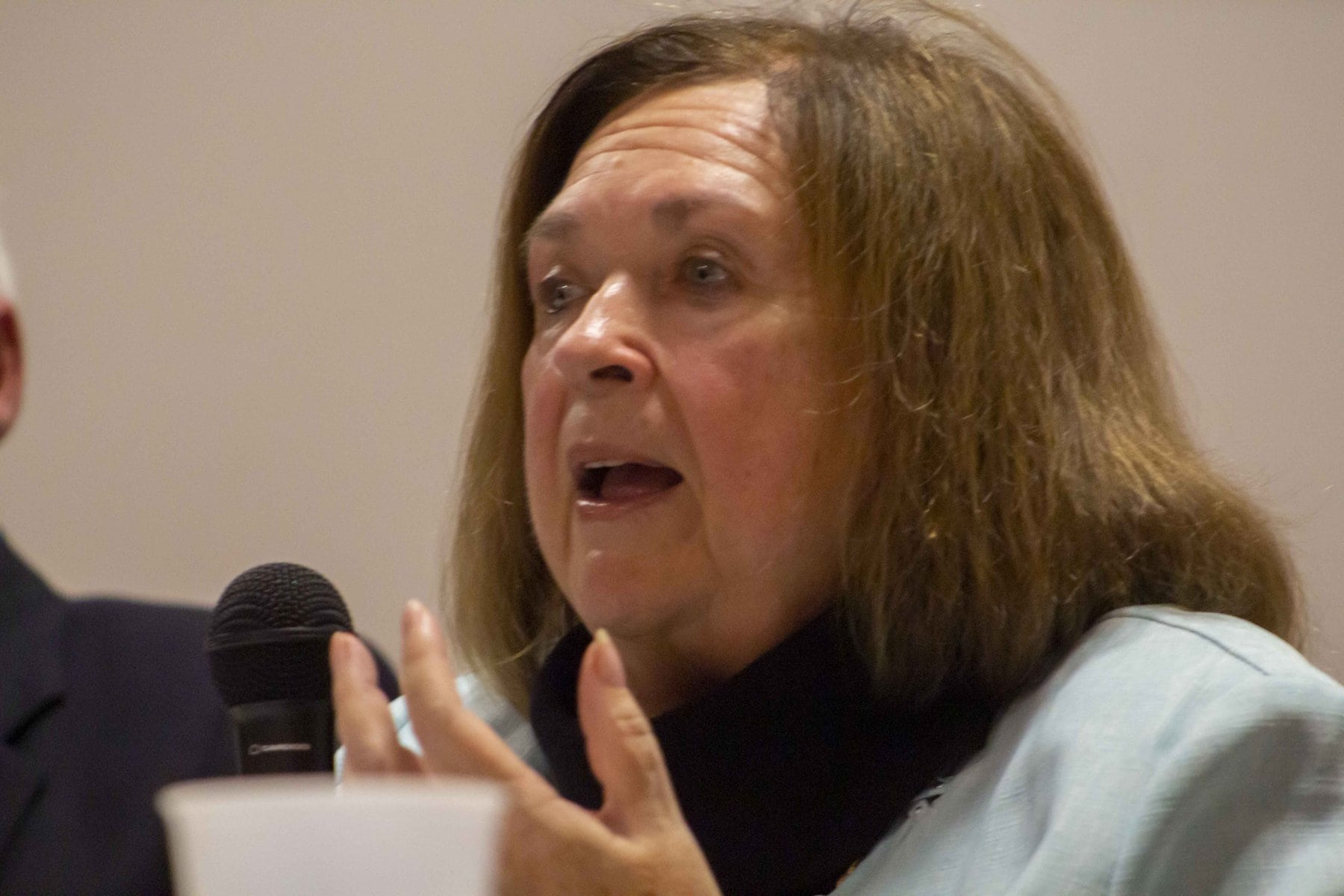 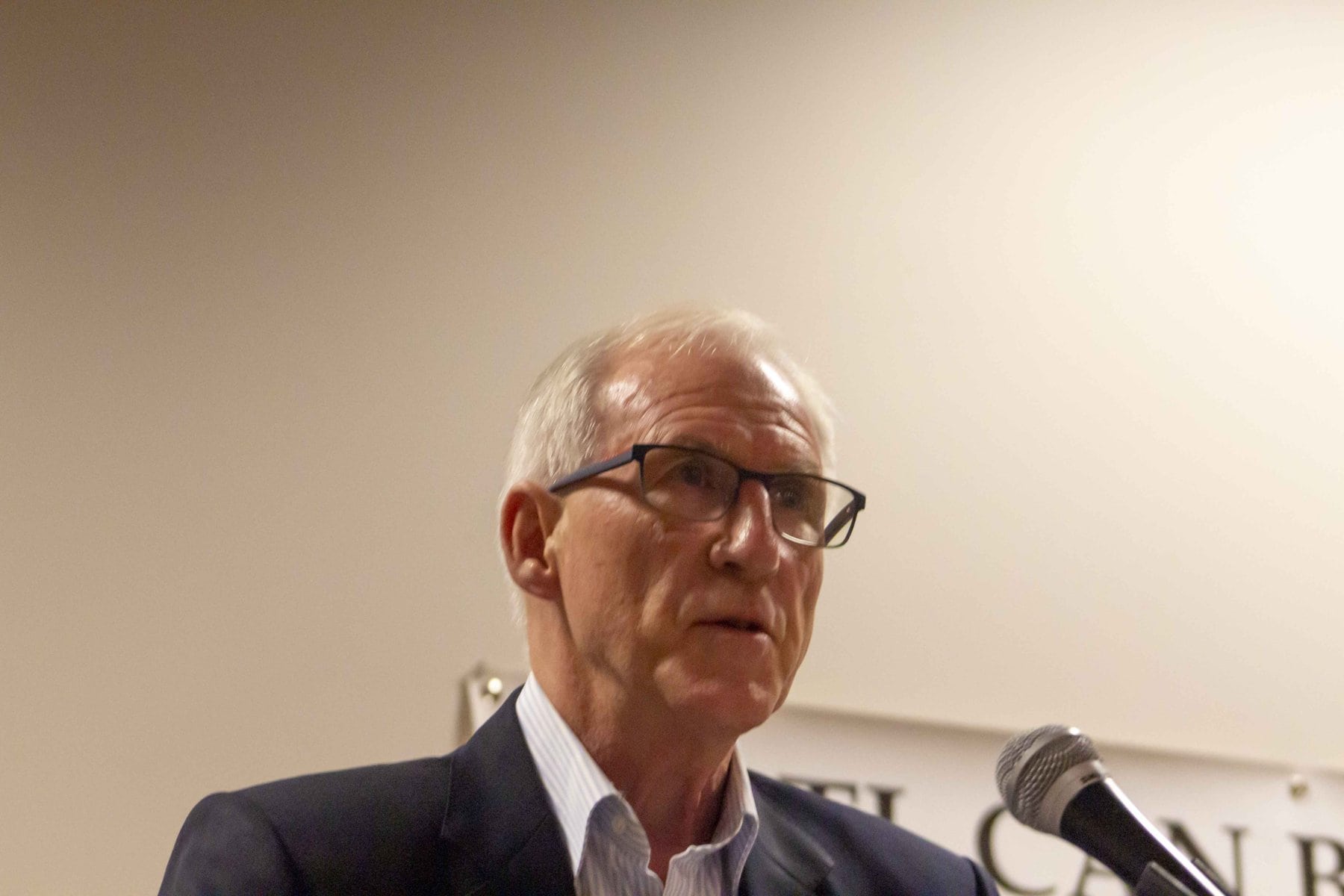 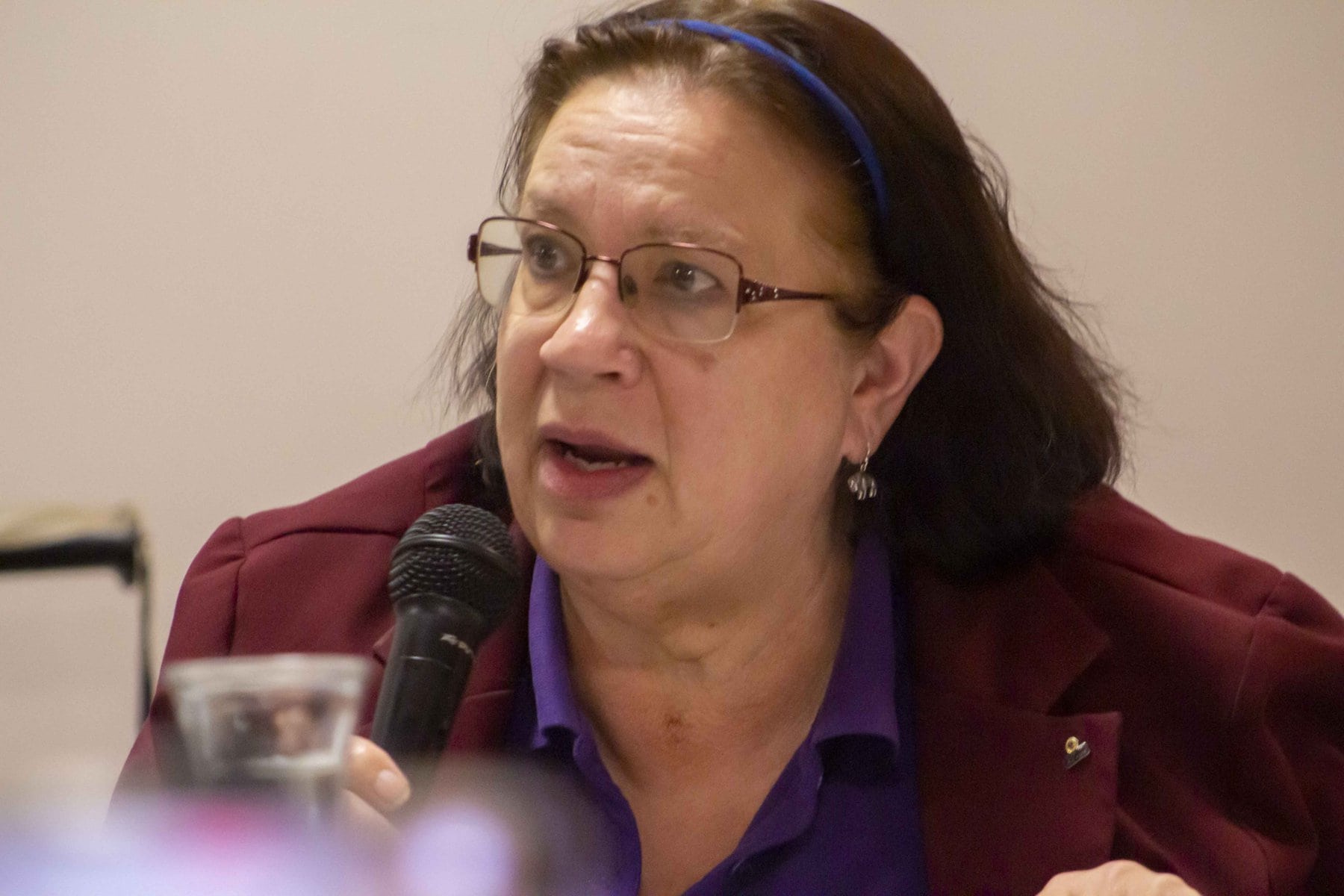 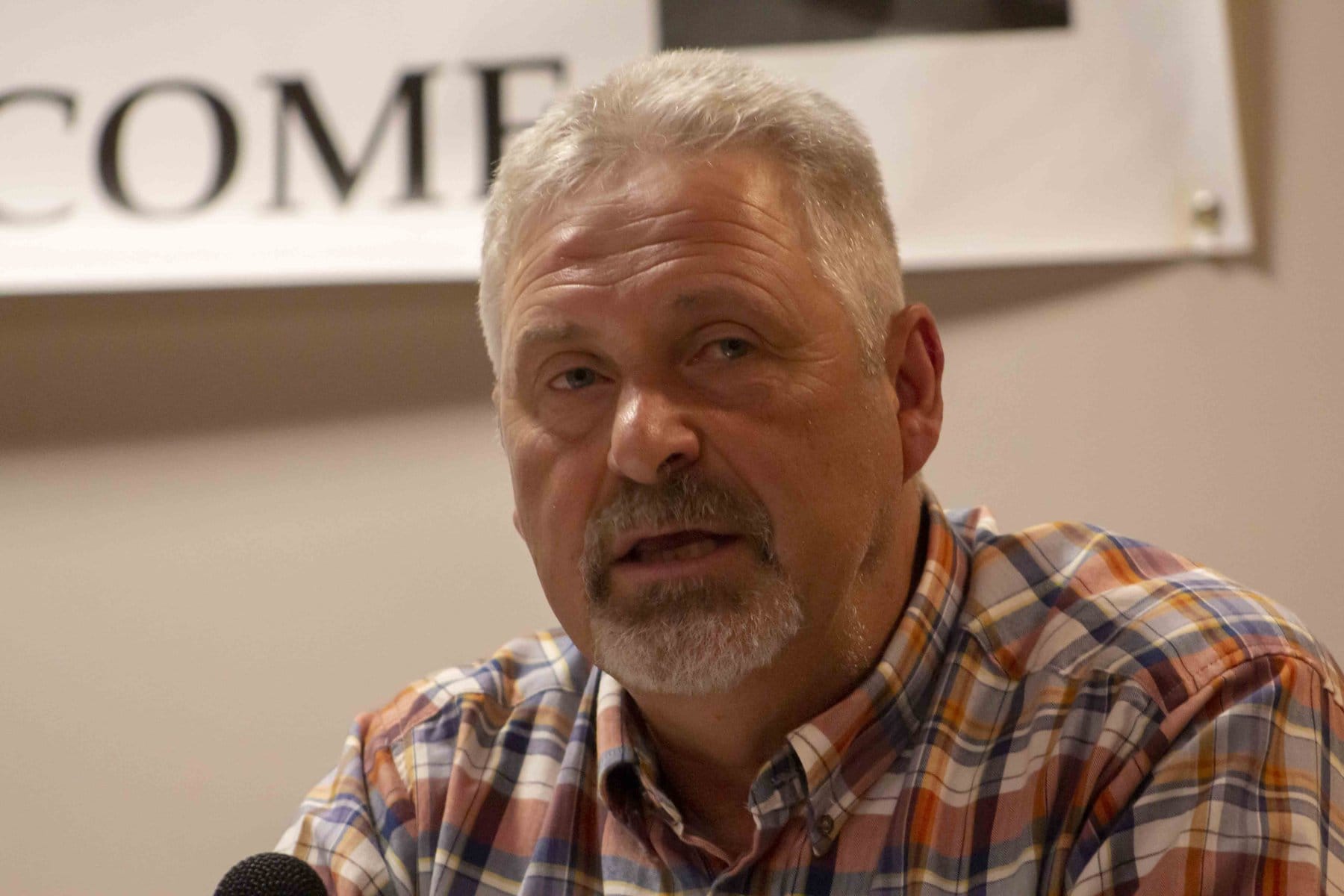 “Collaborate” was the word in the seats if not on the street at a candidate Meet & Greet session last Tuesday.

The four candidates at the forum organized by FocusNOTL agreed the town must collaborate with higher tiers of government and town residents to move forward, especially on issues of political transparency, infrastructure and development.

Incumbent Sandra O’Connor voiced her support for contextual zoning and added that she wanted to “focus on the climate change and environment aspect of the question.”

“We need to look at things like low-impact development when we have new developments,” she added.

O’Connor sat on the town’s environmental advisory committee which was instrumental in getting the town’s climate change adaptation plan done.

The new council will have to rewrite much of the environmental section of the official plan after being ordered to do so by the region in August.

Incumbent Erwin Wiens said council needs to work closely with “upper levels of government,” but also with the town’s urban planners when managing its development.

Retired accountant turned council candidate John McCallum said once the town’s official plan is finalized the town can flesh out some further details, like “whether the heritage area should be expanded.”

Whatever choices councillors make, they need to work in all the settlement areas, he said.

Katherine Reid pointed out that plans are all well and good, but as a member of the Queenston Residents Association, she was amazed at how often the town’s plans aren’t followed.

“We have to have a playbook, but also maybe follow some of the rules that are in the plan,” she said.

The town’s roads and infrastructure came up when the candidates were asked about bike lanes.

O’Connor has been pushing to standardize bike lanes with all road construction projects, but learned recently that the current council has failed to standardize them.

She wants council to get it done in the next term, adding, “We have to get the region on side with bike lanes.”

Reid said when she sat on the town’s safety committee they invited migrant workers to a training session where they used Spanish videos to teach them about bike safety.

“We do need to inform everyone about bicycle safety,” she added.

Wiens agreed that public outreach and education will help but said the town needs to spend more on road repairs.

“We need to fund the road system to get those shoulders in tip-top shape,” he said, adding that the town was well behind with its road maintenance.

McCallum agreed with O’Connor that road maintenance will require co-operation with the region because many of the rural roads are owned and maintained by the region.

“I think council should go through and try to think about those roads that are critical to have bike lanes on and then press the region,” he said.

The candidates also fielded a question about when a councillor should recuse themselves  from debates.

“I’m a second-generation farmer and I sit on the irrigation (and) agricultural committees. I have a vested interest in those,” said Wiens, who argued that this did not constitute a conflict of interest.

Wiens’ electoral base is largely made up of the town’s farming community, he noted.

“(Farmers) elected me to represent them at the table. That’s what I’m there for.”

O’Connor said that unless a councillor has a direct financial connection to a company being discussed at council, they shouldn’t need to recuse themselves.

But it is “a fine line” and each councillor has to decide for themselves where that line is, she said.

McCallum agreed with O’Connor and Wiens and added that the power of recusal could be abused.

“I would not want to use (recusals) as a screen for councillors to be able to perhaps avoid having to opine on or vote on an issue that might be very, very contentious,” he said.

How to maintain and improve transparency with the public was also discussed.

O’Connor told the crowd that council needs to address some issues privately, but was not specific about what those issues were.

She said she was not sure what should and should not be discussed in private.

The town’s communications department directs questions from the media to the town staff best equipped to answer them, but responses can sometimes take several days.

“We may have gone too far. I certainly am open to revisiting it to have a new look at how things worked,” O’Connor said in an interview afterward.

Reid said she has had trouble communicating with the outgoing council as well.

She said she applied to be on some of the town’s committees but never heard back.

Wiens appealed to his record of being outspoken and described transparency as an action.

“I’ve been outvoted, but I’ve been honest. That’s democracy. And I’ll continue to do that,” he added.

Short-term rentals were also a topic and McCallum noted he is “not a fan” of them.

“If they’re going to be in business, I certainly would want them being fully exposed to all the tax regulations that go with business,” he said.

The candidates all agreed the town needs stronger enforcement of rental rules.

“We need more people on the ground to enforce the rules that we have,” said O’Connor.

Reid added, “The bylaw officers are not working when you usually have a problem.”

Wiens said “the vast majority of our short-term rental people” are there to “assist” the tourism industry.

He said the short-term rental committee has come up with “rules that everybody can be happy with.”

Recent data on short-term rental enforcement showed the town has been making progress on the issue.

Voters can watch all the Meet & Greet sessions on the FocusNOTL Election 2022 YouTube page.

Getting the bad out of Lake Ontario

UPDATED: Store fined for patrons not social distancing inside shop and in doorway, mayor says