Harvest time in the vineyards in NOTL is a beautiful season, but it’s also synonymous with the resounding booms of cannons firing to scare birds away from the ripening grapes.

For years, bird bangers have been a source of tension between Niagara grape growers and residents who complain about the noise, and some question how effective they are.

As this harvest season gets underway though, a handful of growers are trying something new, a laser system designed to keep the birds away.

Wade Stark, vineyard operations manager for Peller Estates Winery, has a unit installed in a vineyard growing Gamay Noir and Cabernet Franc grapes behind the estate, near East and West Line.

“It’s a trial,” Stark explains. Last year the grapes in that part of the vineyard were netted, but this year “we decided to give it a go without the nets up.”

“I’ve been walking the treeline there every couple of days and I’m not seeing any evidence of bird pressure, though I am seeing it elsewhere,” Stark said.  “Without any deterrent, there would be bird pressure already.” 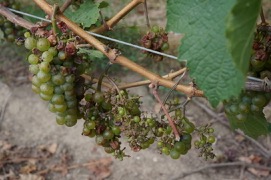 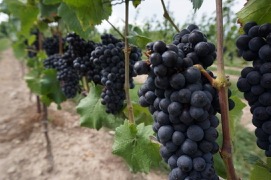 Stark points to a telephone pole at the edge of the vineyard, where the sma laser unit is mounted at the top.

The automated unit projects a green laser beam, which scares birds away.

“Birds see it differently than humans, we see it as a point of light, but birds see the whole beam. They perceive it as a solid object, like a stick of light, so they feel they’re under attack and they leave the area,” according to Jeremy Perkins, from Bird Control Group, which sells the units.

“It’s like a light sabre coming at them and they see it as a threat,” Perkins added.

There are two solar panels on the pole, which power the batteries on the ground.

“They never get used to it, because we set multiple different patterns that constantly change,”  said Perkins.

There are a few reasons the laser system is appealing to Stark.

“Cannons make a heck of a racket, so this way we can get away from noise pollution and protect the crop without injury to birds, which get caught in the nets sometimes.”

The other advantage is financial.

“Netting costs a lot and it’s labour intensive. The laser unit does require a short-term capital investment, but if it works we’ll save money long-term,” Stark said.

“It will take two years to pay back on the investment,” he estimated.

Other Niagara growers are giving it a try too, including Curtis Wiley, one of the owners of the family vineyard G & H Winery.

There are overhead wires near parts of his property where birds tend to gather.

“We’ve cut back on the number of bird bangers we’re using, but I can definitely tell birds are staying away from the laser,” he said. “It’s not 100 per cent, but I’m pretty pleased so far.”

Wiley estimated for him the payback on the cost of the system could take five years, based on the value of lost grapes.

At Malivoire Wine Company in Beamsville, operations manager Lee Kuhn has two units installed. Like the others, he finds initial signs promising, but says it's early days.

"We definitely see birds and bugs scared by the laser, but results are inconclusive in the short period of time we have had them running," he said.

When asked if other growers are curious about the laser system, Stark responds emphatically. “You bet! People are interested because it’s new. The most common reaction when I explain it is 'Wow! That’s cool!' ”

While early results are positive, Stark, Wiley and Kuhn are still evaluating.

According to Stark, “I’m hopeful, but we’ll watch it. It’s one step at a time.”

Bikes for Farmworkers founders riding off into retirement. Again

Exploring Photos: Virgil from above, in 1947

Dr. Brown: Henrietta Leavitt and the distance to stars