Leslie McCormick and chestnut thoroughbred Alex’s Love have a long and successful history of competing together, but the first place red ribbon they won together at the last Royal Horse show was especially sweet. McCormick, an experienced coach and competitor, says Alex “was always the bridesmaid but never the bride” over their many years of competing at the Royal. Alex always competed reliably, and brought many ribbons home to Red Ribbon Stables, the family run barn on Concession #6 in Niagara-on-the-Lake where McCormick coaches and trains, but until now, never a first. Their big win is documented in the February edition of Horse Sport magazine, noting they “won the Thoroughbred Senior Performance Under Saddle class.” 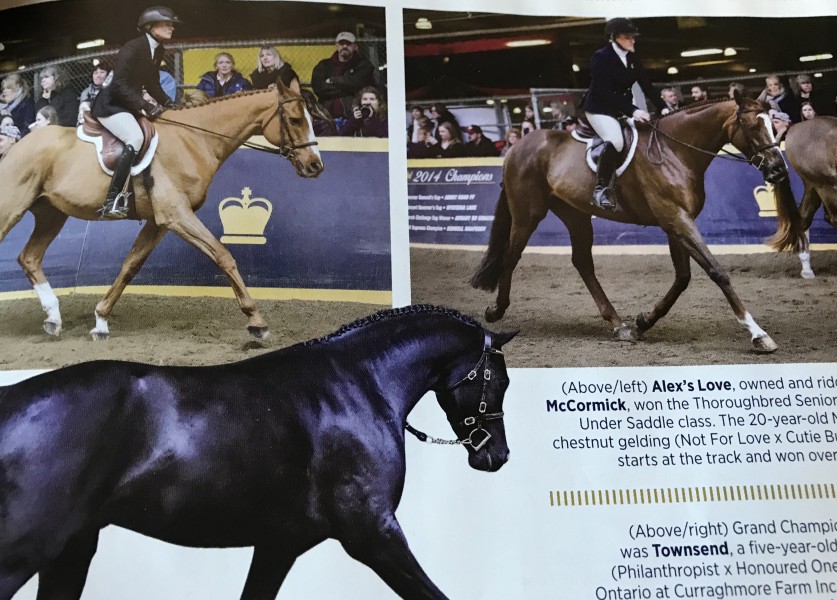 Alex first arrived at Red Ribbon Stables as a young racehorse, to spend winters there between racing seasons. He had a long and successful racing career, with 83 starts, 13 wins, 16 seconds, and 13 thirds, with career earnings of $190,323.00. McCormick says she loved his “movement, conformation, and manners” from the start, so when his racing career was over, McCormick sought out his owners and bought him so he could come to Red Ribbon Stables to stay, more than 10 years ago. “What you see is what you get with Alex,” says McCormick. “He’s a great asset to the farm, with a steady sweet disposition and lovely movement. He’s absolutely reliable, he would never do anything rotten.” Alex has helped many young riders get started in the school at Red Ribbon Stables, while also competing with advanced riders.

McCormick has a soft spot for thoroughbreds. Alex is one of 14 thoroughbreds living at Red Ribbon Stables, some owned by McCormick, and others who board at the barn. She says “the breed has been stigmatised as a high energy horse, but it all comes down to individual temperament. Thoroughbreds are a very versatile breed, they can come off the race track and become successful at almost any discipline, from hunter or jumper, to eventing, or even western barrel racing.” One of McCormick’s newest thoroughbreds, a big chestnut named Curly, came off the track in mid-September, and competed at the Royal Horse show just weeks later, in November. McCormick notes with some pride that “Curly placed 5th and 6th in the Junior Thoroughbred Under Saddle class.”

In addition to competing throughout the summer show season and at The Royal, McCormick trains horses, coaches riders, and hosts horse shows at Red Ribbon Stables. The lesson program has students of all ages, the youngest being 3 years old, the oldest at 60, with everything in between, and riders range from absolute beginners to advanced competitors. For more information visit the website at redribbonstables.com.

Bikes for Farmworkers founders riding off into retirement. Again

Exploring Photos: Virgil from above, in 1947

300 slabs come together to form one massive cake