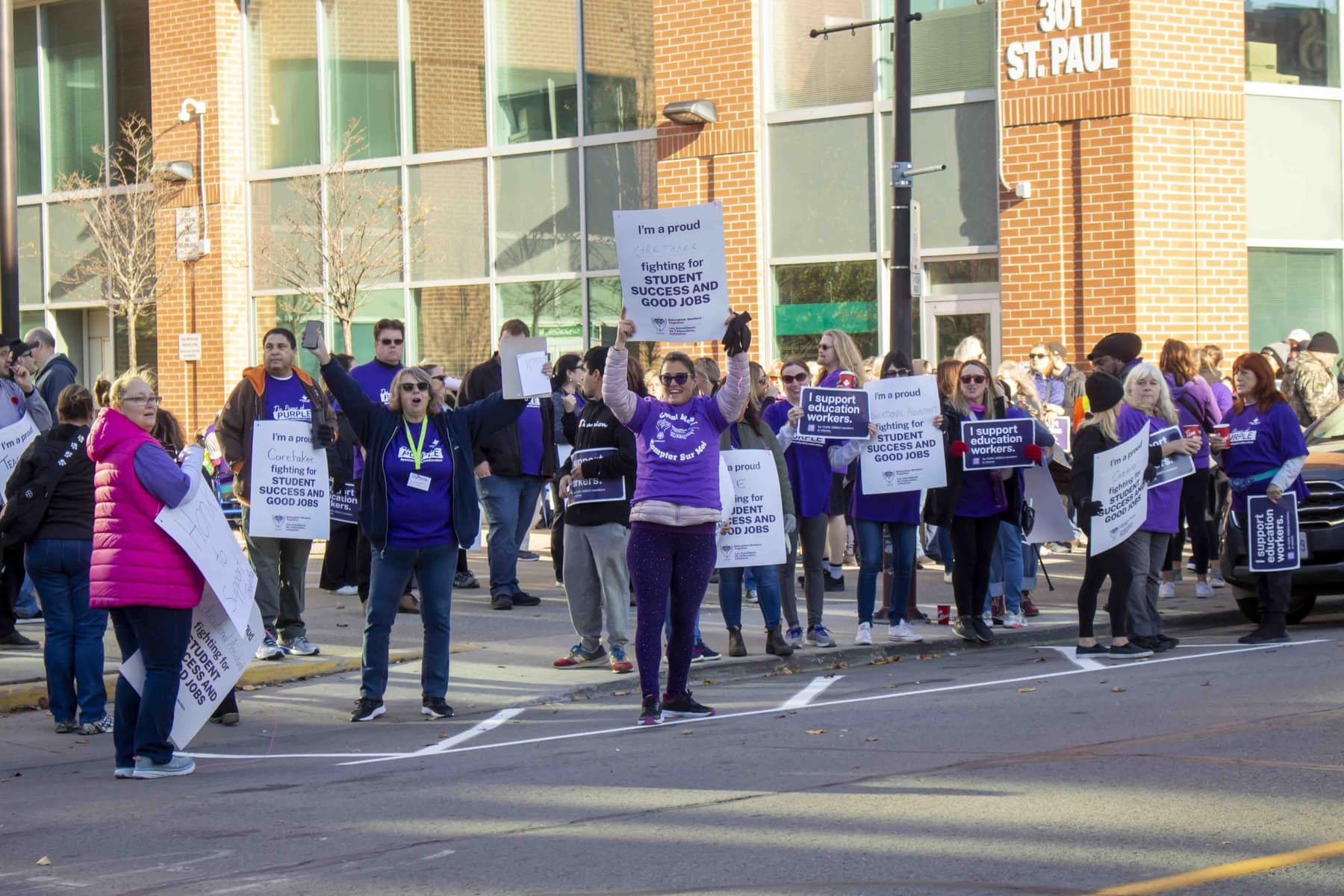 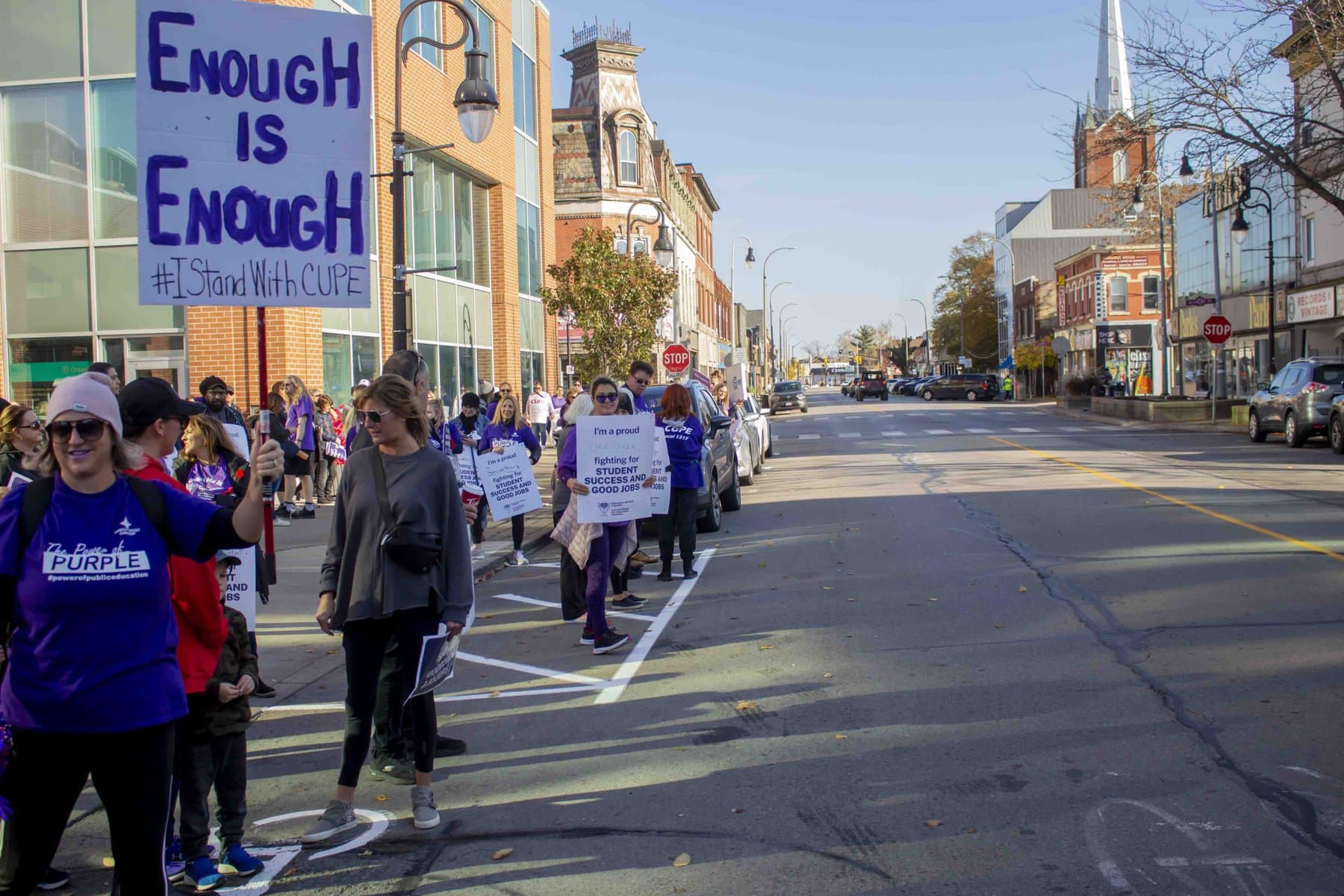 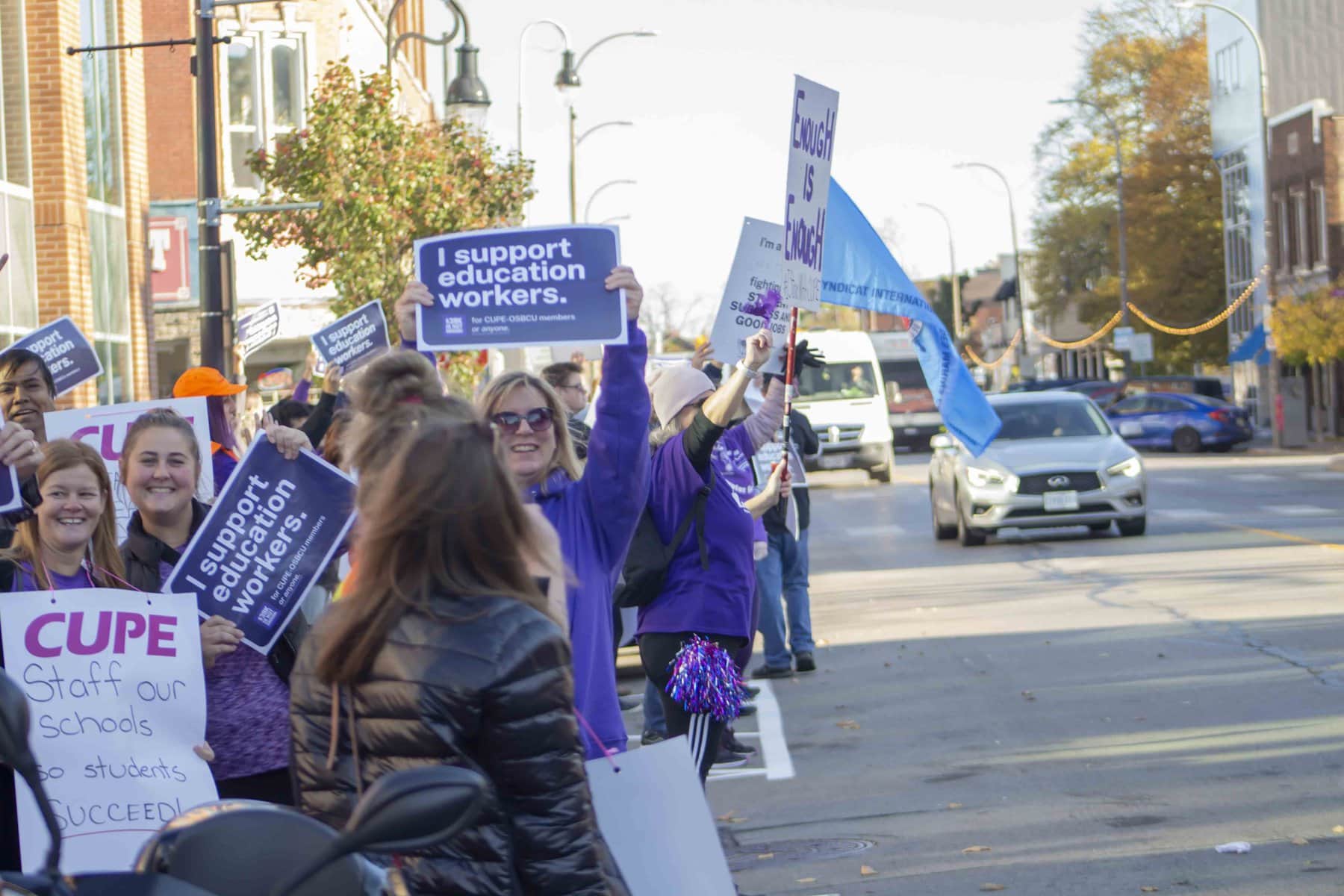 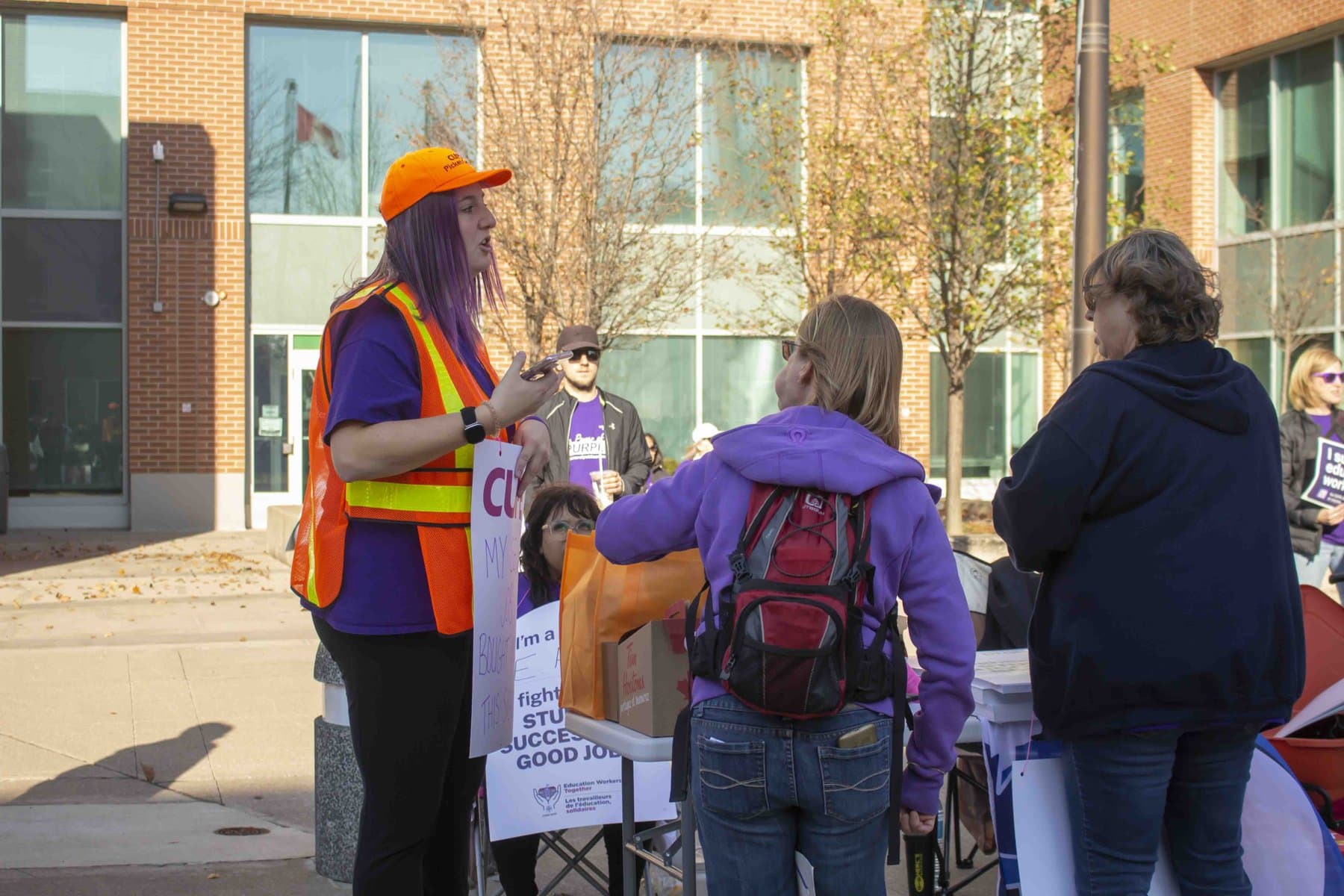 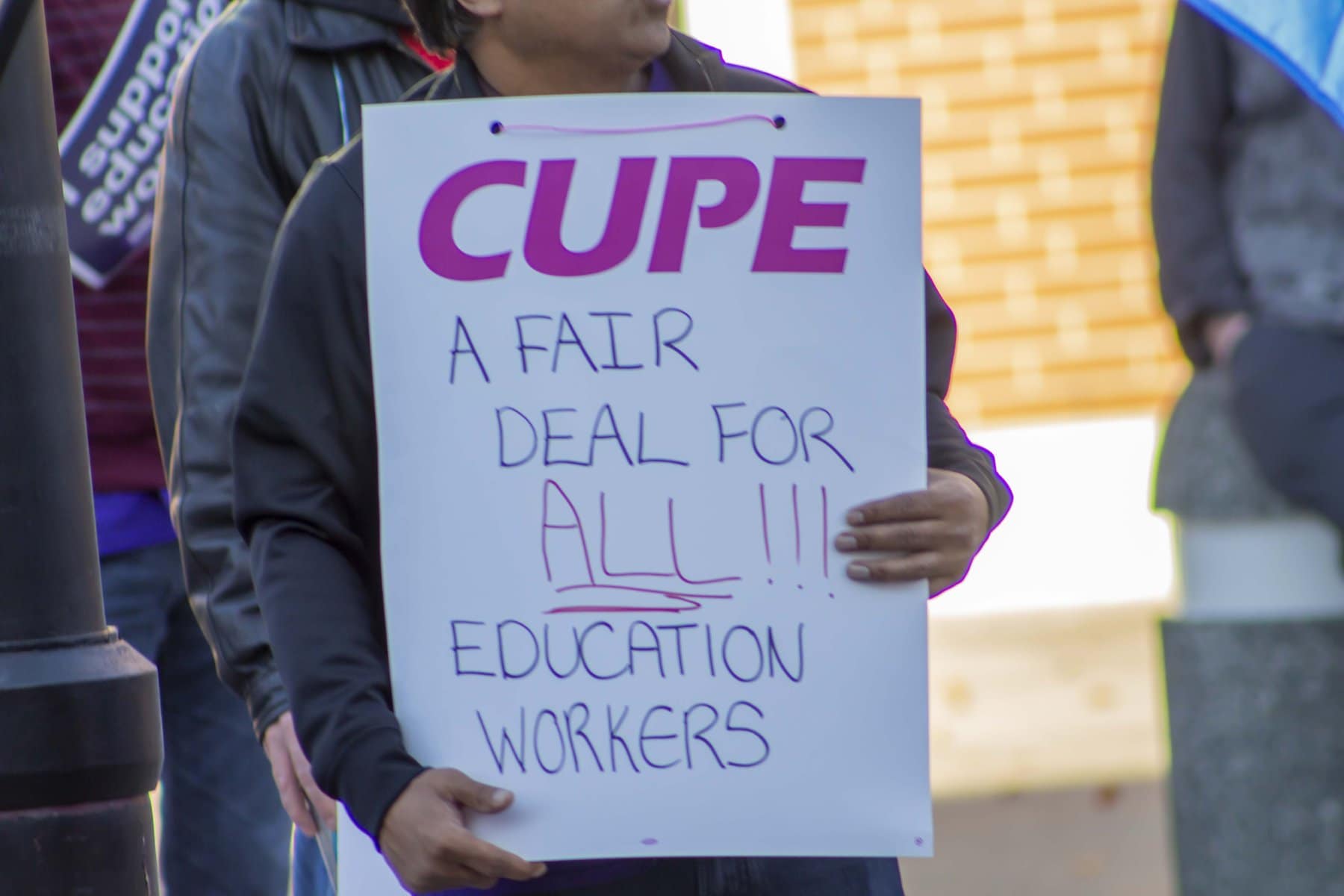 Niagara-on-the-Lake kids spent Friday at home, after a Canadian Union of Public Employees strike forced schools to close doors for the day.

There were no picket lines in Niagara-on-the-Lake, but support staff from schools, including secretaries, custodians, lunchroom workers and educational assistants, were picketing in St. Catharines and Niagara Falls.

The education staff are demanding higher wages from the Ford government — which has not met those demands and on Thursday invoked the Keeping Students in Class Act to stop the strike in its tracks.

But workers say it’s their right as Canadians to be able to fight for a pay increase.

“Our charter rights to strike have been taken away from us,” picket captain Stephanie Burton told The Lake Report at the picket line on Saint Paul Street in St. Catharines.

Burton, an educational assistant employed with the District School Board of Niagara, earns about $34,000 a year and still struggles to make ends meet.

“I work multiple jobs. I live on my own I’m paying rent prices that are astronomical,” Burton said.

The Canadian Union of Public Employees (CUPE) has 55,000 members employed in education across Ontario and it has been locked in contract negotiations with the provincial government since August.

Ahead of the strike, Bill 28, the Keeping Students in Class Act, was passed Thursday morning and invokes the notwithstanding clause to override sections two, seven and 17 of the Charter of Rights and Freedoms which protect the right to strike.

The move was meant to quell the union strike and keep children in classrooms but CUPE staged the walkout anyway.

Nearly 100 people showed up to strike in downtown St. Catharines. People driving by honked their horns in support of the pickets.

Custodian Darlene Johnston told The Lake Report the union is fighting for fairer wages for casual support staff as well.

Johnston explained that casual secretaries come in and work for about $16 an hour, with none of the benefits enjoyed by full time staffers.

For Johnston, “it’s unfair” what the government is doing to silence education workers.

“In one fell swoop, Lecce and Ford took (our rights) away from us,” she said.

“We should be able to negotiate a fair deal.”

In addition to wage increases, the workers are asking for one educational assistant per kindergarten classroom to help support children with independent learning plans.

“We can’t take care of the kids if we are not being taken care of ourselves,” Burton said.

The education workers are being represented by a bargaining committee from the Ontario School Board Council of Unions (OSBCU).

According to CUPE, education workers have seen almost an 11 per cent decrease in pay over the last decade due to legislative restrictions on wage increases.

“It is clear that this government never intended to negotiate,” the bargaining committee said.

They are now striking because the government “would not make the necessary investments” to support education workers.

The District School Board of Niagara has received no new updates from CUPE regarding the strike action, and it is unclear if the kids of NOTL will be back in class on Monday.

The board plans to move to an online model if the strike continues.

Opinion: Take time to consider the candidates and the issues