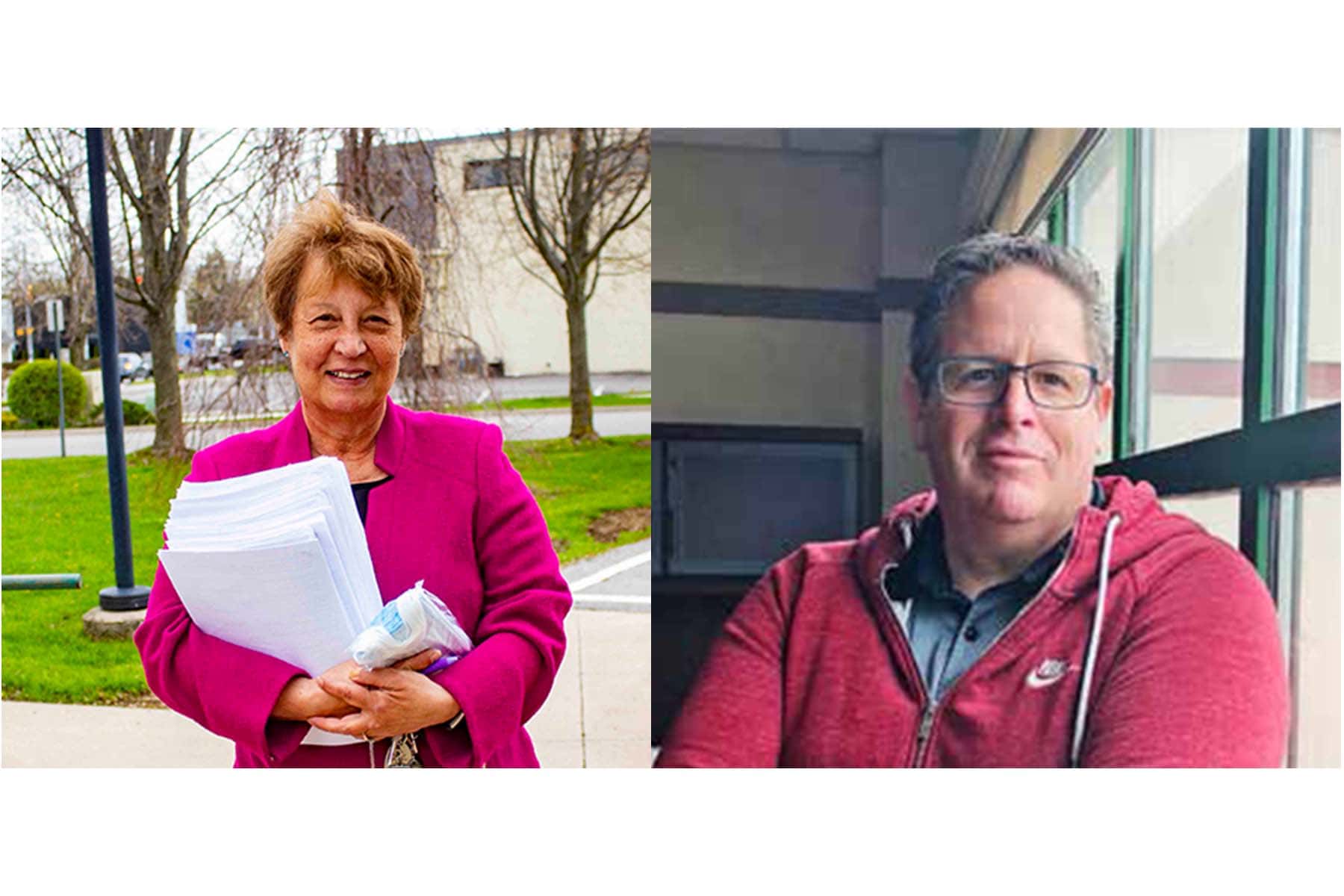 Lord Mayor Betty Disero is vehemently denying statements in a secret recording that allege she was aware of a bylaw complaint lodged by her husband months before she originally admitted to knowing.

The Town of Niagara-on-the-Lake has alerted its integrity commissioner about the recording, made by the mayor’s neighbour Colin Telfer of an Aug. 22 conversation with former senior town administrator Sheldon Randall.

Telfer and his wife Jennifer Elliott are suing the town over losing their B&B licence after a bylaw dispute launched by the mayor’s husband, Dan Williams.

In the conversation, Randall says Disero discussed the matter with him “way, way before” the town’s new chief administrator, Marnie Cluckie, was hired in December 2020.

He also claims the lord mayor spoke to staff about the complaint.

Disero, who told the integrity commissioner in writing that she first learned of the complaint on June 23, 2021, disputed the allegations by Randall, who was interim chief administrator through much of the COVID pandemic.

“He’s wrong,” Disero said in an interview, adding she sticks by what she wrote in her letter to the integrity commissioner.

In a subsequent emailed statement, the lord mayor called the allegations a “smear” campaign in the middle of an election and denied she ever tried to influence the complaint process.

Randall has declined numerous requests for an on-the-record interview with The Lake Report, after repeated attempts to reach him by phone and text.

In an email on Tuesday, Cluckie said she was “unaware of the allegation by any staff members that the lord mayor had spoken to staff specifically about the complaint from Dan Williams” until she heard the audio recording.

“As a courtesy,” Cluckie said, she subsequently “alerted the integrity commissioner that new information had come forward via the litigation.”

In an emailed response to questions from The Lake Report, Cluckie said, “The town received an excerpt of the audio recording (approximately three minutes) through the town’s legal counsel.”

“The town’s lawyer then requested the complete recording and has since received the longer, unedited audio recording (approximately 16 minutes).”

Cluckie said once the review is complete and after the new council is sworn in, the issue will be brought to a closed-session meeting as it concerns a legal matter.

She said it is up to Elliott and Telfer to bring the new information to the integrity commissioner and request that the matter be reopened.

Telfer on Friday sent an informal request by email to integrity commissioner Edward McDermott asking him to reopen the investigation.

In an email response to Telfer, McDermott said the previous complaint is now closed, but “it now appears that you are raising a new complaint, which is an allegation that the lord mayor was not truthful with my office when asserting her lack of knowledge about the Williams bylaw complaint and may have committed the criminal act of perjury.”

“This question is not presently before me as no complaint about such issue has been made to my office in accordance with the town’s complaint protocol.”

“I would also draw your attention to the provisions of the Municipal Act, 2001, which mandate that effective nomination day, all outstanding complaints under the code of conduct are to be terminated and no new complaints can be made during the municipal election period.”

Telfer said he would be submitting a new, formal complaint on Oct. 25, the day after the election.

Any decision to reopen the case after the election period would “be up to the integrity commissioner,” Cluckie said, adding she has advised Telfer that this was an option available to him.

She said outgoing council members were made aware of the new information on Oct. 10.

The story began with a dispute between neighbours and is centred around a $100,000 lawsuit against the town. Disero’s property abuts the Telfer’s property.

The situation led to an investigation of Disero by McDermott, over the complaint against Elliott and Telfer – one it turned out was made by Williams, the mayor’s husband.

Williams, based on a Facebook post by Elliott, filed a complaint about the couple’s large new garage and claimed they were using the building as a living space.

Originally the town refused to name the complainant, citing its privacy policies.

Later the town changed its story and said there had been no complaint at all. Only after Telfer got the Niagara Regional Police involved was it learned that the complaint was made by Williams.

The back and forth has led Elliott and Telfer to feel they’ve been mistreated. They allege the town changing its story could be a result of Disero using her power as mayor to pressure staff to make it look like there was no complaint, to protect her husband.

Disero, in her letter to the integrity commission on Nov. 2, 2021, said she had not talked to any staff about the complaint and that she was unaware of the complaint entirely until June 23, 2021, when she received a call from the town’s lawyer Terry Hill and Cluckie.

In the recording, Randall says, “I know she was talking to staff about it. And she had talked to me about it.”

“I would love the opportunity for the paper or somebody to interview me and say, ‘Did you ever have any discussions with Betty Disero about this?’ And I’m going to say, ‘Of course, I did,’ ” Randall says later.

He also questioned the integrity commissioner’s investigation of the issue, asking, “Why didn’t they check with the CAO at the time?”

Randall was interim CAO prior to Cluckie’s hiring.

In her statement to The Lake Report, she pointed out the initial investigation by the integrity commissioner found no wrongdoing on her part — and that it’s election time.

“Sadly, people get smeared during election campaigns — this is not the first time I have been smeared, although I hope it ends here,” Disero wrote.

“You should examine the motivation of this person making such a claim against me,” she added.

Telfer and Elliott both said politics is not behind their release of the recording to the town’s lawyer on Sept. 28, weeks before a municipal election in which Disero is running.

But outside his business, eSkoot Niagara, Telfer also has had a sign posted that says “ABB” — which Telfer confirmed means “Anyone But Betty.”

And in the full audio recording, Telfer tells Randall, “Hopefully I can cost her the election or get her charged or something.”

Disero’s letter to the integrity commissioner also states the town’s lawyer was “advised by staff that I had not contacted them about the garage.”

The integrity report, which exonerated Disero, noted that retired chief planner Craig Larmour said the mayor “never communicated to him” about the complaint and “there is no evidence of the lord mayor interjecting herself into this matter.”

Disero told The Lake Report she did invite Randall one day to look at her property to inspect a peculiar hole in Elliott and Telfer’s garage — one she suspected was being used to house a video camera pointed at her yard.

Elliott and Telfer said there was never a camera and that the hole was made by a persistent woodpecker.

The hole is still there today. They said they haven’t repaired it because it’s superficial and too high to access, but Disero said she isn’t sure about that and feels like she can’t use part of her yard any more.

Asked why she would have been concerned about a hole at a time when she had no knowledge of the conflict between Telfer and the town, she said, “You never know what people are doing.”

She said the conversation with Randall about the hole predated any knowledge of her husband’s complaint or the lawsuit.

Her story about the hole in the garage lines up with Telfer’s version of events, who also claims to have heard the same story from Randall, as well as with the longer version of the recording in which Randall says, “She still thinks you have a camera pointed at her.”

Disero said she thinks Randall might be recalling that conversation, which she said didn’t involve the complaint.

Gaios victorious on ‘Family Feud Canada’ and head to round two

Letter: Allow Red Cross and UN to fly in supplies for Ukraine