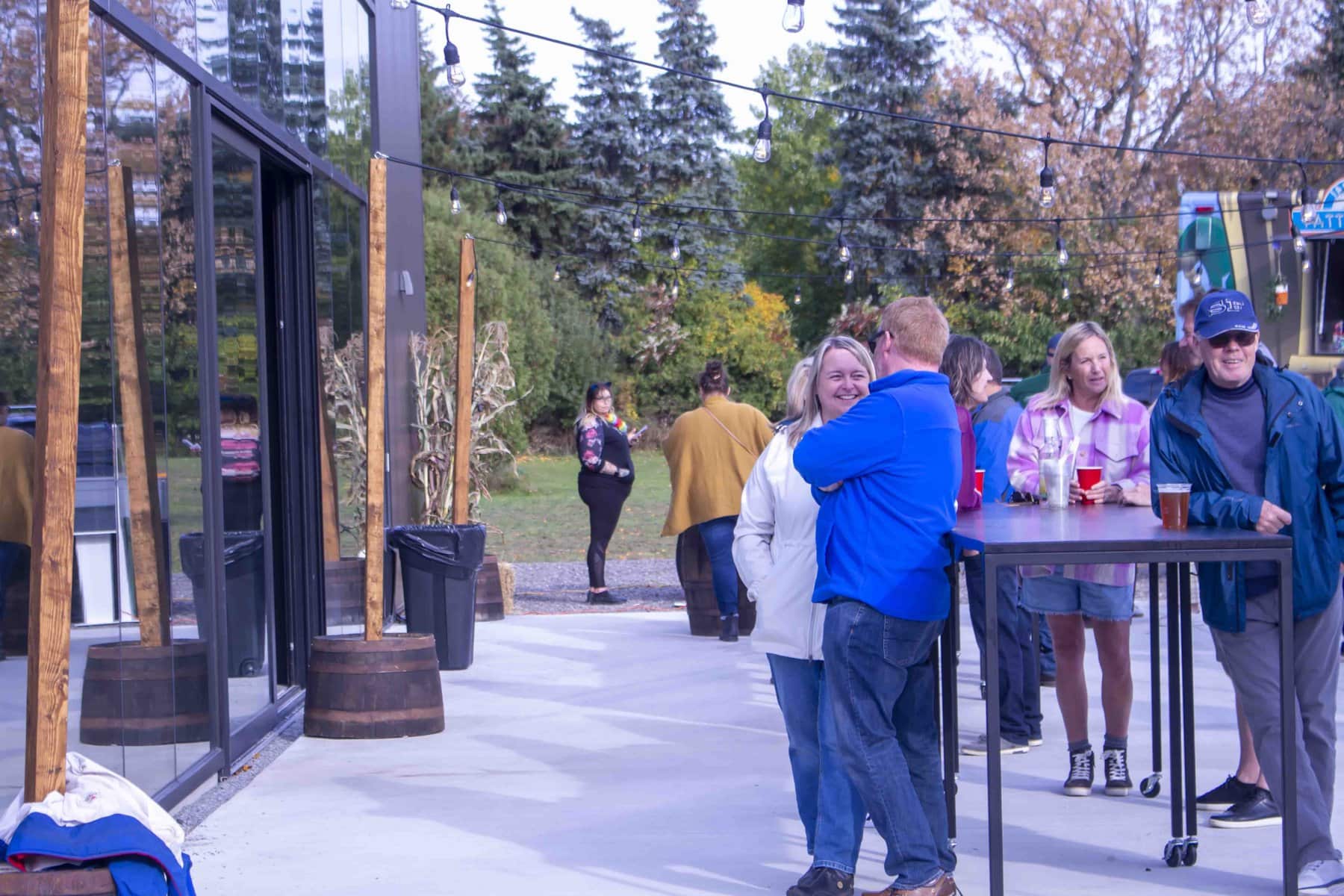 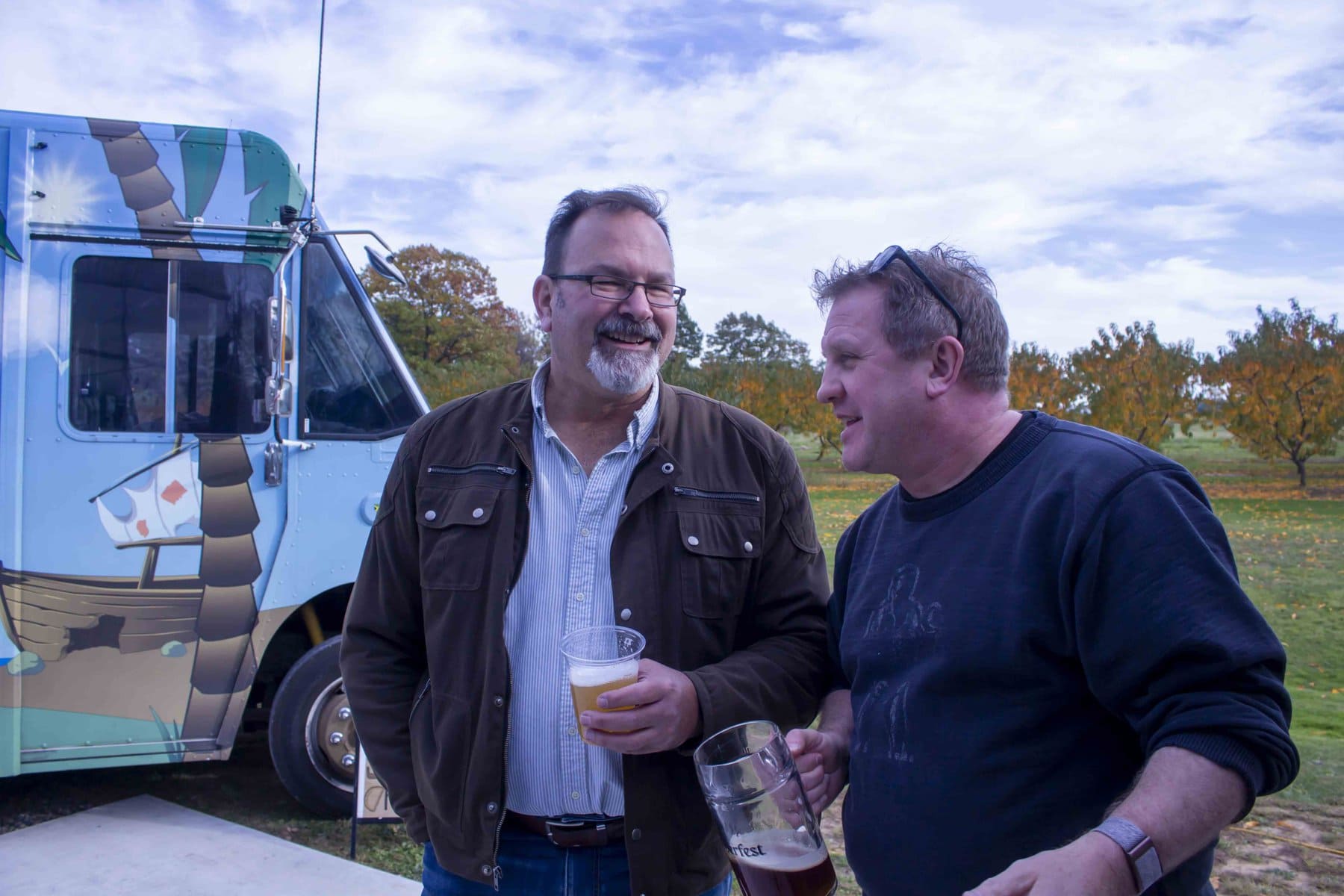 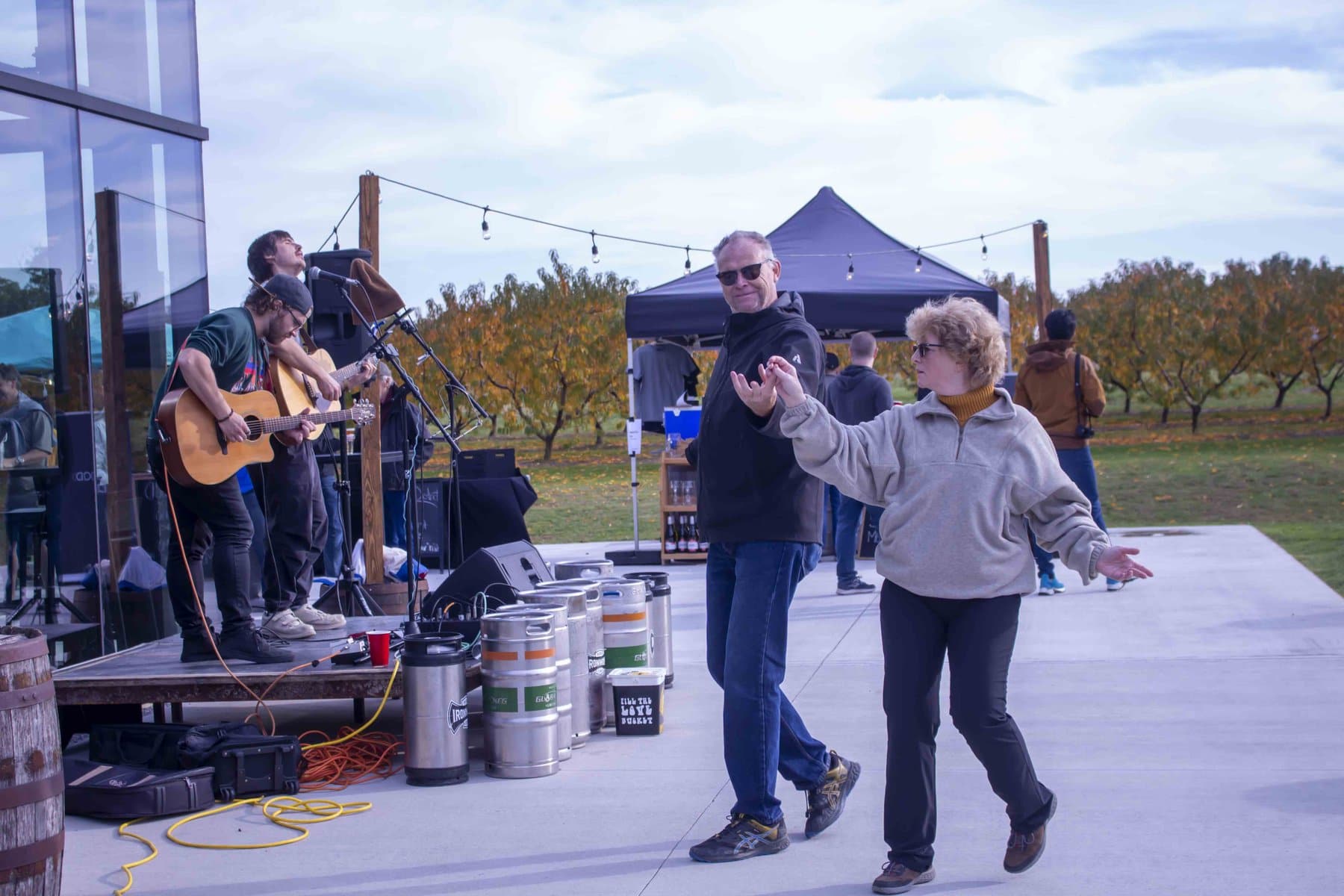 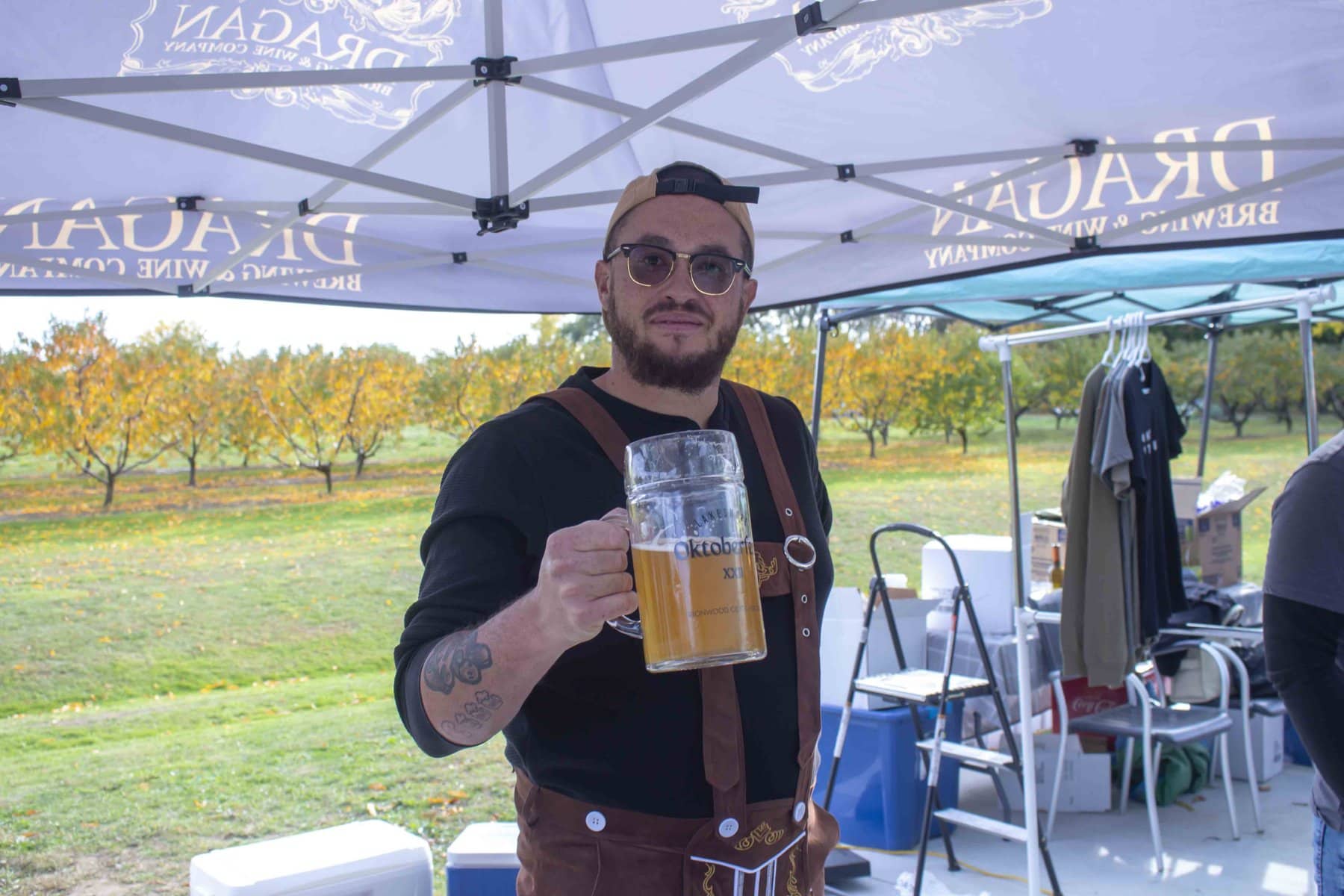 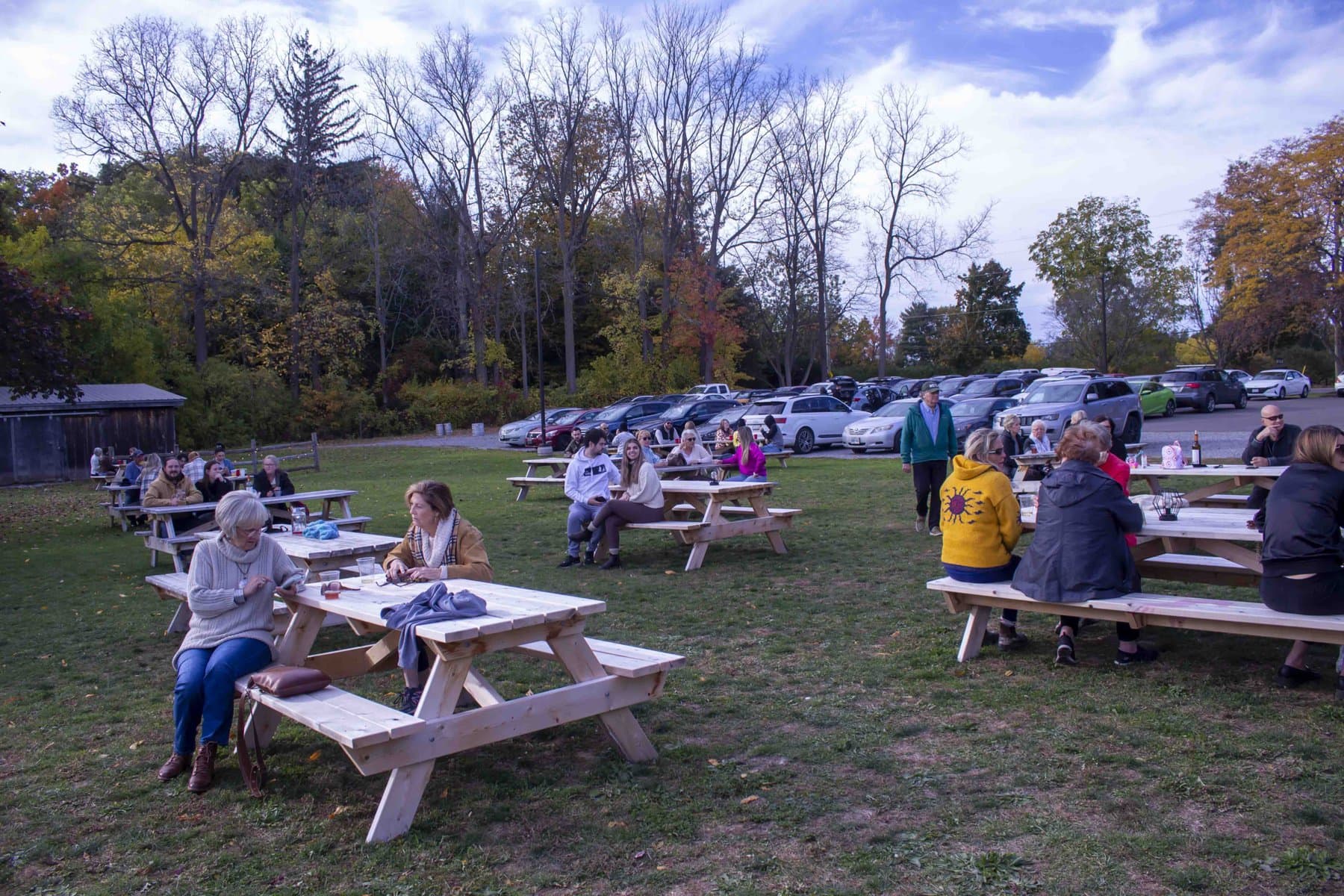 Folks came out to the cider house for Lakeshore Oktoberfest for two days of tasting sparkling cider and foamy beer.

A duo of acoustic guitar players strummed and sang under the cloudy blue sky for a crowd of around 100 people on Sunday.

“Basically, we just wanted to have a fun fall party to do,” Ironwood marketing and event planner Robyn Brown told The Lake Report.

The celebration was put together with Dragon Brewing Company and Palatine Hills Winery, both of which set up tents for the backyard festival.

Ironwood is the new kid on the block, having only been around for a year and Lakeshore Oktoberfest was its first festive event.

“It’s the best day we’ve ever had,” Brown said.

The place was “absolutely packed the entire day” on Saturday, she said.

“Both of our parking lots were at full capacity the whole day,” she added.

Jen Fox and Greg Hodge came all the way from Grimsby to share a moon dance.

The pair of dancers were a pretty picture dipping and twirling to the sounds of Van Morrison.

They’ve been dancing at Social Ease in St. Catharines for 10 years now and look for gatherings with live music all over Niagara to dance at.

Meanwhile, assistant brewer Ryan Dawson was taking a break from his day job as a barista to serve beer at the Dragon Brewing booth.

“I couldn’t be happier with how it’s turned out. I get to make coffee. I love coffee. Get to brew beer on my days off. It’s fantastic,” he said.

Dawson got his start as a brewer during the pandemic and taught himself how to brew with a little help from YouTube.

“Through COVID I probably brewed 100 beers at home. So I learned the ins and outs.” he said.

Children dressed in autumn coats played lawn games on the property as folks sipped boozy beverages at their picnic tables.

Jack Cembalisty and Terence Fowler were near the Dragon Brewing booth drinking from steins large enough to make a norse god blush.

Fowler was enjoying a special batch put together specifically for Oktoberfest.

He and Cembalisty were visiting from St. Catharines, having been directed to Ironwood after visiting Dragon Brewery’s main location in St. Catharines.

Moondancers, beer swiggers and cider sippers revelled away the afternoon.

Brown said Ironwood wants to do something special each season now and hopes to have something ready for winter this year.

Letter: Learned a lot from expert’s viewpoint on ward system

Letter to the editor: Re: Stop spending bad money