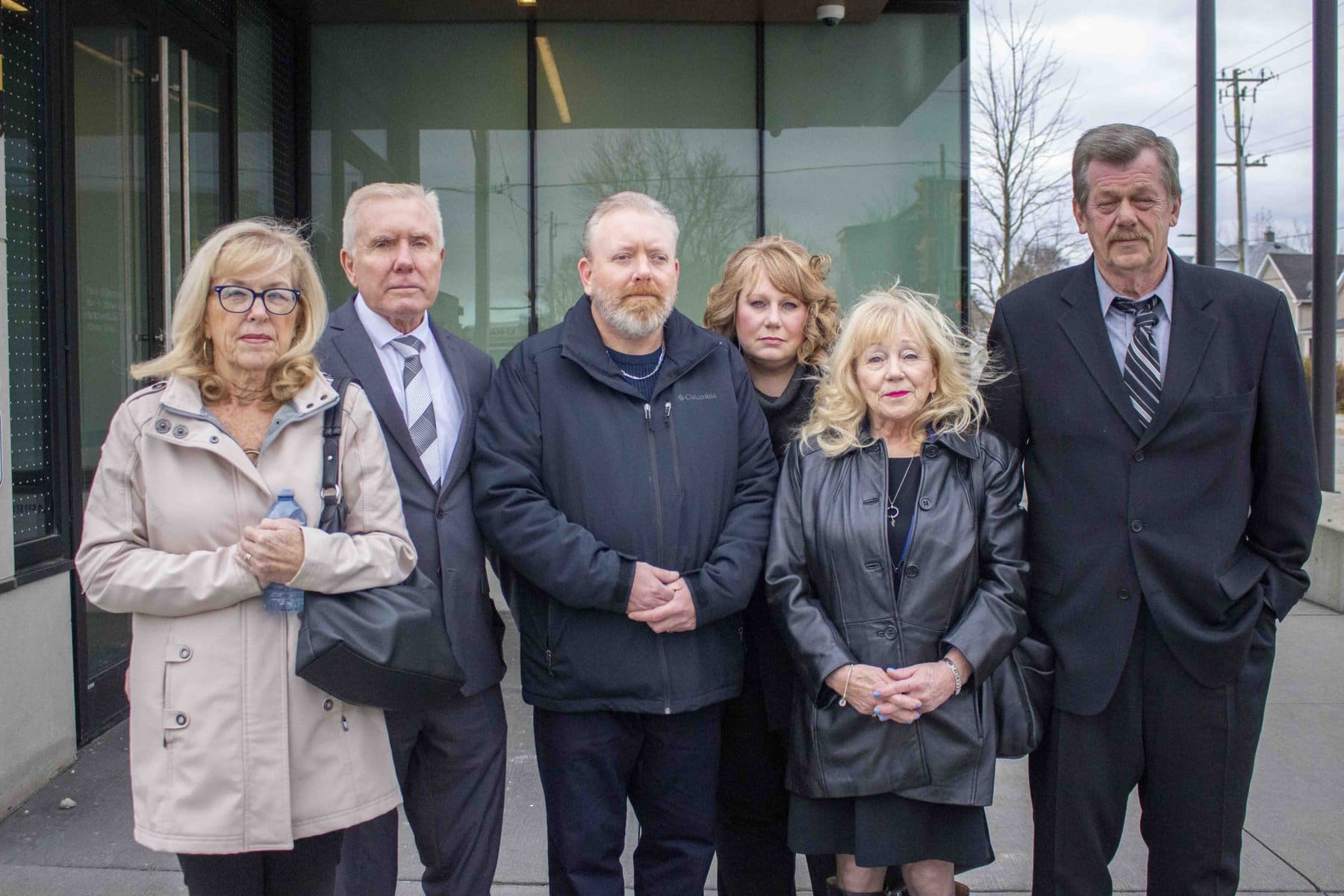 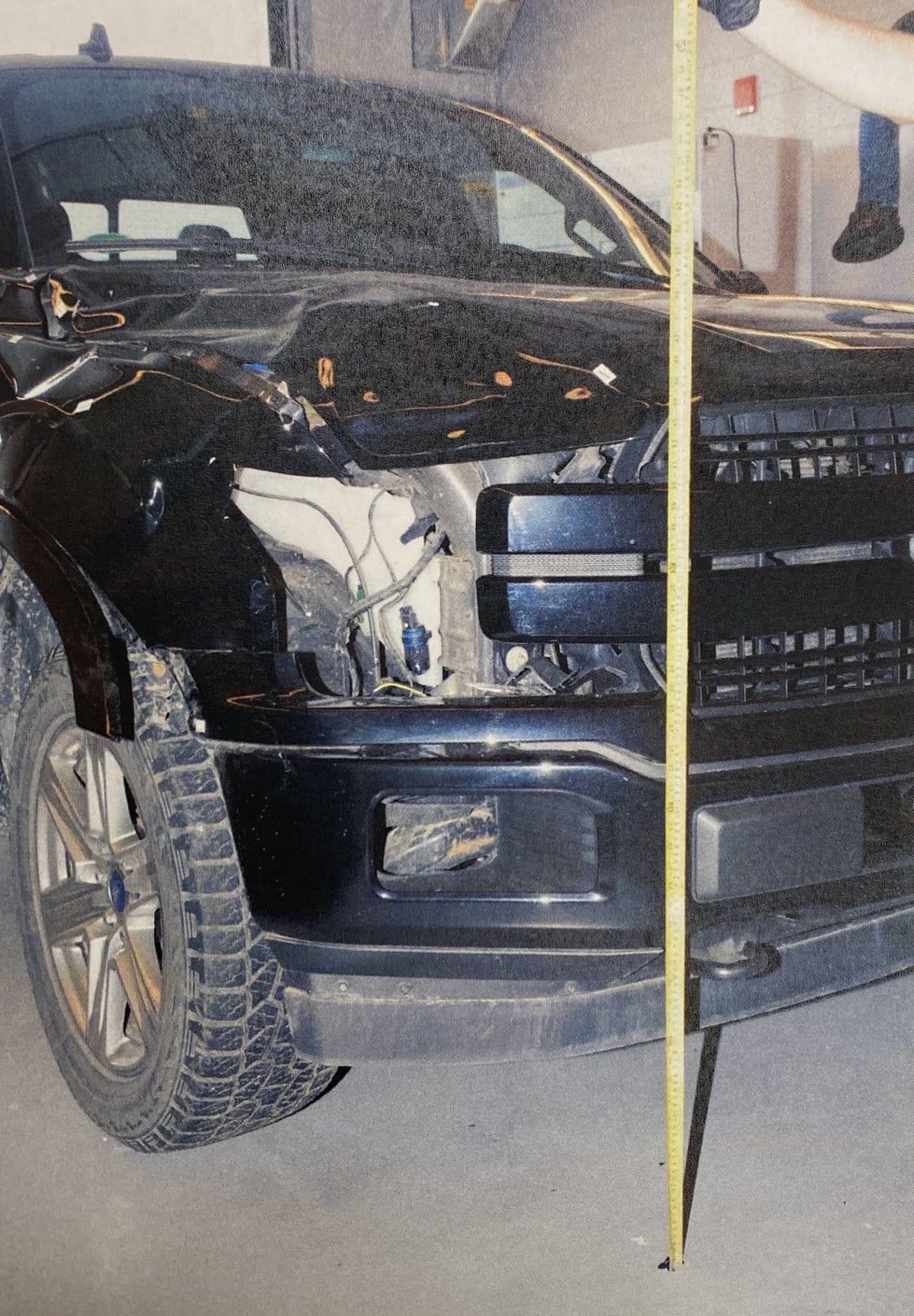 And on the night he was killed, the 40-year-old was walking along Lakeshore Road, headed home to Virgil from St. Catharines. A long trek. He never made it.

Now, as his family’s second Christmas without him approaches, a Santa, snowman and other decorations have been added to the memorial.

Crafted by his stepfather, John Franz, using wood from a pine shelf Wilson himself had built, the cross is emblazoned with a blue heart.

It commemorates the place where Wilson was found by the westbound driver of a recycling truck more than eight hours after he was struck.

On Friday, Dec. 1, a half-dozen sombre family members packed the front row of an otherwise near-empty Welland courtroom to hear the verdict, prepared for any eventuality.

As Justice of the Peace Mary Shelley quietly pronounced Enns guilty of failing to report an accident, the family let out a collective, almost imperceptible, sigh of relief, the tension and sadness dissipated, for the moment at least.

They had been hoping for some vindication and justice for Wilson.

For such a serious matter, failing to report an accident is a relatively minor Provincial Offences Act charge – not a criminal count. But based on the evidence and with no witnesses, it was the only charge Enns faced.

He was not in court that morning to hear the verdict, which caught both the family and Crown prosecutor Henry Limheng by surprise.

Colleen Franz, the petite, soft-spoken mother of the victim, remains angry though she insists she does not hate the man who took her son’s like shortly after 10:30 p.m. on April 4, 2021.

But she does have some questions for Enns:

“Why have you never, ever said you’re sorry?”

“Why did you not come to court to hear the verdict?”

At his trial in October, Enns said he drank a glass of wine earlier in the evening. He also testified he thought he had hit a deer but admitted it also crossed his mind that it could have been a person.

Franz says that had her son got medical attention sooner, he might not have died. She’ll never know.

“He didn’t deserve to be left at the side of the road.”

“As the justice of the peace said, ‘Seconds matter.’ “

“Mr. Enns used his phone flashlight” at the scene to view the damage to his truck and try to determine what he had hit.

“He could have dialled 911. An Ornge air ambulance could have taken Matthew to an out-of-town trauma centre,” Franz says.

Enns made that call just after 8:08 the next morning, when he realized the damage to his truck was extensive and when he heard police had closed Lakeshore to investigate a fatality.

A few years before he was killed, he developed a blood clot in his right leg – a hereditary condition that was treated successfully but the doctor advised him to walk more. So, he did. A lot.

The night he died, his mother met up with him in St. Catharines. COVID was raging and Wilson had been laid off from his job as a bar back at Fallsview Casino.

He and his mom were going to go to Starbucks for coffee but instead they just talked. “I was with him till 9:01 that night,” she says.

Because Franz was driving, she urged Wilson to let her take him home, but, “He said he was going to talk with a girl.”

“I’ll just walk,” he said. Back to the Homestead area of Virgil, about six kilometres from where he took his last steps.

Barely 90 minutes after he and his mom said goodbye, he was laying in the shallow ditch on Lakeshore Road. And no one knew.

She prepared a lengthy victim impact statement but did not read it in court because Enns was not there to hear it. She’d spent months writing and revising it.

Feelings of anger and bitterness remain. And lots of questions.

“It hits me every day,” she says. “There are certain things I don’t want to do any more. Certain places I don’t go to in Niagara-on-the-Lake any more because they remind me …”

“Basically, I sit in my house.”

She’s had counselling and been befriended by two other mothers who lost sons. “They have been an immense help to me.”

“Losing a child is the worst thing that can happen to a parent,” she says. “I don’t know how to get over it. It still haunts me every day.”

The circumstances of Wilson’s final hours traumatize her still.

A few days before her son died, Franz says, a dog smacked into her car.

The dog weighed about 40 pounds, less than a quarter of what her adult son weighed.

“I felt that impact unbelievably. It made a huge noise and I stopped immediately. I got out of the car.”

She says the owner was nearby and told Franz, “I saw the whole thing. The dog ran into you.”

Franz was shaken and wanted to cover the vet bill, but the owner refused.

Fortunately, the dog was fine.

“I wanted to do everything I could for the dog. That person didn’t do the best that he could for my son.”

“It still hurts every day,” she says. “Matthew didn’t deserve to die.”

While living with the loss of her son remains a heavy burden, she lauds the work done by the police and the prosecutor.

She says Limheng, an assistant Crown attorney, and lead investigator Det.-Const. Ryan Dool were both “outstanding.” So was Annie English of the police department’s victims assistance program.

“I have heard so much through the years against the police. I think that the police in this case went over and above the call of duty,” she says.

“It’s our justice system that’s failing us and failing a lot of other people out there, too. Unfortunately, it’s not geared more towards victims, which is sad.”

The maximum fine for failing to report an accident is $1,000. The $500 fine levied in the death of her son strikes many people as unfair. Enns also received nine months probation.

In Franz’s experience, “the system is too lax, too lenient” and diminishes the rights of victims.

“Mr. Enns, I don’t know whether he has any feelings of remorse or regret or sorrow other than for himself. And that bothers me.”

Her son’s friends have been a comfort. She says she received 300 to 400 calls, notes and messages speaking highly of Wilson.

“They’ve all had such wonderful things to say about him and things that he did for them.”

It helps her to know that other people cared for Wilson.

And on the first Mother’s Day after his death, the family got together and carried the small black cross down to Lakeshore Road, where John Franz pounded it into the ground with help from her grandson Zachary.

“We all said a prayer and then we went to Matthew’s grave” in Lundy’s Lane cemetery where he’s buried with her parents and other relatives.

He died while walking eastward toward NOTL along the unlit south shoulder of Lakeshore Road.

In piecing together the case, Niagara Regional Police investigators obtained a dark, grainy, black and white surveillance video from a security camera at Seaway Farms, at Stewart and Lakeshore roads.

It was played in court at Enns’ trial in October.

In the video, for a few seconds around 10:26 p.m., Wilson can be seen walking eastward along Lakeshore.

Enns testified that he circled back and stopped, using the flashlight from his mobile phone to look around and to inspect the damage to his truck. Some of this was captured on the Seaway Farms video.

In the pitch dark, with his phone flashlight, he thought he had some broken lights and other minor damage, Enns said.

Enns then drove to his home, about 1.5 kilometres away, on Irvine Road.

Matthew Wilson’s body was discovered in the shallow, south side ditch by the driver of a recycling truck headed toward St. Catharines about 7:20 the next morning.