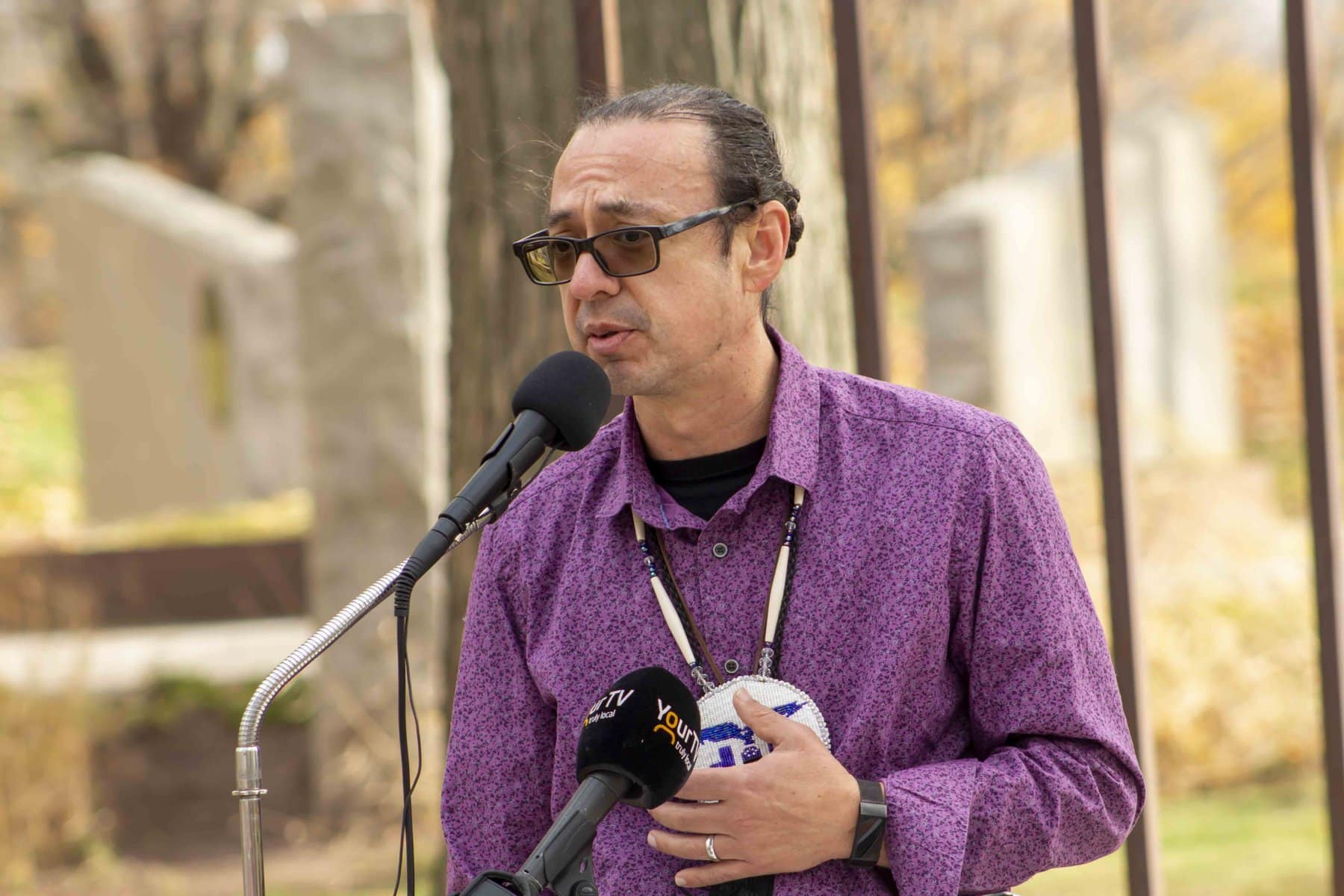 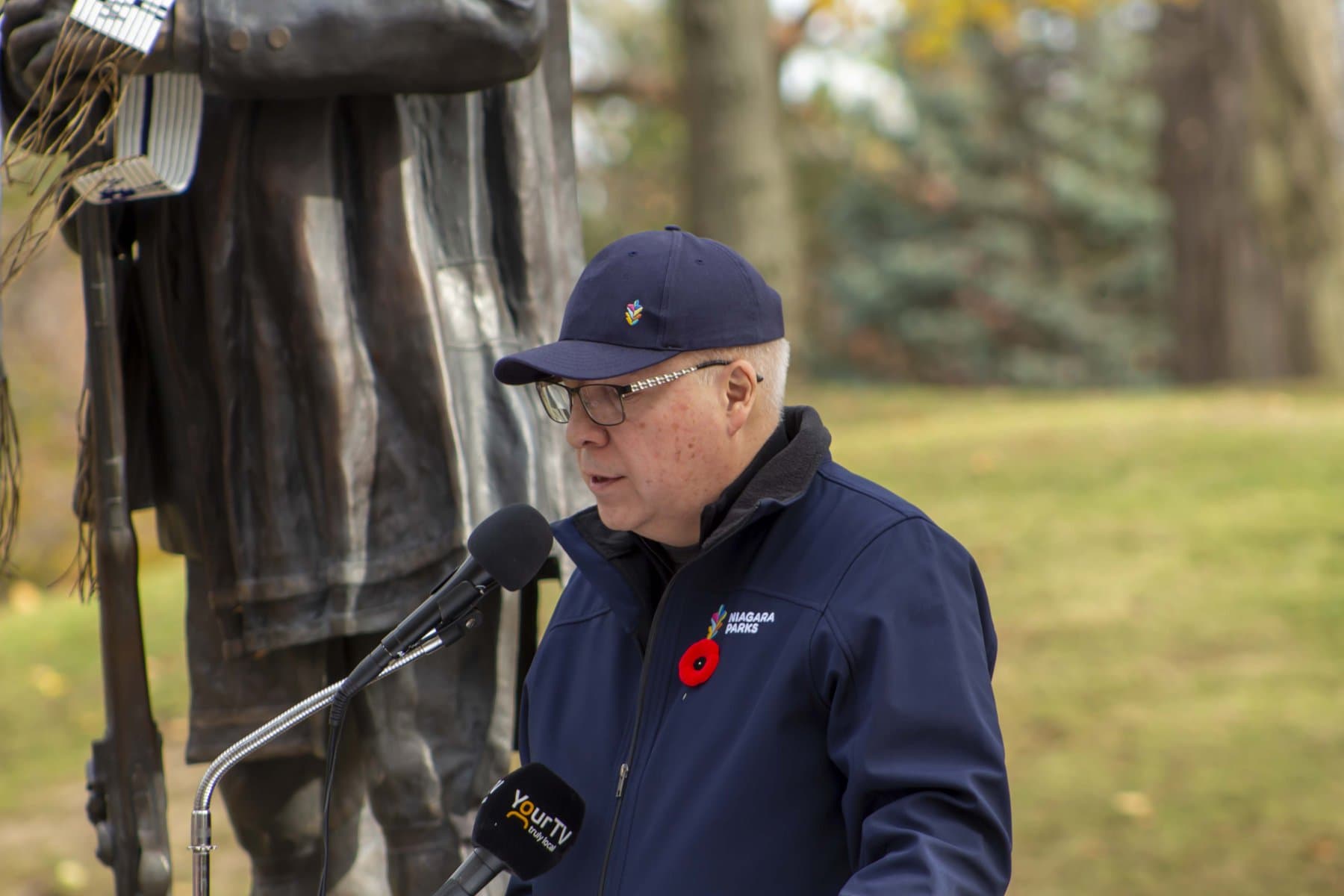 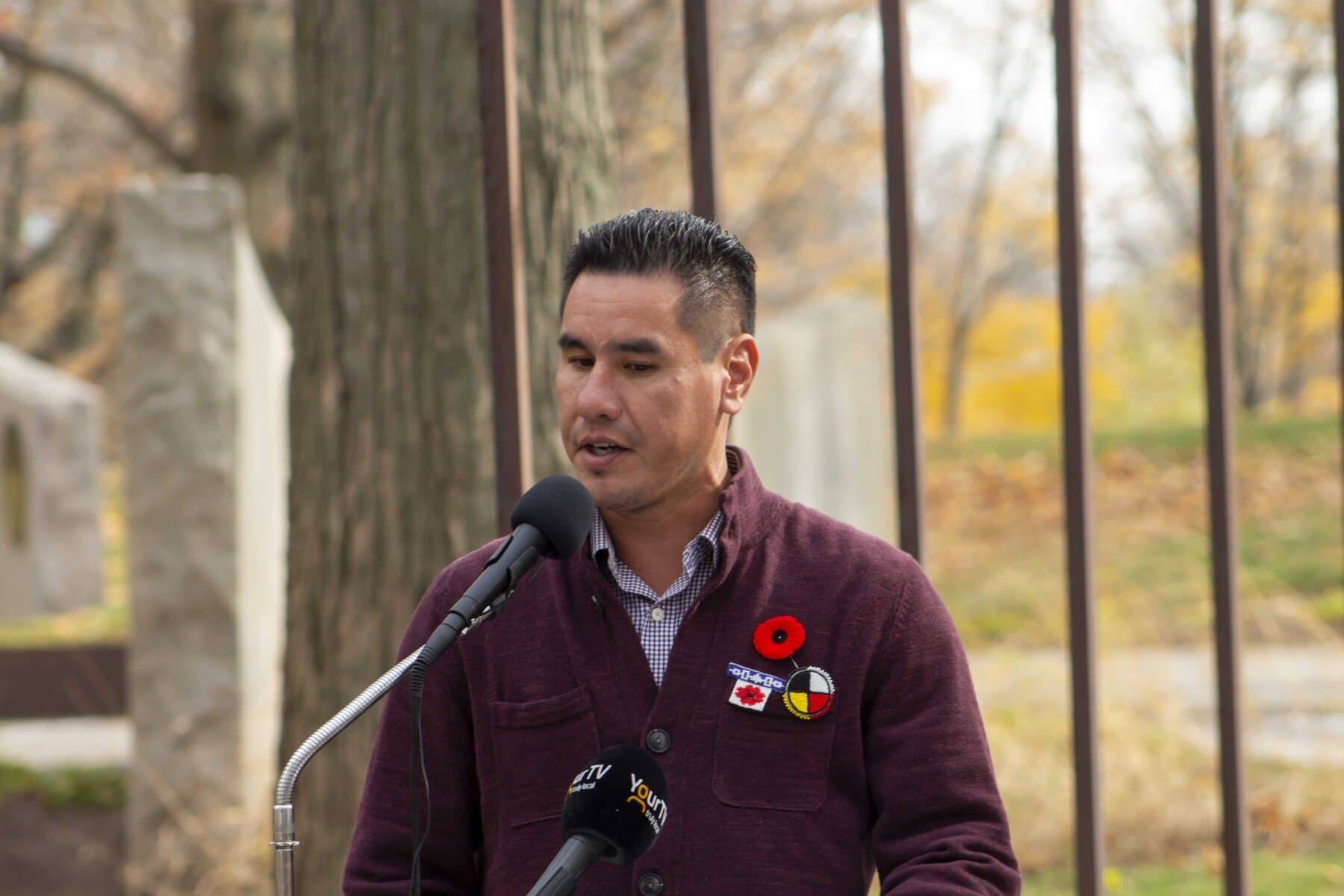 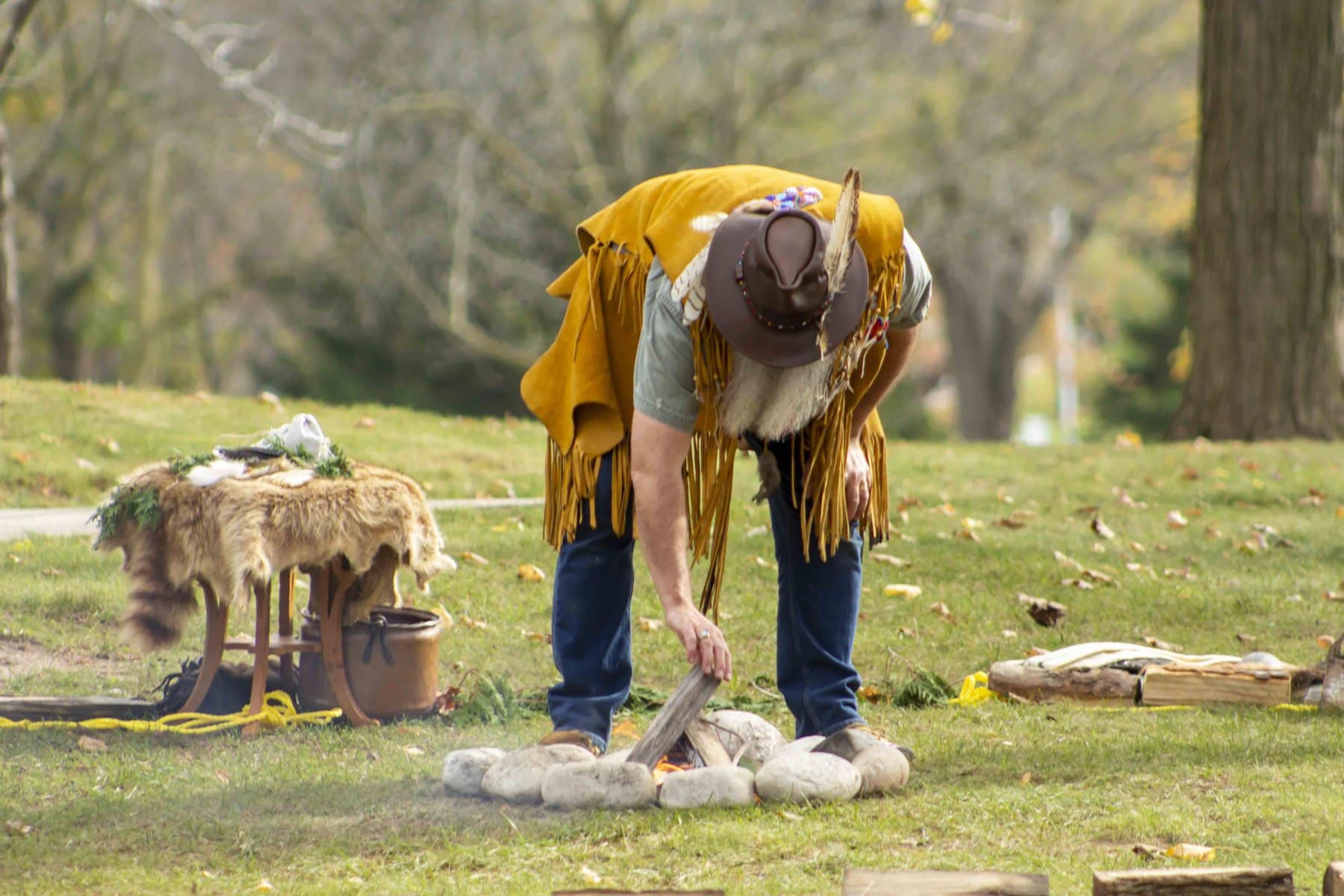 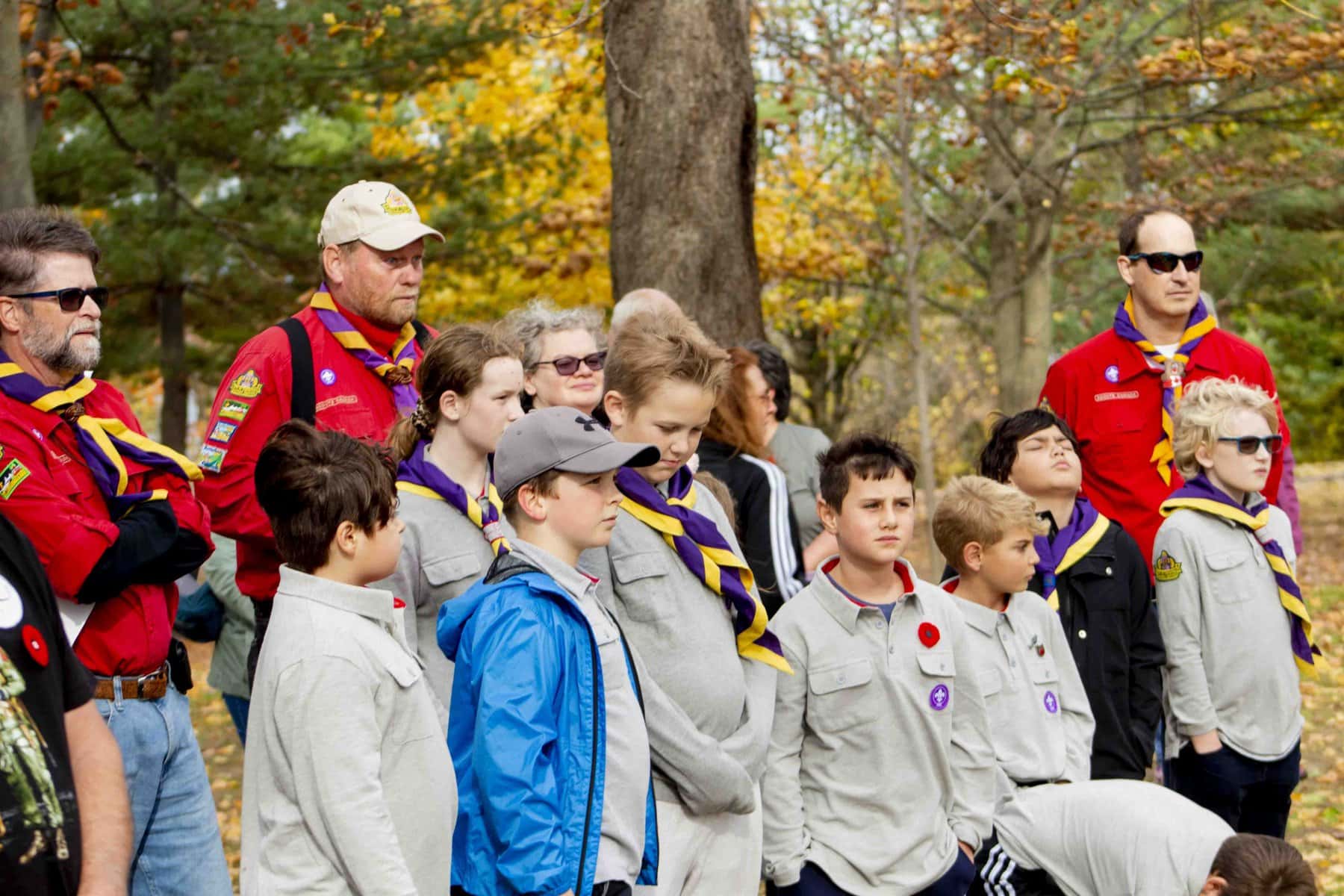 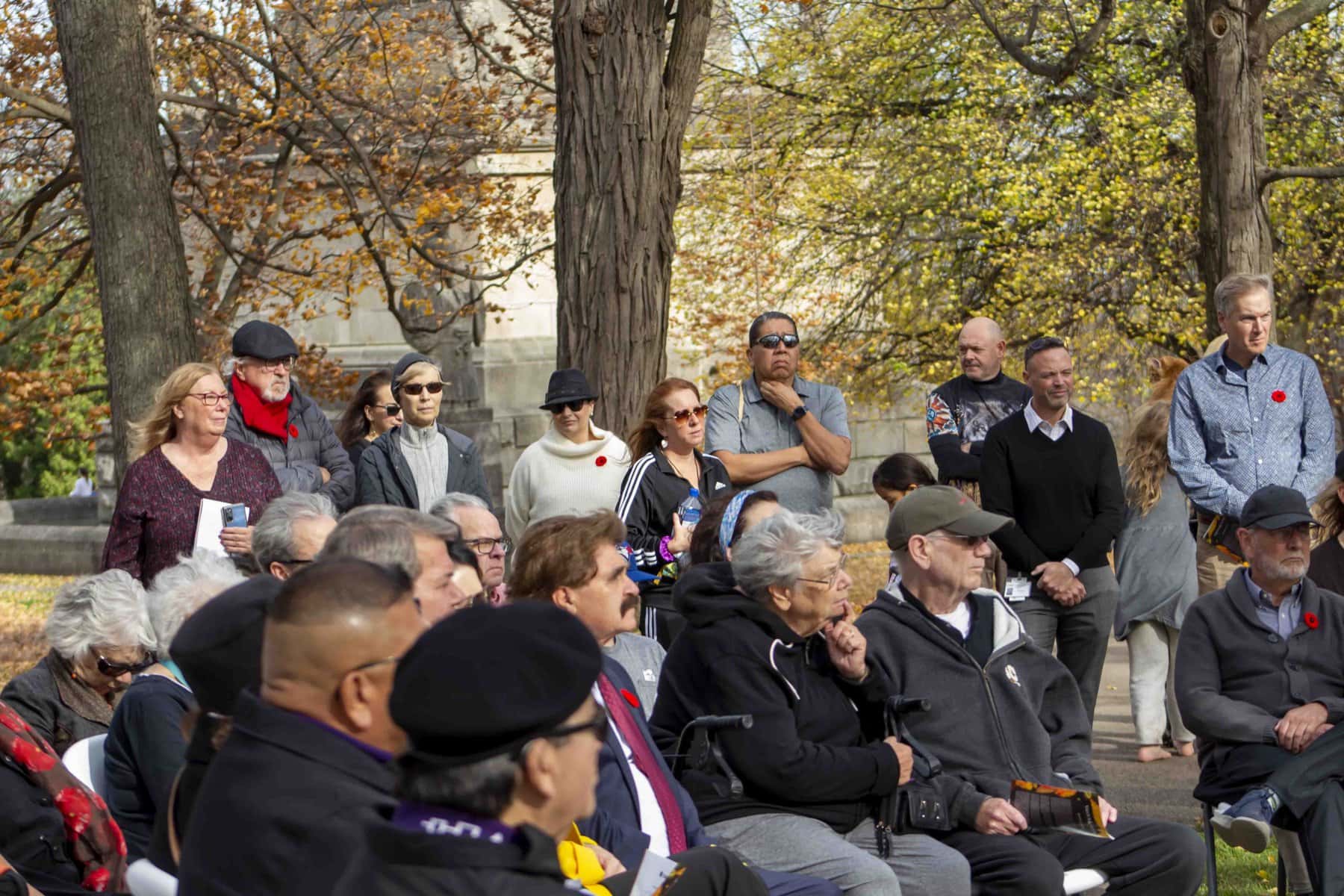 The mood was sombre but the wind was restless. It carried with it the smell of tobacco and smoke from a sacred fire burning nearby.

It was also the fourth year the people of Niagara reflected in silence for the Valour and Victory ceremony at the Landscape of Nations monument in Queenston Heights.

The monument was built in 2016 to recognize and memorialize the contributions of Indigenous soldiers throughout Canadian history, but placing special emphasis on their contributions at the Battle of Queenston Heights.

“As the son of an Indigenous veteran – My dad served in the Vietnam war – it’s really touching to me to know that his sacrifice and the sacrifice of people like him is acknowledged,” said Karl Dockstader, executive director of the Niagara Regional Native Centre.

Dockstader said his father never talked much about his experience at war.

“He wasn’t able to when we were young,” adding that he talks more openly now, especially with Karl’s own children.

Dockstader gave a traditional greeting at the ceremony.

The significance of the greeting, he said, was to teach that “we have a responsibility to align our consciousness – our consciences – for the collective good.”

Richard Merritt, one of the co-chairs for the Landscape of Nations, gave the historical address for this year’s memorial.

The battle of Queenston Heights took place Oct. 15 and claimed the lives of 28 soldiers, Canadian, British and Six Nations alike.

Maj.-Gen. Isaac Brock was among the dead.

John Norton (Teyoninhokarawen) and John Brant (Ahyouwa’ehs), the son of Joseph Brant, played an instrumental role in the battle when they and nearly 80 Haudenosaunee and Delaware warriors arrived to hold off the American advance.

Norton and Brant are depicted in statues at the Landscape of Nations monument.

While “the Indigenous chiefs and warriors had for years fought bravely” alongside their British and Canadian allies, Merritt said it would be a mistake to think of the colonialists and Indigenous as separate, homogenous groups.

The truth, he said, was there was a lot of co-mingling between the two groups, and that even Norton and John Brant, came from multi-ethnic families.

The Landscape of Nations was built as part of the Niagara Parks Commission’s commitment to Truth and Reconciliation.

“(The monument) is important in revealing the missing pages of history that provide powerful lessons for all peoples within Canada,” Tim Johnson told the crowd in a speech.

Johnson acts as a senior adviser in heritage, legacy and Indigenous education for Niagara Parks. He has been active in the procurement of the monument since day one and has spoken of its symbolic meaning in previous years.

This year he chose to talk mostly about his family’s military service.

His father served 18 months in Germany as a radio operator during the Second World War and his great-grandfather was a sapper (private) in the First World War.

“Here, on this hallowed ground, I’m gratified to be able to honour and recognize my ancestors. My father, my great-grandfather, and all those through my family lineage,” Johnson said.

The gathering was honoured by the presence of two Indigenous veterans, Brian Williams and Howard Hill, who served in the U.S. marines and airforce respectively.

Gary Parker was invited to sing an honour song for the Victory and Valour memorial service.

Parker chose a victory song for the soldiers who came home from war, describing it as “a lot of pain and suffering for families to go through.”

”It’s an honour to have them back home with us regardless,” he said. “That’s a victory.”

Parker has a long military lineage.

His father, grandfather and uncles all served in the military but Parker’s dad felt his son was on a different road.

“He knew I was going down a path of culture,” Parker explained, adding that he works hard to preserve the knowledge and customs of his community.

In his community, Parker is not just a drummer and singer, but is also a knowledge keeper. He works as an Indigenous education adviser all across Ontario, and now sits on the Niagara College Indigenous Education Management Circle.

A group of Scouts Canada Cubs were at the park to pay their respects as well.

The 57th St. Catharines troop was there to learn about the contribution of Indigenous soldiers at the Battle of Queenston Heights.

The group does something a little different every year for Remembrance Day.

“It’s important to show the boys and the girls that we can never forget,” Andrew Zacharuk, one of their leaders, told The Lake Report in an interview.

Zacharuk was there with his five children and a newborn grandchild. Scouts Canada has been an important part of his life for 20 years.

“Family is important.” he said.

Zacharuk continues to volunteer with Scouts Canada because he’s amazed by the growth in leadership skills and personal character in the children who go through the program.

Letter: Why delays in getting a booster?

OPINION: No, Niagara Falls is not getting a Harry Potter theme park