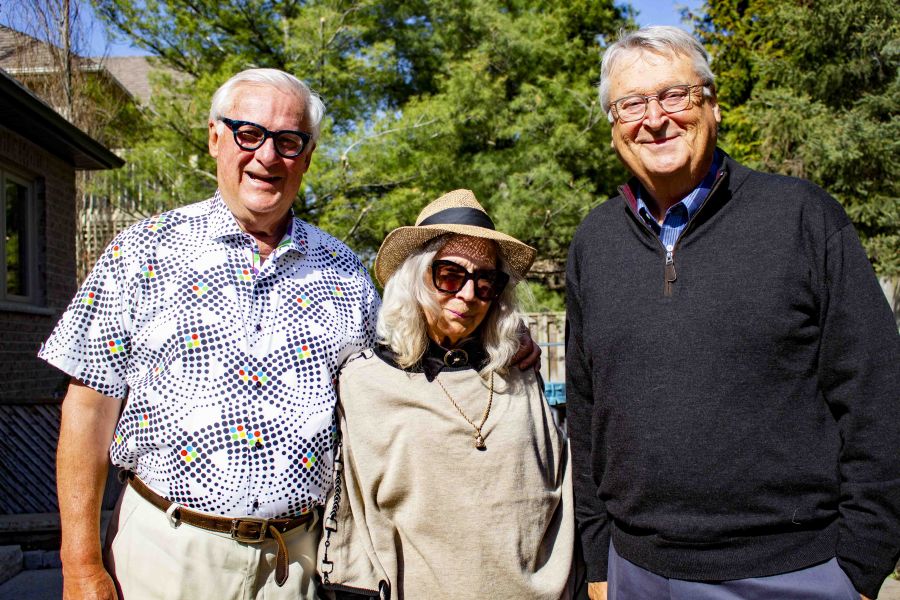 An intimate party last Tuesday was the setting for not one, not two, but three 75th birthday celebrations.

“You know, when you get to this age, you prefer to forget your birthdays, not to remember them,” host of the party and septuagenarian Murray Weaver said with a laugh as he doled out beverages and appetizers to friends and family.

Weaver was celebrating his 75th along with lifelong friend Gina Scarlett and Dr. Greg DeCinque. All three were born on May 10, 1947.

Scarlett and Weaver were even born in the same hospital, Hamilton General, mere hours apart. But their connection stretches back before even their respective births.

Scarlett fondly remembered her friendship with Weaver in their youth. Though they do not see each other frequently these days, the memories of childhood can often be the strongest.

Both of their families had cottages on Boshkung Lake in the Haliburton Highlands.

“When I was like 14, when I was allowed to go to his cottage around the bay by myself, they had a cabin with two bunk beds in it and we would stretch out on the top bunk and read comics by the hour,” she reminisced.

“That’s what I hope they were doing,” her husband John jokingly chimed in.

Having the same birthday and mothers who were best friends often put some undue pressure on Weaver when their birthday came around.

“Growing up, Gina would always call me to wish me a happy birthday first. My mother always said, ‘This time, you’re going to call Gina first,’ ” Weaver said.

“Oh no, did I blow your cover?” Scarlett interrupted as Weaver recounted the tale.

“So I pick up the phone and, of course, Gina said, ‘Murray, it’s Gina. I just wanted to call and wish you a happy birthday and stuff like that.’ And I’m like, ‘Ya, ya. Thanks Gina,’ ” said Weaver.

“My mother immediately turns on me and goes, ‘You didn’t call her!’ ” Weaver laughs as he finishes the story.

Weaver met DeCinque by chance in Ellicottville more than 20 years ago.

“We were sitting there in March, April, lunch for a bunch of people and someone said to me, ‘Hey, don’t you have a birthday coming up?’ ” Weaver said.

DeCinque’s memory of the meeting was slightly different. As he recalls, the two bonded over a mutual love of cigars.

He has been visiting Niagara for many years as he used to store a boat at Point Abino out by Crystal Beach, he said.

He drove over the border the night before the party and stayed in Niagara-on-the-Lake to be close to the birthday festivities.

DeCinque is sharp as ever at 75 and couldn’t help but tell a few jokes at the party.

“Remember the old Carl Reiner line? They asked him about turning 90 years old and he said, ‘Well, life is pretty simple. I get up in the morning and I look at the newspaper and turn to the obituary column,’ ” DeCinque said.

“And if my name’s not there I go and have a cup of coffee.”

The event was special as, despite having the same birthday, the trio had never celebrated together before, Weaver said.

In fact, DeCinque had never met Scarlett until she showed up in NOTL on Tuesday.

He had one more joke up his sleeve.

“There was this legendary jazz musician. Finally, when he is in his 90s, he gets a show on Broadway. So, someone’s interviewing him and they say, ‘You're 90 years old. Is there anything in life you wish you’d done differently?’ ” DeCinque said.

“He says, ‘If I had known I’d live this long I would have taken better care of myself.’ ”

Magdalena Titian – falling in love with NOTL through watercolour paintings

HOLD — DO NOT PUBLISH –Exploring photos: