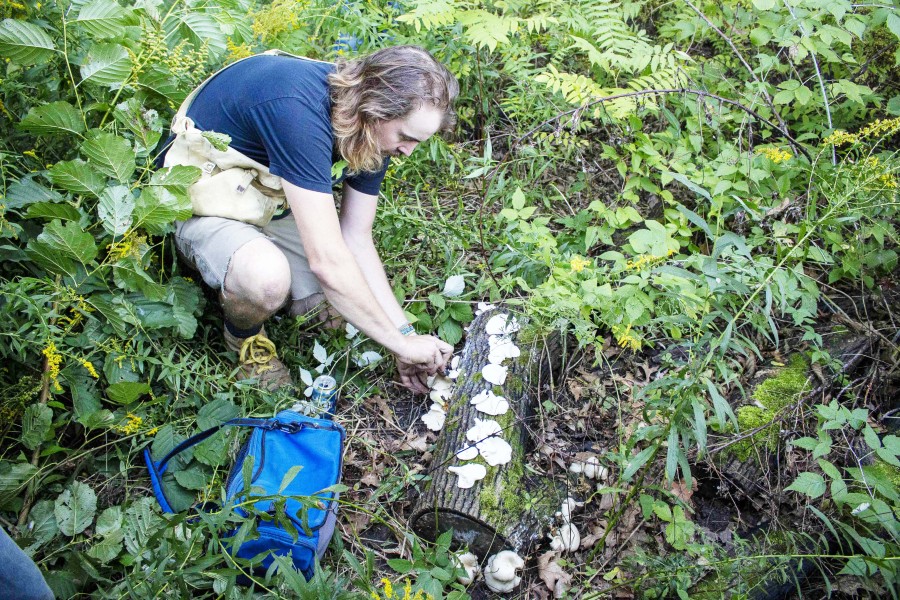 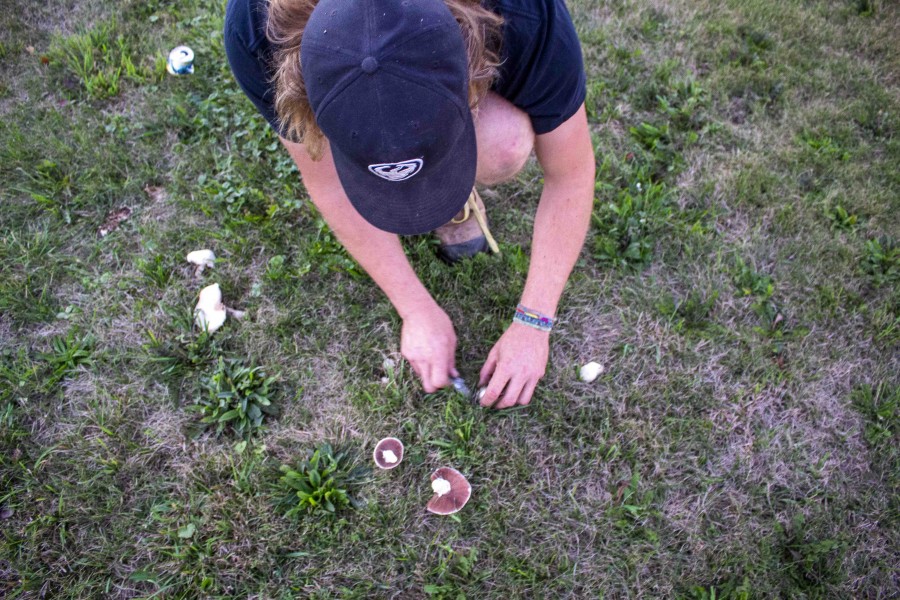 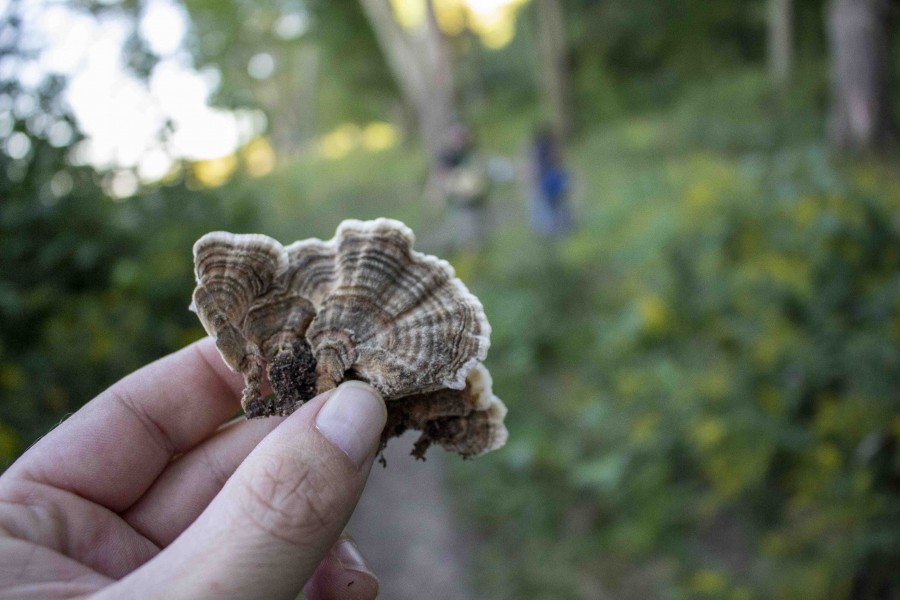 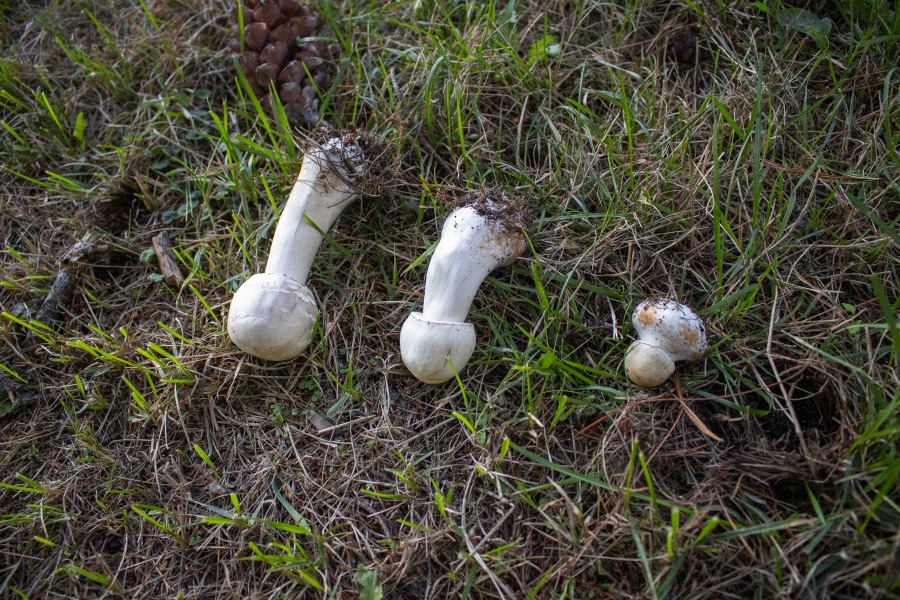 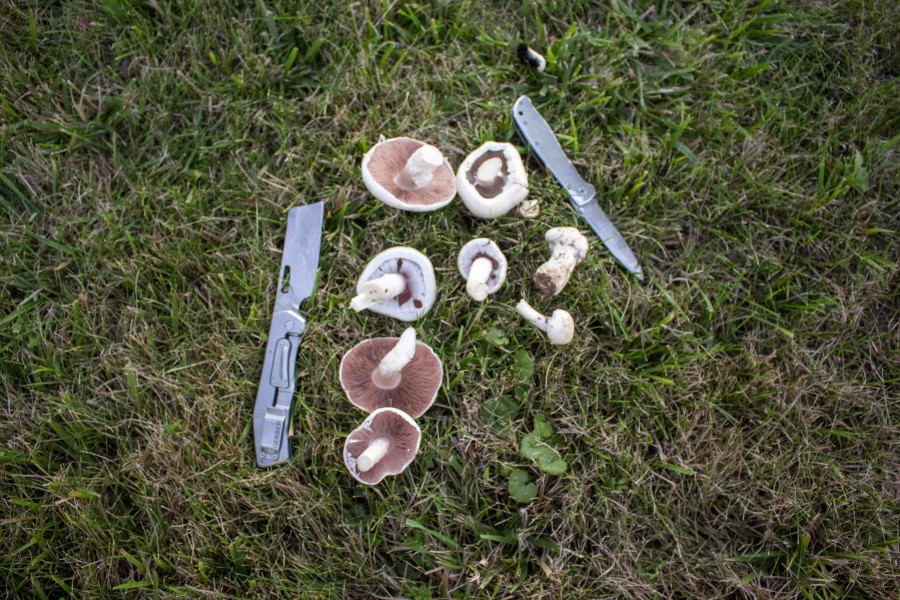 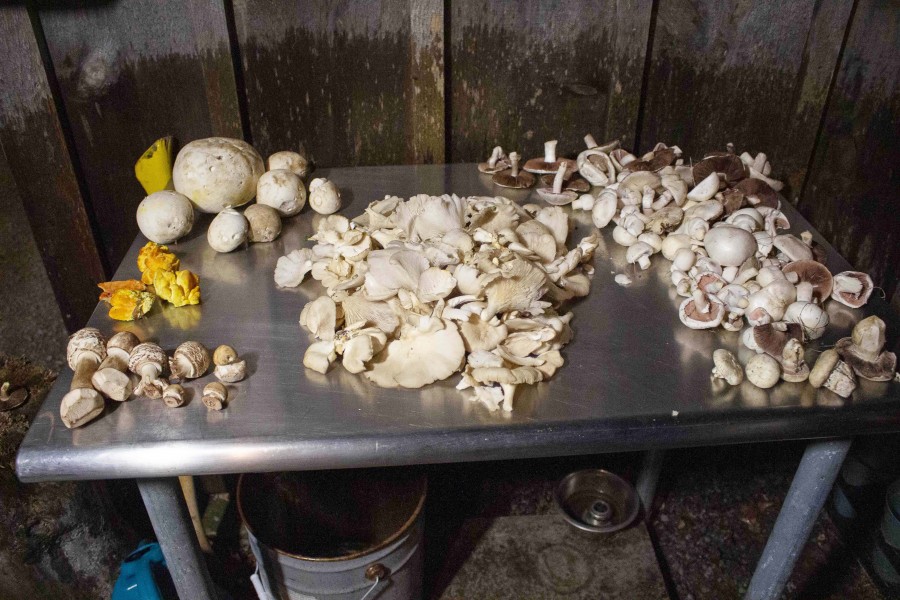 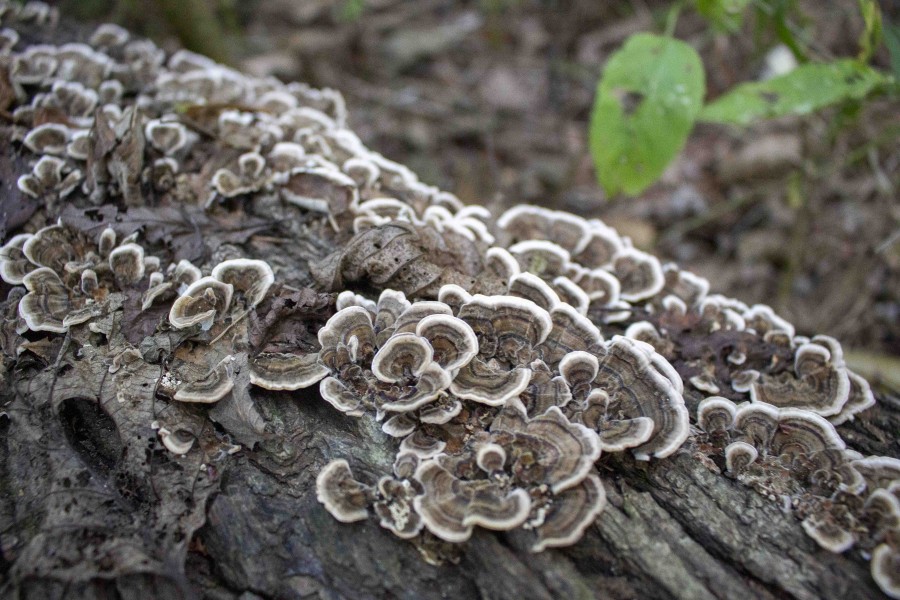 See a short documentary on Ball and Brant here: www.youtube.com/watch?v=R8jckaCg0Js

You want to cook them well, and know what you’re cooking.

That’s some expert advice from two avid mushroom foragers who spend their days hunting all across Niagara-on-the-Lake and beyond for tasty, edible fungi.

It’s a sport Andrew Ball and Levi Brant have been honing for about seven years.

Ball, a lifelong NOTL resident, started foraging early in life with his father Terry. But it was nothing like what he and Brant do today.

Back then, Ball and his dad would search primarily for field mushrooms like shaggy manes and agaricus campestris — mushrooms that are sort of similar to your supermarket mushrooms in look and flavour, explains Ball.

For the two longtime friends, spotting mushrooms has become a sort of second nature. Following them around while they hunt, they’re constantly finding flushes. They scope out potential scores from impressive distances and often they can simply spot them from the road while cruising in Ball’s truck.

It’s a matter of having an experienced eye, they explain.

“Our eyes are trained for looking for different things. Not everyone’s looking for the same thing,” Brant says. Once you know what you’re looking at, “you see things people don’t see.”

Brant’s first time mushroom foraging was with Ball. Until then, he didn’t even like the taste of mushrooms.

“The first time I ever went mushroom picking actually was with Andrew, and we picked shaggy manes, which have like little hairs on them, and then we picked some other field mushrooms,” he says.

“We picked those and brought them back, and I had always said, ‘Man, if you want to go pick mushrooms cool, but I can’t stand them.’ ”

But a foraged mushroom soup made that day changed his mind.

“If you make those into like a soup, it’s freaking fantastic,” Brant says.

The two began by searching for mushrooms during fishing trips, and ended up spending less and less time fishing. Now mushroom foraging is the primary goal and the two go almost every day if the weather is right — a rainy, wet week is a forager’s delight.

“We were fishing nerds at the time, we weren’t mushroom nerds,” Brant says.

“It’s terrible,” Ball laughs. “I fish in the spring before the mushrooms come now and I took basically the summer off.”

Ball, who is also an avid duck hunter, says going out foraging is sort of nostalgic for him.

“Duck season and mushroom season were always around the same time. If you’re out hunting ducks, you’re always looking for mushrooms. We would always find puffballs when we we’re duck hunting and things like that and really it just snowballed from there. Levi started getting into it. And the first thing we ever went for was chanterelles.”

“Imagine what it’s like panning for gold, right? Where you find that first golden nugget, but it was just a golden chanterelle, and it was like jumping around, screaming like little girls, high fivin’ — throw our fishing rods in the trees, scour the ground for five minutes and end up walking away with a baseball cap full of them,” Ball says.

They have a mushroom bucket list and are always on the hunt for new kinds they haven’t found before.

“It’s like catching a fish for the first time, it’s like, ‘Oh I can’t wait to go there and catch one of these,’ and then you actually catch it and it’s so satisfying,” Ball says.

Asked what the process looks like to get started, Ball says, “I look for six beers and Levi.”

Camaraderie is also a big part of the hunt for the two longtime friends. They’re usually not without a beer in hand while they’re out.

They said there isn’t really a limit on how often you can eat wild mushrooms. Standing in front of a table of mushrooms like hen of the woods, bears head tooth and shaggy manes, Brant says any one of them could be eaten on a daily basis if cooked properly.

“There’s only four species of mushrooms that you can eat raw in Ontario. And that’s just all the excuse to cook all of them well. You can get the right mushrooms, any one of these mushrooms, if you didn’t cook them well, they won’t set with your stomach, and you’re gonna get sick,” Brant says.

Brant says he’s never made himself sick from mushrooms before — though Ball admits he had one experience where he didn’t know how to properly prepare a mushroom and gave himself some stomach trouble.

“I didn’t do enough research that you had to peel the shiny, slimy top off, because it’s nature’s laxative and it was like 30 minutes later I was ‘whoo.’ ”

“I had to hit the loo a couple of times,” he says.

Both said that despite common tales that wild mushrooms will kill you, most of them will just make you sick. Some though, can be lethal and the two advise anyone who is thinking about mushroom foraging to be 100 per cent sure of the mushroom they’re eating before experimenting.

The two have gained their mushroom foraging experience from a variety of sources — some knowledge from mutual friends whose parents were avid foragers, some from books or guided tours, and of course online.

That first time they found chanterelles, they said they didn’t really know how to pick them yet. When they brought them to a friend, he identified them and told them they were full of dirt. However, they’re a prized mushroom. They were told they could probably sell them.

Now that they’ve gained experience as foragers, Ball and Brant do sell their finds to local chefs, who are always eager to get wild foraged mushrooms. They sell for about $25 per pound to chefs.

While it’s not legal to serve wild game in restaurants, mushrooms are legal.

Finding chefs who want them is no trouble, Ball says. You just have to “know your people.”

“You go to the best restaurants in town, go knock on the back door. If you don’t know anyone you say, ‘Hey, where’s the chef? Hey, we got these. You want to buy these?’ Yes sir, no question. If not then on to the next guy. But now we all have cell phones so you just texts all of them. We literally find them in the woods, I text all four of my chefs right now. I’ll text all and be like, ‘What’s up, who wants them?’ The first chef to text me back gets them, that’s it.”

They said the kinds of mushrooms chefs want most are chanterelles and morels — two choice eating mushrooms. As well as lobster mushrooms — which actually taste like lobster.

“The super hard to get ones,” Ball says.

The reason the mushrooms are so prized is because most of them can’t be cultivated. The system for mushrooms requires a forest root system, which can’t be mimicked on a farm or in a greenhouse.

“So the ones that they can cultivate obviously drops the price completely,” Ball says.

Hunting for field mushrooms in a surprisingly public, well-known location in NOTL, Brant says there are certain identifying factors that help foragers know what is edible and what’s not. One is if the mushroom has pink or brown gills — that’s a sign it might be an edible species.

Mushrooms with white gills are “a dead giveaway for a no-eater,” says Brant.

Advice they give to any new foragers is to do your research, and don’t rely on common names. Terms like field mushroom are unreliable, Brant says, and it’s “easier for people to do their research” if they’re looking at the proper Latin names for the mushrooms.

Once you know your fungi, there are other signs to help identify species, like spore prints and checking for staining.

“The top of this one here is yellow. If you were to cut it and have a staining that is yellow on the inside of that mushroom, then that would be a problem,” Brant says, pointing to a common-looking field mushroom.

The two warn against using apps to identify mushrooms, since there are many species that have poisonous lookalikes. They also advise to not post pictures and ask people to identify them, as photos also aren’t always reliable. If people are going to ask for help identifying mushrooms through photos, they should photograph all angles of the mushroom, especially the underside and the tops.

“Do your homework, read a book. Go out 10 times, go out 15 times, don’t even pick a mushroom — obviously pick one, you know, maybe to do your research. Don’t pick 40 mushrooms and go online to be like ‘Can I eat these?’ It just doesn’t look good.”

Mushrooms also have a symbiotic relationship with certain plants and trees. Ball says a big part of learning to forage is knowing your trees.

In front of them are several species of mushrooms. Ball pulls an acorn off of the hen of the woods and says, “That tells you something where they grow.”

The two make loads of different mushroom recipes — puffball pizza with giant puffballs as the crust, battered and deep fried chicken of the woods nuggets, mushroom soups, mushroom jerky. Most types can also be dried and frozen, or ground into powder to add to stocks.

“There’s a reason they call it chicken or hen of the woods,” Brant says.

For those that put in the work, it can be rewarding.

“I grew up doing this and I knew I was always out in those woods. All (these mushrooms) were growing here the entire time … so much wasted youth,” Ball jokes.